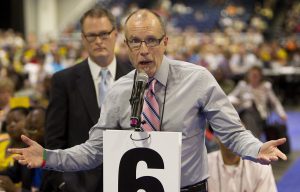 The Rev. Mike Slaughter, front, speaks at the 2012 General Conference in Tampa, Florida. “I support the One Church Plan, but if we can’t agree to disagree, I would support a gracious exit plan that is just,” Slaughter said recently. Photo by Mike DuBose, UMNS.

Recent statements from two different groups portend an agenda of institutional survival taking precedence over resolving the conflict in The United Methodist Church at the upcoming General Conference. Many across the theological spectrum (including many members of the Commission on a Way Forward) have previously said that a gracious exit path for congregations to leave the denomination with their property would be necessary regardless of which plan General Conference adopted. Now, some leaders are pulling back from that position in an attempt to coerce churches into maintaining the current institutional structure.

Reconciling Ministries Network, a pro-LGBTQ organization in the UM Church, recently posted a statement on their Facebook page that demonstrates the level of hypocrisy or denial it takes to try to preserve a broken institution.

They state, “Already built into The UMC are ways to leave the Church agreed upon by the Church.” That is only partly true. The Discipline contains a provision allowing an annual conference to deed a local church property over to “another evangelical denomination.” The conditions for such an action would depend upon whatever the annual conference chooses to impose upon the local church. Some congregations have not been allowed to leave with their building at all, despite the fact that over 90 percent of the members voted to withdraw. Other congregations have been asked to pay large sums to keep their property. The local church is at the mercy of the annual conference, which can choose to be gracious or play hardball in what they require. What congregations are asking for is a fair, gracious, and standardized exit path that assures them there is an equitable way to keep their property.

It is helpful for United Methodists to keep in mind the congregations of brothers and sisters who have attempted to depart from other mainline denominations over issues of marriage and sexuality. The legal fees spent by the national Episcopal Church exceeded $45 million, not including what local churches spent. Presbyterian churches spent millions, and found that the disparity between different presbyteries (equivalent of our annual conferences) in how they treated departing congregations created unfair and often punitive and adversarial conditions. We can learn from their experiences and do better.

The Reconciling Ministries statement goes on, “What we need at General Conference 2019 is the resolve to come together to further the well-being of the Church, not to dissolve it.” The statement thus equates some local congregations leaving the denomination with “dissolving” the church. Such hyperbole does not serve us well and distorts the truth. Even if hundreds of congregations were to depart, there would still be a United Methodist Church. We have nearly 30,000 congregations, and no one is suggesting that all or even most are going to depart. And how is continuing the current conflict (by not allowing those opposed to our standards to leave with their property) “furthering the well-being of the Church?”

Finally, the statement says, “Plans for so-called ‘gracious’ exit are plans for schism, dissolution, and disobedience to the mission of the Church.” It is highly ironic that those causing the schism in United Methodism are now blaming those who want a fair and gracious exit path for fomenting schism. It goes beyond irony to arrogance for those who are currently disobeying the United Methodist Discipline and covenant to be charging those who want an exit path with disobedience.

On the contrary, those desiring an exit path want the church to provide that so the congregation desiring to depart is NOT being disobedient in choosing to do so. Evangelicals and traditionalists have consistently operated within the boundaries of the Discipline.

Those who have fomented this crisis through their own disobedience have no standing to call others schismatic or disobedient, nor to prevent congregations from living out their Christian faith and mission in a way that is faithful to their conscience.

Only slightly less objectionable is a statement from Uniting Methodists, a newly formed caucus group advocating for the One Church Plan, calling for all exit paths to be referred to the 2020 General Conference.

“It’s clear that the first priority for the Body of Christ is always to search for unity rather than division,” said the Rev. Dr. James A. Harnish, spokesperson for the group. While unity is indeed a value for followers of Jesus Christ, there are other even higher values. Values like remaining in Christ (John 15:5), allowing the Word of God to remain in us and bear fruit in our lives (John 15:7), and keeping Christ’s commandments (John 15:10). Faithfulness and obedience to God’s will take precedence over unity. Fostering a “pretend” unity through structural coercion is an unhealthy approach to resolving our crisis.

Traditionalists are not “searching” for division, but recognizing the division that already exists and the practical impossibility of continuing structurally united with those who deny the teachings of Scripture and disrespect our United Methodist identity and covenant.

Harnish further maintains, “Action on exit plans are [sic] not consistent with the primary purpose for establishing the Commission on a Way Forward.” However, if one reads the motions adopted at the 2016 General Conference, they do not anywhere mention preserving the unity of the church. Instead, they reference ending or resolving our conflict and providing a way for the church to move forward. We all wish that we could find a way forward that would preserve the unity of the church. But the deep theological divide and unwillingness of some to submit to our agreed-upon covenant makes unity impossible without repentance and a change of behavior.

Harnish’s final reason for postponing action on exit paths is “Delegates will not have adequate time to gather all of the facts, understand the consequences, and participate in thoughtful debate.” These proposals have been publicly before the church for seven months. Much ink has been spilled with writings on all sides of a complex issue. Delegates have had ample time to study the proposals and understand the possible consequences. If the delegates are not ready to act now, they never will be.

Proposals for exit are found in seven of the 78 petitions to be considered. Only two of them need to be enacted (one from the Modified Traditional Plan allowing transfers out by annual conferences and congregations and one exit path for individual congregations). One of those proposals already passed a legislative committee in 2016. In 2020, General Conference will be considering hundreds of petitions spanning dozens of topics. Despite having more days of sessions, the delegates would not have any more time to focus on the exit paths than they do in 2019.

Even some Uniting leaders have publicly supported an exit path. According to a UMNS article, “the Rev. Mike Slaughter, pastor emeritus of Ginghamsburg United Methodist Church, agrees that exiting the denomination should be done with grace.

“‘I support the One Church Plan, but if we can’t agree to disagree, I would support a gracious exit plan that is just. In other words, one that would come up with a just ‘buyout’ that would cover the liabilities that we are all accountable for. Not unlike divorce, where two parties have to determine fair support for what they have created together,’ he said.”

Since making that statement, Slaughter has reiterated his personal support for an exit path, saying “he doesn’t think discerning a just exit plan should top the agenda but should definitely be part of what’s under consideration. ‘I want to do whatever to keep the majority of us together, and we need to look at that first,’ he said. ‘And then we need to look at, if that doesn’t work for some, how there can be a gracious, just exit.'”

Uniting Methodists’ call to refer the exit path petitions to 2020 is a way to kill those proposals or, at best, once again “kick the can down the road.” If the One Church Plan is adopted, many proponents undoubtedly want to coerce traditionalists into staying in the church so that proponents can continue to try to change our minds while benefiting from our continued financial support of the institutional structure. Our church has reached a decision point on ministry with LGBT persons. Our lay members will not withstand another delay in resolving a crisis that is severely damaging our church’s ability to make disciples of Jesus Christ for the transformation of the world. Delaying any exit path would only exacerbate the conflict in our church, not resolve it.

The question is, do our leaders care more about enabling our church to move forward in effectively carrying out our mission, or about trying to preserve an institutional structure? If the latter, our denomination will continue to decline and the kingdom of God will lose.

Here, another saying of Jesus is instructive. “I tell you the truth, unless a kernel of wheat falls to the ground and dies, it remains only a single seed. But if it dies, it produces many seeds” (John 12:24). We need to be willing to surrender our instinct for institutional self-preservation for the sake of allowing the church to move into a healthier place. We cannot continue to operate in the current way and expect to see fruitful ministry in the years ahead. A healthy institution would allow those who can no longer conscientiously participate in the institution’s mission to amicably withdraw and pursue their own mission as they perceive it. Anything else is simply an institutional power play.