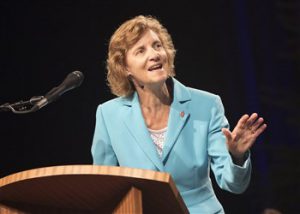 Writing to churches and clergy in the Iowa Annual Conference about financial challenges the conference faces, new Bishop Laurie Haller wrote, “Some of our clergy and congregations are making the decision to withhold apportionment payments to protest those who advocate for full inclusion of LGBTQ people in The United Methodist Church. This intentional action weakens our mutual covenant to be in ministry together here and around the world despite our differences.”

Bishop Haller is woefully misinformed if she thinks churches and clergy are withholding apportionments “to protest those who advocate for full inclusion of LGBTQ people in The United Methodist Church.”

Those who support the church’s sexual ethics, its teachings on marriage, and its ordination standards have never contested the right of LGBTQ+ people and their allies to “advocate” for changing the church’s teachings. They are not naïve; they understand people in a large denomination will not always see eye-to-eye on every matter. They know we have a polity, an orderly way of going about discerning God’s will, and they have willingly engaged in that process for decades. If this were not the case many would have started withholding apportionments long ago, perhaps as far back as the early 1980s.

Here, for Haller and other church leaders who are now learning about the crisis within our denomination, are just some of the actual reasons why some clergy and laity are withholding apportionments, particularly in annual conferences like Iowa.

Haller seriously misjudges and mischaracterizes people who stand at the church’s center when she says they are withholding apportionments “to protest those who advocate for full inclusion of LGBTQ people.”

Nonsense. They are withholding apportionments because of bishops and church leaders who refuse to defend the church’s teachings, its polity, church law, and now even the rulings of its judicial branch.

Faithful United Methodists have decided they can no longer support, in good conscience, a dysfunctional institution. And they certainly have no interest in financially supporting bishops who mock their values and the church they have faithfully supported for years.

Recently, Bishop Haller characterized the aforementioned Rev. Anna Blaedel’s actions as “holy disobedience.” If she takes the time to patiently listen to people at the center of the UM Church who are withholding apportionments, she might come to realize they are acting out of “holy obedience.”