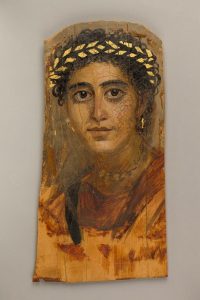 In the early church, Phoebe served as a deacon in the church at Cenchrea, a city near Corinth. The above portrait is of a young woman during A.D. 90–120. Metropolitan Museum of Modern Art.

What follows is a discussion on new paragraphs the Wesleyan Covenant Association is releasing for inclusion in its draft “Book of Doctrines and Discipline” regarding the proposal for the ministry of deacons.

In this season of rapid change and uncertainty, it may be unsettling and difficult to embrace a new structure for clergy orders. But deacons, who often have felt misunderstood and overlooked, can embrace a new vision that provides a stable foundation for their very important ministries.

This vision for a new Methodist denomination takes seriously the call for all believers to join in ministry, sharing the love of Christ and making disciples of all nations. Yet some of these believers are called by God from the laity, set apart for particular service to the Church. When the Church recognizes this calling and ordains deacons through the laying on of hands, these servants are empowered to share Christ in numerous ways both in local churches and the world beyond.

Deacons have a remarkable history of service in diverse ministry settings. Some serve in the local church, assisting elders with the sacraments, teaching and preaching, and providing pastoral care. Others work outside the church in compassion and justice ministries, working with the homeless, serving in food pantries, helping those suffering from addiction, and advocating for the voiceless in society. Still others teach in Christian colleges and seminaries, serve as hospital or military chaplains, or work in other professions too numerous to describe here. In a new traditionalist Methodist church, the Wesleyan Covenant Association believes deacons should continue serving in these vital ministries, and they could remain as deacons indefinitely. As ordained clergy, they would continue to have authority to perform marriages and funerals (see para 502.1 of the draft “Book of Doctrines and Discipline”).

In The United Methodist Church, some deacons have expressed a desire for sacramental authority in their ministry settings. Currently, such authority can be granted by a bishop in special circumstances. Under the provisions envisioned for a new church, the WCA proposes allowing a bishop to grant this authority to a deacon serving as a pastor in a local church, or to a deacon in any specialized ministry setting where the sacraments are required. This language recognizes the fact that the sacraments must, at times, be offered outside of the local church – in places like hospitals, nursing homes, or military bases (see para 508).

According to the UM Church, deacons and elders are separate and distinct, like branches on a tree stretching out in different directions. It seems odd to suggest that deacons are called to Word, Service, Compassion, and Justice, but elders are called to Word, Service, Sacrament, and Order. Are not elders also called, by their very nature as believers, to offer compassion and justice to those in need? And deacons are described as serving in the world and building a bridge back to the church, whereas elders serve by ordering the local congregation. Are not elders also, by their very nature as believers, called to proclaim the name of Christ in the world, bringing the Gospel to the lost?

The WCA, in its draft “Book of Doctrines and Discipline,” suggests a new Methodist church understand elders as called out from the deacons to provide the specific ministry of Word, Sacrament, and Order in the church. Elders would retain their calling as laity and deacons even as they participate in the Order of Elders. This vision of nested ministries, in which each order is called out from the previous one, portrays the interconnectedness of laity, deacons, and elders in a way the UM Church does not. According to the proposed WCA system, these orders would not branch out in different directions. Rather, the specialized ministry of elders would flow out of the specialized ministry of deacons, which would flow from the ministry of all laity, which is grounded in Christ. This linear extension of the body of Christ emphasizes the unified calling of all believers, even as some are set apart for specific ministries.

In the early church, Phoebe served as a deacon in the church at Cenchrea, a city near Corinth. She had helped Paul in his work, and he described her as a “benefactor of many people, including me.” He was so confident of her abilities that he designated her to carry his letter to the Roman churches. In that entrusted position, she would have answered any questions that arose when the Roman believers heard the letter read. In other words, she was entrusted to interpret Paul’s words to the church. Phoebe provides an example of how deacons have performed important roles in the Church since its beginning. In the current time of change and uncertainty, the WCA believes the ministry of the deacon should be retained and celebrated. It believes a new Methodist church should continue to promote and honor the work of those women and men called to serve in the role of deacon.

Suzanne Nicholson is a deacon in the East Ohio Annual Conference and serves as Professor of New Testament at Asbury University in Wilmore, Kentucky. Dr. Nicholson is also a member of the Wesleyan Covenant Association Council and the Assistant Lead Editor for Firebrand magazine.