Misimpressions in Statement from the Western Jurisdiction College of Bishops 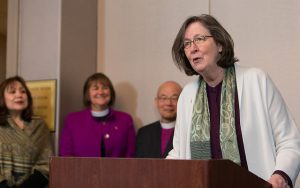 “The ruling is long and complicated,” wrote Bishop Elaine JW Stanovsky in a statement on behalf of the Western Jurisdiction College of Bishops.

Stanovsky was of course commenting on the Judicial Council’s recent decision regarding the Western Jurisdictional Conference’s election and assignment of the Rev. Karen Oliveto as a United Methodist bishop. When she was elected and assigned, it was widely known she was married to another woman.

We certainly join Stanovsky and her colleagues in their assessment that the decision was “long and complicated,” but their statement goes on to make some claims that are misleading.

First, they claim the Council’s decision “reinforce[s] the reality that the church is not of one mind about the inclusion of LGBTQI people and sexual practices outside heterosexual marriage.” No, it does not.

It is not the role of the Judicial Council to read the “mind” of the church. Anyone who reads the decision plainly sees it studiously avoids doing so. Never once, in its 19 page decision, does it say something to the effect of, “the church is not of one mind so we decided to issue a long and complicated ruling to acknowledge that reality.”

The Council’s decision firmly upholds church law regarding its ministerial standards, sexual ethics, and teachings on marriage. And while the Council maintains it cannot declare Oliveto’s election and assignment null and void, it does instruct the Western Jurisdiction’s Committee on Episcopacy to handle complaints filed against her, and to do so according to the standards it repeatedly cites in its decision.

So contra Stanovsky and her episcopal colleagues, no one should read the Council’s decision as if it is meant to be an indicator of the church’s conflicted nature on the matter.

Stanovsky goes on to write, “We thank the Judicial Council for allowing the Commission on A Way Forward to do its work.” Again, a statement like this gives the impression the Council considered a factor it never references in its entire decision. 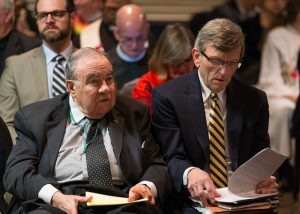 Richard Marsh, the attorney who represented the Western Jurisdiction College of Bishops at the public hearing in Newark, New Jersey, gamely made the case that the Council should defer to the commission. But it was fairly obvious this line of reasoning persuaded none of the Council members. And if it wasn’t obvious then, the 19 page decision made it abundantly clear. Neither the Commission on a Way Forward nor its work is referenced anywhere in the decision, and properly so.

The Judicial Council fulfilled its responsibility to render a decision in the case irrespective of any hypothetical plans the commission will share with the Council of Bishops, and that in turn will be presented to the called General Conference scheduled for February 2019.

Finally, conspicuous by its absence in Stanovsky and her colleagues’ statement, is perhaps the most important decision the Council reached. The Council clearly stated, “It is not lawful for the college of bishops of any jurisdictional… conference to consecrate a self-avowed practicing homosexual.”

This was the very reason the Council determined it had jurisdiction in the case. And it went on to instruct the Western Jurisdictional Conference, its committee on episcopacy, and its college of bishops to review and act on complaints filed against Oliveto.

In Stanovsky and her colleagues’ defense, they said they would have more to say on the ruling. We trust they will help people in the Western Jurisdiction understand the Council’s decision had nothing to do with “reinforcing the reality that the church is not of one mind about the inclusion of LGBTQI people,” or about deferring the matter to the Commission on a Way Forward.

The decision was about Stanovsky and her colleagues. It was about their willingness to consecrate as a bishop a person who, if the instructions of the Judicial Council are sincerely followed, must vacate that office.