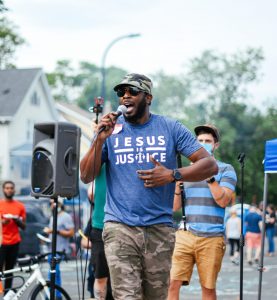 Jonathan Tremaine (JT) Thomas of Civil Righteousness, a ministry out of Ferguson, Missouri.

In the midst of waves of protests around the globe in response to the death of George Floyd, there were also worship services in communities that brought Christians of different ethnicities together to sing and pray, mourn and lament.

In the week after Floyd’s death, open-air services were conducted at the street corner of 38th and Chicago in South Minneapolis – the site of Floyd’s death – featuring gospel music, evangelistic preaching, calls for racial justice, Christian reconciliation, and the infilling of the Holy Spirit.

The services were launched by Pastor Curtis Farrar of the Worldwide Outreach for Christ, a congregation located at the street corner for 38 years. As protesters and mourners flocked to the memorial site, Farrar’s congregation offered free water, food, and antiseptic spray. From a street corner platform, he preached and members of his congregation led worship and prayer. Farrar was also joined by young evangelists such as Christophe Ulysse of Youth With a Mission (YWAM); Yasmin Pierce with Circuit Riders, a ministry from Southern 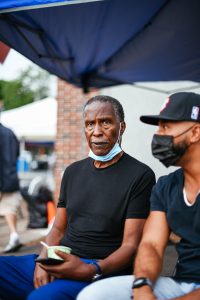 “I’m seeing that people are responding in a positive way,” Farrar told a television station in Minneapolis. “I’ve never seen so many people come together on this corner. I’ve been here 38 years and I can see the peace and camaraderie and everyone’s helping one another.”

“This is a wakeup call to the world that we’re all morally bankrupt apart from God,” Ulysse told the Brantford Expositor. “There are so many narratives that are trying to hijack what’s going on. But this racism is a deep thing that we need a higher power to address.”

Ulysse, who lives in Hawaii, was born to mixed-race parents. “I have the advantage of being bi-racial so I can understand the beauty of both worlds and be a bridge,” he said. “My dad taught me if people called me the N-word, it was because they had never really met one of us. So, it’s our place to educate them and show them what we are really about. To the ignorant, we must become ambassadors.”

Working with Farrar, Ulysse said that, during his time at the Floyd memorial, he saw hearts “turn from hatred, resentment, bitterness, and hopelessness,” as people of different races wept and hugged each other. He hoped that his message to the protesters and mourners would ultimately empower them to be “carriers of hope.”