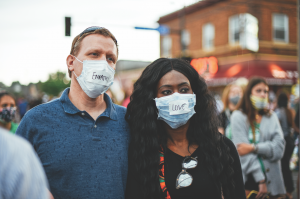 Mourners and protesters gather at the corner of 38th and Chicago in Minneapolis – the place of George Floyd’s death – to reflect, grieve, and hear the message during a service sponsored by the Worldwide Outreach for Christ – a church in that neighborhood for 38 years. The congregation hosted open-air evangelistic and prayer services for those in the community. Photo by David Parks.

At its founding in its Statement of Moral Principles, the Wesleyan Covenant Association declared, “We believe that all persons are of sacred worth…. The WCA specifically renounces all racial and ethnic discrimination and commits itself to work toward full racial and ethnic equality in the church and in society.” Recent events in the United States underscore how absolutely critical this work is.

We are outraged by the murders of Ahmaud Arbery, Breonna Taylor, and George Floyd. The horrific taking of each of their lives cries out for justice. Yet what they experienced were not isolated incidents. Racism, systemic injustice, and the use of force leading to the killing of African Americans is an affront to God’s good gift of life and human dignity. It has no place in the body of Christ or in any society that aspires to reflect the character of Jesus. It is sin.

As Christians we are called to relentlessly work for a society where African Americans no longer have to fear for their lives or be treated differently when encountered by law enforcement, or when they are simply going about the business of their daily lives. We must dedicate ourselves to building a church that bears witness to the dignity of all God’s people, particularly those who have been marginalized, stereotyped, and treated with cruelty and violence based on the color of their skin. The church must summon every fiber of its being to root out racism in its midst. Collectively and individually, we must examine our hearts, our minds, our institutions, and our practices, and, with unwavering determination, stamp out racism.

The battle against the evil of racism requires far more than an occasional statement or symbolic ceremony. Rooting out the conscious and unconscious ways in which we diminish others requires perseverance and disciplined focus. We must continually call ourselves to account. We must empower others to speak truth into each of our lives. There is no room for rationalization or justification. The work requires persistent, sacrificial discipline proactively engaging our own prejudices, biases, and actions, and engaging the ways in which those prejudices and biases have found expression in the systems of which we are a part. The work calls us to intervene and speak up when we are witnesses to racism and systemic injustice. We must overturn systemic injustices.

At its foundation, Scripture calls us to acknowledge that every person we encounter is made in the image of God – nothing diminishes or obviates that reality. Therefore we Christians must accord all people their human dignity, defend their God-given rights, and see that justice is done for them just as we expect it to be done for ourselves.

Sadly, we have failed to “make justice a reality for all God’s children.” We must acknowledge our failure and redouble our commitment to work toward full racial and ethnic equality in the church and in society. Let us not relent or rest until we have achieved that reality.

Keith Boyette is president of the Wesleyan Covenant Association and an elder in the Virginia Conference of The United Methodist Church.