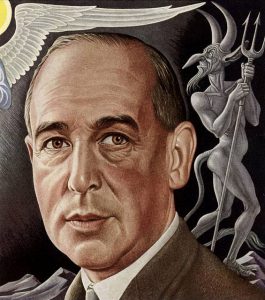 On November 22, 1963, the world’s foremost Christian apologist died of kidney failure. Despite his literary fame, in the following week’s newspapers, his death was overshadowed by the assassination of John F. Kennedy, and received little notice. The New York Times made up for the oversight and published an obituary three days later, on November 25, chronicling the main features of Lewis’s life and work. (Though they did misspell Narnia as “Narvia.”)

Today, however, C. S. Lewis is still the world’s foremost apologist, and his literary fame eclipses the fame of many U.S. Presidents. Lewis’ Mere Christianity is currently the top-selling work of apologetics on Amazon.com. Christianity Today recently dubbed it the “Book of the Century.”

Lewis’ prominence as a fiction writer is even more secure than his fame as an apologist. His Christian fantasy series, The Chronicles of Narnia, has sold over a hundred million copies. Over the last 10 years, the first three books in the Narnia series were adapted by Hollywood and grossed over a billion dollars. The only other fantasy author who tops Lewis’ fame is his long-time friend and fellow Oxonian, J. R. R. Tolkien.

For a man who once described himself as a “dinosaur,” Lewis’ legacy shows no sign of going extinct. For those who have read almost anything by Lewis, his staying power isn’t surprising. His prose is chatty and charming. He manages to be crystal clear whether he’s discoursing on hell or 16th century English literature.

Take, for example, Lewis’ chapter from Mere Christianity on the Trinity – a topic that sends many preachers into stammers or silence. In a brisk five pages, Lewis describes Augustine’s theology of the Trinity in layman’s language and offers several concrete and helpful analogies that most readers can easily visualize.

“An ordinary simple Christian kneels down to say his prayers. He is trying to get into touch with God. But if he is a Christian he knows that what is prompting him to pray is also God: God, so to speak, inside him. But he also knows that all his real knowledge of God comes through Christ, the Man who was God — that Christ is standing beside him, helping him to pray, praying for him,” Lewis wrote. “You see what is happening. God is the thing to which he is praying — the goal he is trying to reach. God is also the thing inside him which is pushing him on — the motive power. God is also the road or bridge along which he is being pushed to that goal. So that the whole threefold life of the three-personal Being is actually going on in that ordinary little bedroom where an ordinary man is saying his prayers.”

Lewis lets us into the experience of the Trinity: the Father before us, the Son beside us, the Spirit within us. Nowhere does he use anything but plain, ordinary language. The only word with more than three-syllables is “ordinary.”

This was Lewis’ gift. He could channel the best of the Christian tradition effortlessly. Nowhere does one feel him talking “down” to the reader. Despite being trained in the best schools in England, Lewis thought the best language to describe an idea was the kind of conversation carried on in the pubs and pews (both of which Lewis inhabited frequently).

Lewis also channels the great thinkers of the Christian tradition. Without realizing it, the reader of Lewis’ work will be introduced to key ideas from Thomas Aquinas, Augustine, and Athanasius. Owen Barfield, a friend and sparring-partner of Lewis’, described this as Lewis’ “presence of mind.” Barfield wrote, “somehow what [Lewis] thought about everything was secretly present in what he said about anything.” To read Lewis is to get a walking tour (often without knowing it) of some of the most important ideas in Western civilization.

Yet in Lewis’ best and most lasting work, the effortlessness of Lewis’ prose transmitted ideas that Lewis had struggled and fought with for decades. His confidence in the truth of Christianity did not come effortlessly. He fought for years against the existence and goodness of God, the truth of the resurrection, and the meaning of Christ’s sacrificial death.

As a young man, Lewis’ mother died of cancer. This and other setbacks as a boy darkened Lewis’ view on life. The world was a place of frustration and pain, and so Lewis and his brother retreated into the world of imagination. Coming eventually to deny God’s existence altogether, Lewis searched for beauty in romantic poetry and heroic mythology.

For Lewis, everything beautiful was fictional, while reality was depressing. As he wrote in his autobiography, Surprised by Joy: “Such, then, was my position: to care for almost nothing but the gods and heroes, the garden of the Hesperides, Launcelot and the Grail, and to believe in nothing but atoms and evolution and military service. At times the strain was severe…”

This strain on Lewis continued from his adolescence through his early career, until he struck up an unlikely friendship with J. R. R. Tolkien. As a Northern Irishmen, Lewis had a cultural bias against Catholics. Prejudices in the English department made the friendship even more improbable: “When I arrived in this world, they … warned me to never trust a papist, and upon my arrival in the English faculty, they (openly) warned me never to trust a philologist. Tolkien was both.”

Despite the implausibility of the pairing, Lewis and Tolkien’s friendship blossomed, and led to a crucial conversation between the men that changed Lewis’s perspective. One windy evening in Oxford, Lewis, Tolkien and another friend met in Lewis’s rooms at Magdalen College and talked late into the night.

What Lewis learned was that beauty and truth do not necessarily have to be at odds. Lewis loved mythology but thought beautiful stories could not be true because reality was ultimately ugly – our best imaginings cut against the grain of the universe. Tolkien showed Lewis that the very capacity to dream, to create beauty, was a sign that reality was not ultimately ugly. God created us with a deep desire to imagine. In short, our capacity for making fiction – for telling stories of gods and heroes, Launcelot and the grail – was a pointer toward the truth that reality was ultimately beautiful.

This “good satisfying talk” changed Lewis’ perspective on the the story of the Bible and, in short order, led to Lewis’ conversion. Almost immediately Lewis began combining his rational capacities and his imagination. In 1933 he published his first work of imaginative apologetics, an allegory of his conversion called The Pilgrim’s Regress, an interesting, if not wholly successful, marriage of fiction and philosophy.

Lewis’ first big success as an apologist would not emerge for another seven years. Invited to write on the problem of evil, a subject Lewis was personally familiar with, The Problem of Pain established Lewis’ voice as a Christian apologist and led to his invitation to give a series of wartime radio talks on the Christian faith. These talks would later be collected and published as Mere Christianity.

Perhaps Lewis’ most potent and lasting legacy, however, was the way he expressed his Christian worldview through the world of fiction. Beginning with The Screwtape Letters in 1942, Lewis found ways to sneak past what he called the “watchful dragons” of cultural suspicion against the faith. Through the satirical and scabrous voice of Screwtape, we see the Christian life rightly again because we are forced to look at it topsy-turvy.

“Your patient has become humble,” Screwtape wrote to his nephew, the tempter-in-training Wormwood, “have you drawn his attention to the fact? All virtues are less formidable to us once the man is aware that he has them, but this is specially true of humility.” Lewis in a nutshell: imaginatively re-engaging the Christian tradition. In one stroke he was passing on moral wisdom, introducing us to a classical understanding of the virtues, using common language, and filtering it all through the lens of fiction.

The Chronicles of Narnia stands as Lewis’ ultimate achievement in re-enchanting the Christian faith by helping us to see it with fresh eyes. We see God again in Narnia in the form of Aslan, the creator and savior of a parallel world discovered by some English children named Peter, Susan, Edmund, and Lucy. Aslan is a big, joyful presence: gentle with the children and yet, at turns, fierce when facing off against evil. In The Voyage of the Dawn Treader, when Edmund and Lucy have to return to England, never to return to Narnia, their words echo the sentiments of many readers. Speaking to Aslan, she said:

“But you shall meet me, dear one,” said Aslan.

“Are-are you there too, Sir?” said Edmund.

“I am,” said Aslan. “But there I have another name. You must learn to know me by that name. This was the very reason why you were brought to Narnia, that by knowing me here for a little, you may know me better there.”

Stealing past the “stained-glass” associations we have with Jesus, Lewis awoke love for God’s goodness through the figure of Aslan.

There is another contribution that often goes unnoticed even by Lewis’ many fans. Though Tolkien was instrumental in helping Lewis convert to the faith, Lewis, in turn, helped Tolkien to finish The Lord of the Rings. Tolkien was a perfectionist and easily distracted, a deadly combination for completing any major work. Only through the steady encouragement of Lewis and a few others did Tolkien finally complete his great work. Such are the designs of providence that these two men connected. If not for their friendship, it’s likely we would not have Narnia or Middle-Earth.

Lewis brought the best out of Tolkien through the gift of friendship. For many, many readers of Lewis, he has served in this way as well: walking beside us, keeping company, teaching, and helping us to see how to wrestle with our own doubts.

Philip Tallon is a member of the Honors College faculty and Chair of the Apologetics Department at Houston Baptist University. He is also the author of The Absolute Basics of the Christian Faith: A Quick Sketch of Biblical Beliefs, The Poetics of Evil, and the co-editor of The Philosophy of Sherlock Holmes. You can find him on Twitter (@philiptallon). This article first appeared in the November/December 2013 issue of Good News.