Lessons from the Wesleyan Revival 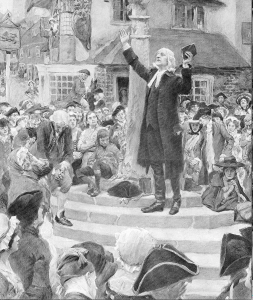 Famous nineteenth-century lithograph by William Hatherell (1855-1920) of John Wesley preaching from the steps of a market cross.

On a recent trip to England, I visited several of the historic sites of the Wesleyan revival with a friend. One of the places we visited was City Road Chapel in London, founded in 1778 by John Wesley. We toured the chapel and walked around Wesley’s home. Later, we paused and prayed at Wesley’s tomb. Standing there, I was inspired to read these words on his tombstone, an apt description of his enduring legacy:

“To the memory of the venerable John Wesley, A.M., late fellow of Lincoln College, Oxford. This great light arose (by the singular providence of God) to enlighten these nations, and to revive, enforce, and defend, the pure apostolic doctrines and practices of the primitive church: which he continued to do, both by his writings and his labours for more than half a century: And to his inexpressible joy, not only, beheld their influence extending, and their efficacy witness’d in the hearts and lives of many thousands, as well in the western world as in these kingdoms: But also, far above all human power of expectation, liv’d to see provision made by the singular grace of God, for their continuance and establishment to the joy of future generations. Reader, if thou art constrain’d to bless the instrument, give God the glory.”

These words remind us that once upon a time, a man named John Wesley helped start a movement that led to the cultural transformation of the English nation, a movement that eventually spread around the world. But how? And why? What made this man and this movement unique? Why did the teachings of Wesley and his practices ignite a wildfire, while other movements began and fizzled out?

Perhaps there is something in what Wesley learned and what he did that we can learn from today. In fact, let me go one step further. Scholars and church historians know the significance of the story of the Wesleyan revival; however, I have discovered that very few people outside Methodism know anything about this movement and its potential impact for the church today. I believe that the life and ministry of John Wesley has something we desperately need today.

John Wesley sought to recover a basic understanding of what it means to be a real Christian. His original vision was to bring spiritual renewal to the Church of England, which was not well received. Yet despite the growing tension between Wesley and the institutional church, both he and his brother, Charles, were ordained in the Church of England.

By the time of John Wesley’s death in 1791, Methodism was an international church movement with more than 70,000 members in England and more than 40,000 in the new United States, with even more among the mission stations scattered around the world. The seeds of the Methodist movement would continue to grow and spread well beyond Wesley’s lifetime. Just a few years after his death, Methodism in North America had grown to 200,000, with more than 4,000 Methodist preachers. By 1830, official membership in the Methodist Church had reached almost half a million people, and attenders numbered six million. From 1880 to 1905, American Methodism planted more than seven hundred churches per year on average.

At the heart of the Wesleyan revival was the rediscovery of “the pure apostolic doctrines and practices of the early church.” But Wesley did more than read and study the past. He took what he learned and reapplied it, contextualizing it to his own time and place. More than that, he used what he learned to create a disciple-making movement that equipped and empowered thousands of people to join in God’s mission.

Many people want to see the church become a movement again. As much as we want to see a movement today, most of us are unable to envision what that might look like. We are familiar with the status quo, the existing models of church that are largely focused on group gatherings for worship and teaching. To begin to clarify our vision, we can benefit from a closer look at church history. There is no better example of a successful church multiplication movement in the West than the Methodist movement of the eighteenth and nineteenth centuries. I believe it serves as an indispensable paradigm for how we can multiply today’s church. There are six essential marks of the Wesleyan revival, marks that have some correlation to the marks of other renewal movements.

These six marks provide a genetic structure – much like the DNA in a living organism – mutually working together to create the movement dynamics that led to the Wesleyan revival. It is most helpful to church leaders to think of them as an interconnected ecosystem rather than focusing on the individual parts. Although this list is neither authoritative nor comprehensive, it is designed to offer a simple and accessible snapshot of the key elements that made the Wesleyan revival such a success.

1. Changed Lives. Movements begin as people’s lives are changed by a fresh encounter with the living God. Movements often begin with a catalytic leader like John Wesley, Jonathan Edwards, or William Seymour whose life has been touched by God. Sometimes the change is a conversion experience. At other times it is a personal renewal that results in a radical commitment to follow Christ. Movements are not primarily about numbers or slogans, but about changed lives that lead to broader cultural transformation. In renewal movements, there is usually a tipping point where the transformation occurring in the lives of individuals as they embrace a vision for renewal begins to spread like wildfire, leading to broader social and cultural change.

2. Contagious Faith. Movements become contagious when ordinary people share their faith with others. One of the reasons a movement grows and spreads is because it has a simple, life-changing message that ordinary people can easily understand and share with others. Revival can spread as people rediscover the simplicity of the gospel or an essential aspect of the Christian faith that inspires and mobilizes them to action. A common feature of these revival movements is an invitation to commit or join a cause, which is effective in helping recruit others to join the movement. In Christian movements, this growth often results from a renewed passion to share the gospel with others, and this passion spreads from one person to another like a contagion. During the Wesleyan revival, while Wesley and other leaders were effective in preaching to large crowds, it was ordinary men and women who were most effective in spreading the Christian message across England and into North America, resulting in the faith of millions of new believers.

3. The Holy Spirit. Movements emphasize the person and work of the Holy Spirit in peoples’ lives. Fresh encounters with the Holy Spirit create a renewed sense of spiritual vitality among the followers of Christ which leads to personal and corporate renewal. More specifically, the reciprocity of the Word and the Spirit interacting together offers a potent mix that renews peoples’ faith and compels them outward to engage the world in mission. The Word of God becomes the foundational authority and guide for life, while the Holy Spirit fills and empowers people to live holy lives and to share their faith with others.

4. Discipleship Systems. Movements develop systems for discipleship and spiritual growth. This frequently looks like some form of small group structure to facilitate ongoing spiritual growth and commitment. As he preached to large crowds, Wesley quickly discovered that preaching alone was not enough; people needed ongoing support, community, and structure to help them continue on the spiritual journey. To remedy this, he developed a holistic ecosystem designed to help people grow at every stage of their journey. This involved an interlocking discipleship group structure. Each of these structures gathered people into groups of different sizes focused on different aspects of the discipleship process in order to help individuals grow in their faith. There were also spiritual practices that undergirded and reinforced the entire discipleship system.

5. Apostolic Leadership. Movements have an apostolic impulse – drawn from the models and methods of the early church – that empowers and mobilizes all of God’s people for mission. John Wesley and the early Methodists were not trying to be innovative or original. They drew their inspiration from the faith and spirituality of the early church, especially the church of the first two centuries (the pre-Constantine era). Methodism has been referred to as a lay apostolic movement within the Church of England, which alludes to the recovery of ministry for every Christian believer, not just the ordained leadership. The apostolic impulse of the early church to spread the gospel and plant new churches moved the early Methodists to develop ways to empower and release every member of the body of Christ to use their gifts and talents for God. Wesley personally worked to empower thousands of laity, many who later became leaders of the movement. These ordinary, non-ordained Christian men and women became the foundation of the next generation as the movement spread across the Western world in the eighteenth and nineteenth centuries.

6. Organic Multiplication. Movements have an outward missional focus that naturally leads to the multiplication of disciples and new communities of faith. Movements don’t become movements by naval gazing, but by looking outward, by inviting people in, and by growing and multiplying its mission and influence. There is a natural dynamism and excitement among the people that makes them contagious, helping the movement spread widely and organically from one person to another. We can describe the growth of movements as organic because it tends to happen naturally, rather than being forced by the leadership at the top level. Movements look outward and grow and multiply as people’s lives are changed, they begin making disciples, and then start new ministries and communities of faith to facilitate the ongoing growth of more individuals.

Unique Moment. Every movement and every context is unique. The Methodist movement successfully responded to the unique needs of its time with the timeless gospel of Jesus Christ. In a similar way, we must seek to understand our unique context and culture, to bring God’s timeless Word to a changing culture.

My prayer is that in some small way, reading this article has led you to draw inspiration from the Wesleyan movement. I hope and pray that in learning about John Wesley, the Spirit will spark a similar multiplication movement yet again. May the Sovereign Lord do something powerful again in our day.

Winfield Bevins is director of church planting at Asbury Seminary and author of Marks of a Movement: What the Church Today Can Learn from the Wesleyan Revival (Zondervan,)