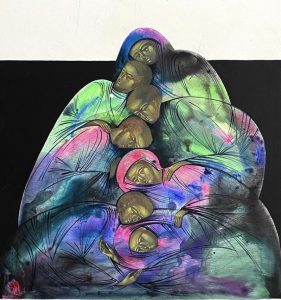 “We are together” by Kateryna Shadrina of Lviv, Ukraine. Used by permission of the artist.

It was standing-room-only for the noon Ash Wednesday service at my local church. Ushers were pulling folding chairs out of a closet and people were sitting in the hallway outside the sanctuary. Parishioners were literally standing against the back and side walls. It was probably a fire hazard.

We were all squeezed in to be reminded of our mortality. “Remember that you are dust,” the pastor said as the sign of the cross was smudged on my forehead, “and to dust you shall return.” Stark and sobering.

Six thousand miles away, there were believers in Ukrainian bomb shelters. At the time, the brutal invasion had only been a week old. “We survived yet another horrible night,” reported the archbishop of the Cathedral of the Resurrection in Kyiv on the first Sunday of Lent – the introspective season of denial leading up to Easter.

“But after night, there comes day, there is morning,” he said. “After darkness, there comes light, just as after death there comes resurrection, which we all today radiantly celebrate!”

This has been the consistent Christian witness throughout time and proclaimed among all nationalities – across all borders and time zones and languages.

Ash Wednesday is to remind us that we are mortal. Easter reveals that we, too, can experience everlasting life.

This statement of commitment became all the more vivid when I saw an unattributed photo of a young priest preparing to serve communion in a concrete bomb shelter. I could not help but think of the pastoral challenge for Ukrainian clergy responding to the needs of their flocks. Lent would be brutal.

Yet, this priest was just one of the inspirational and provocative images of love, commitment, and Ukrainian resilience displayed in the midst of this horrific geopolitical tragedy.

• There was the photograph of the baby strollers left on the platform at a train station in Poland for soon-to-be-arriving refugees who would need them.

• There was a short video clip on the evening news of two flamboyantly dressed-up entertainers dancing and singing with children in one of the subway bomb shelters. Sheer joy was the expression on the faces of the little ones. For just a fleeting moment, they were able to simply be kids rather than displaced war pawns living underground with no knowledge of when they can return home – or if they even still had a home. At the end of the performance, the children all got a small trinket. They were elated.

• There are the internet videos of musicians playing in apartment basements and subterranean bomb shelters to lift the spirits of their neighbors. Vera Lytovchenko, a violinist for the Kharkiv Theater of Opera and Ballet, has given impromptu concerts for her neighbors. “In the cold, cramped basement, with nothing in the way of decoration except candles and yellow tulips, she has performed Vivaldi, Tchaikovsky, and Ukrainian folk songs,” reported the New York Times.

“My music can show that we are still human,” she said. “We need not just food or water. We need our culture. We are not like animals now. We still have our music, and we still have our hope.”

One set of my maternal great grandparents migrated to the United States in 1875 from Ukraine. They moved here shortly after having been married in Odesa. Today, there are battleships off Odesa’s coast in the Black Sea.

Right after the invasion began, a young Ukrainian couple were on the local news collecting blankets and jackets and socks to send to refugees. I noticed that their business was not far from my home.

When I arrived, there were boxes of diapers stacked up in the front window of Grace’s Nutrition Market. Local people had been dropping supplies by the health food store in order to help the beleaguered victims of war. Greeted with warmth and a smile by the staff, I asked about the diapers. A kind woman asked if I wanted to see the rest of the operation. Moments later we were walking through the shop and then through a dimly lit storage area before she opened up the door to the back alley. As we walked out into the bright Texas sunlight, I almost burst into tears. About a dozen women of various ages were packing supplies around 10 folding tables. There was the sound of a vacuum-sealer as they diligently and faithfully packaged blankets and coats in plastic to be put in a shipping container on its way to Poland. This was a small and potent outpost of compassion.

“Remember that you are dust, and to dust you shall return,” we are rightly reminded during Lent. At the same time, we are far more than dust. We are fearfully and wonderfully made in the image of God. This life is filled with blessings and tragedy, as well as miracles, mystery, and beauty. “Don’t forget to show hospitality to strangers,” instructs the ancient scribe, “for some who have done this have entertained angels without realizing it” (Hebrews 13:2).

What I saw in the back alley was more than inspirational. I could barely hold back my tears. I watched with heartfelt appreciation as those volunteers poured their love into the work.

As we walked back through the shop, I told my new friend that I felt so helpless as I watched the news and saw the lines of tanks and buildings destroyed by bombs. She looked in my eyes and said, “Don’t forget to pray. Prayer can move mountains.” I would never argue with her about that.

Lord, in your mercy, hear our prayers.