How We Open Our Hearts to God 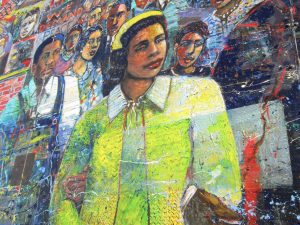 Throughout the epic freedom struggle of African Americans, our great sustainer of hope has been the power of prayer. We prayed for deliverance in a dozen African languages, chained to the holds of slave ships, on the auction block, in the fields of oppression, and under the lash. We prayed when we “followed the drinking gourd” on the Underground Railroad. We prayed when our families were torn asunder by the slave traders. We prayed when our homes and churches were burned and bombed and when our people were lynched by racist mobs. So many times it seemed our prayer went unanswered, but we kept faith that one day our unearned suffering would prove to be redemptive.

As a young child growing up in Marion, Alabama, I remember my pastor at Mt. Tabor Church responding to the racial abuse of one of our congregation by saying, “God loves us all, and people will reap what they sow. So just keep on praying. Don’t worry. God will straighten things out.” I believed he was right then, and I believe it still.

My parents made sure that prayer would be a regular part of my life, and it has been to this very day. Prayer is how we open our hearts to God, how we make that vital connection that empowers us to overcome overwhelming obstacles and become instruments of God’s will. And despite the pain and suffering that I have experienced and that comes to all of our lives, I am more convinced than ever before that prayer gives us strength and hope, a sense of divine companionship, as we struggle for justice and righteousness.

Prayer was a wellspring of strength and inspiration during the Civil Rights Movement. Throughout the movement, we prayed for greater human understanding. We prayed for the safety of our compatriots in the freedom struggle. We prayed for victory in our nonviolent protests, for brotherhood and sisterhood among people of all races, for reconciliation and the fulfillment of the Beloved Community.

For my husband, Martin Luther King Jr., prayer was a daily source of courage and strength that gave him the ability to carry on in even the darkest hours of our struggle. I remember one very difficult day when he came home bone-weary from the stress that came with his leadership of the Montgomery Bus Boycott. In the middle of that night, he was awakened by a threatening and abusive phone call, one of many we received throughout the movement. On this particular occasion, however, Martin had had enough.

After the call, he got up from bed and made himself some coffee. He began to worry about his family, and all of the burdens that came with our movement weighed heavily on his soul. With his head in his hands, Martin bowed over the kitchen table and prayed aloud to God: “Lord, I am taking a stand for what I believe is right. The people are looking to me for leadership, and if I stand before them without strength and courage, they will falter. I am at the end of my powers. I have nothing left. I have nothing left. I have come to the point where I can’t face it alone.

Later he told me, “At that moment, I experienced the presence of the Divine as I had never experienced Him before. It seemed as though I could hear a voice saying: ‘Stand up for righteousness; stand up for truth; and God will be at our side forever.’” When Martin stood up from the table, he was imbued with a new sense of confidence, and he was ready to face anything.

I believe that this prayer was a critical turning point for the African-American freedom struggle, because from that point forward, we had a leader who was divinely inspired and could not be turned back by threats or any form of violence. This kind of courage and conviction is truly contagious, and I know his example inspired me to carry on through the difficult days of my journey.

A few nights after Martin’s moment of truth, I had mine. I was sitting in my living room in Montgomery, chatting with a friend, while my new baby daughter, Yolanda, was asleep in the back room. Suddenly, we heard a loud thump on the front porch. Because of all the recent threats, I urged my friend to get up. “It sounds as if someone has hit the house. We’d better move to the back.”

As we moved toward the back, we felt a thunderous blast, followed by shattering glass and billowing smoke. I hurried to Yolanda’s room and thanked God that she was all right. I called the church where my husband was speaking, but he was addressing the audience at the time. He called me back shortly afterward as a large crowd gathered at our house, and then he rushed home.

The crowd was angry at what had happened, and there was a lot of tension between the police and those who had gathered, some of whom were armed with guns, rocks, and bottles. In the midst of all of the turmoil, I said a silent prayer for the protection of our family and the restoration of peace. Then Martin began to speak to the crowd from the front porch of our home. “My wife and baby are all right, ” he said. “I want you to go home and put down your weapons. We cannot solve this problem through retaliatory violence. We must meet violence with nonviolence.”

As Martin continued to speak, I was enveloped by a growing calm. “God is with us,” I thought. “God is truly with us.” The fear and anger around me began to melt like the receding snows of spring. Almost at that moment, Martin concluded his remarks to the crowd: “Remember, if I am stopped, this movement will not stop, because God is with this movement. Go home with this glowing faith and this radiant assurance.”

Martin’s speech on that day was yet another crucial turning point for our freedom struggle because it set the tone of nonviolence that gave our movement its unique credibility and enabled all of the victories we achieved under his leadership.

From that day on, I was fully prepared for my role as Martin’s wife and partner in the struggle. There would be many more days of difficulty and worry, and there would be many more prayers. But the unwavering belief that we were doing God’s work became a daily source of faith and courage that undergirded our freedom movement.

It is said that every prayer is heard and every prayer is answered in some way, and I believe this is true for people of all faiths. I still believe that the millions of prayers spoken by African Americans from the Middle Passage on down to today have been heard by a righteous and loving God.

Coretta Scott King (April 27, 1927 – January 30, 2006), the late widow of the Reverend Martin Luther King, Jr., was the Founder and former Chairman, President, and CEO of The King Center for Nonviolent Social Change in Atlanta, Georgia. Mrs. King was a human rights activist for more than 40 years.

This excerpt appeared in the March/April 2004 issue of Good News. Reprinted from “Standing in the Need of Prayer” from the Schomburg Center, with permission from The Free Press, a division of Simon & Schuster.