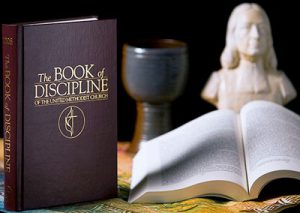 The Book of Discipline. A UMNS photo by Mike DuBose.

There are two proposals that would change United Methodism by creating different regional versions in the various geographical areas of the church: Africa, Europe, the Philippines, and the U.S. One proposal is from the Connectional Table and the other is from a group of delegates from outside the U.S. called the Christmas Covenant.

I have written about the Christmas Covenant before in more detail. At present, the Christmas Covenant seems to be the version of regionalization most preferred by church leaders. It sets up the UM Church in the U.S. as its own regional conference and creates regional conferences in Africa, Europe, and the Philippines. Each regional conference (including in the U.S.) would have the ability to change any part of the denomination’s Book of Discipline that it wants to change, except for items that the church Constitution protects or items that are protected by a two-thirds vote of the General Conference.

Proponents of regionalization say that the reason for this proposal is to allow United Methodism to adapt to the different ministry contexts found in each geographical area of the world. They say that a one-size-fits-all version of Methodism does not work. In addition, proponents state that central conference delegates are tired of dealing with reams of petitions at General Conference that pertain only to United Methodists in the U.S. They want to focus on global matters at General Conference and allow each region to work independently on matters germane to that region.

However, some proponents and other church leaders have seized on the idea that, if regionalization is adopted, separation would no longer be necessary, since each region in the church could adopt its own standards regarding sexuality, marriage, and ordination. Such an understanding fails to take into account the real dimensions of our church conflict.

Regionalization for the U.S.

First, it is important to understand that regionalization proposals would primarily benefit United Methodists in the U.S. Those in the central conferences outside the U.S. already have the power to change and adapt the provisions of the Book of Discipline to fit their ministry and legal context. The 2016 General Conference even moved in the direction of expanding that ability to adapt the Discipline. In light of the crisis point in our conflict, that expansion was put on hold but could easily be taken up again in the future.

U.S. United Methodists were not originally given the power to adapt provisions of the Discipline for two reasons. First, U.S. delegates were always in the overwhelming majority and still make up about 55 percent of the delegates. Second, there is no one unified U.S. conference, as the country is divided up into five jurisdictions. Giving each jurisdiction the authority to adapt the Discipline was seen as a bridge too far, creating too much diversity within one country. Besides, U.S. delegates were essentially writing the Discipline for their context, while giving non-U.S. United Methodists the ability to change what did not work in their settings. Giving the U.S. church the ability to adapt was unnecessary.

But things have changed and are changing. The U.S. percentage of the General Conference is at its lowest point ever. As Methodism in the U.S. continues to decline dramatically and Methodism in Africa continues to grow significantly, within eight to twelve years, U.S. delegates could be in the minority.

Regionalization’s Impact on Marriage and Ordination

If the U.S. church is given the power to adapt the Discipline that the central conferences currently have, and if that power is expanded to cover more parts of the Discipline (as the Christmas Covenant envisions), the situation would change dramatically. The global definition of marriage as between one man and one woman could be changed to allow for same-sex marriage in the U.S. church. The global requirement that all clergy should be celibate in singleness or faithful in a heterosexual marriage could be changed to delete the word “heterosexual,” or the requirement for celibacy and faithfulness could be struck out altogether in the U.S. (as at least one petition to the 2020 General Conference proposes). The provision barring clergy from performing same-sex weddings could be removed in the U.S. The chargeable offenses holding clergy accountable on these matters could be scrapped in the U.S.

Traditionalists would not object to this kind of regionalization for the U.S. church after separation occurs. After all, many traditionalists would not remain in the UM Church after separation and would therefore have no standing to determine how the UM Church is governed after separation. In fact, the Protocol for Separation envisions “The Council of Bishops will call the first session of the General Conference of the post-separation United Methodist Church to organize itself and, if such legislation has not been passed, consider matters pertaining to the Regional Conference plan.”

However, traditionalists would strenuously object to regionalization as a substitute for separation.

The key point to remember is that our church’s conflict is not geographical, and a geographical solution does not resolve the conflict. That was the fatal flaw of the One Church Plan rejected by the 2019 General Conference.

Creating the U.S. as a separate region of the church without allowing for separation would simply trap traditionalists in a centrist/progressive church, with no real recourse to withdraw, other than to leave behind buildings and assets. (The current exit path adopted by the 2019 General Conference is too expensive for most congregations, requiring seven to twelve years’ worth of apportionments as the fee to keep their buildings.) Under such a scenario, traditionalists are afraid that they would eventually be forced out of the church by the centrist/progressive conference leadership, so that the conference could keep the congregation’s building and assets to support the conference’s dwindling finances.

Some proponents of regionalization maintain that, while the U.S. church would change its stance on marriage and ordination, it would continue to welcome traditionalists to remain in the church. However, such hospitality could not be guaranteed. The Episcopal Church in the U.S. started out welcoming traditionalists to remain in that church after it changed its teachings, but now it appears that all parts of the church are expected to allow same-sex marriage and ordination of practicing LGBT persons, and its last traditionalist bishop has just resigned. If affirming same-sex relationships is truly a justice issue, which is how most centrists and progressives see it, they could not allow what they view as “discrimination” to continue indefinitely. Sooner or later, they would have to require same-sex marriage and ordination in all parts of the U.S. church.

The regionalization plans, whether it is the Christmas Covenant or the Connectional Table Plan, should not be seen as a substitute for separation. Amicable separation is the only pathway that would truly end the church’s conflict and allow freedom of conscience on the part of all clergy and congregations, whether centrist, progressive, or traditionalist. General Conference delegates should defeat any attempt to enact regionalization without also enacting the Protocol for Separation.