Divinity Mixed with the Human Mess 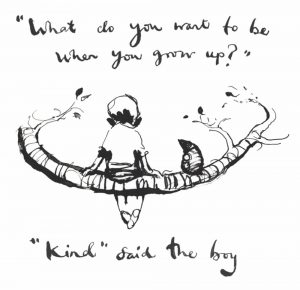 Illustration from Charlie Mackesy’s The Boy, the Mole, the Fox, and the Horse (HarperOne).

I spent a rainy January morning weeping into the pages of a children’s book. It’s called The Boy, the Mole, the Fox, and the Horse.

Though simple on the surface, the drawings and uplifting sayings from the pen of Charlie Mackesy struck me profoundly. After I read the last page, I rushed quickly to Instagram to find more of his beautiful artwork. As I scrolled through his feed looking for a favorite to use as a new desktop background, I realized how much of an exercise in futility such a mission would be. Every image filled my cup. Often in ways I didn’t realize I needed.

Through the questions of the main character – simply called “the boy” – and the answers of the mole, fox, and horse, Mackesy provides rich insight into the world and deep comfort and encouragement to his readers.

“It’s surprising that I’ve made a book,” writes Mackesy in his introduction, “because I’m so bad at reading them. The truth is I need pictures. They are like islands, places to get to in a sea of words.”

Born in Northumberland, England, Mackesy started drawing when he was nineteen after the death of his best friend. While a deep need to discover purpose had always driven him to figure out why we are all here in the first place, this event served as an unavoidable tipping point. He sat on the pavement and drew, drew “obsessively,” for years in order to try and “make sense of existence.”

The answer, he says, lay behind him, in a lyric from David Bowie’s “Major Tom,” a song he and his best friend once sang long and loud even as atheists. “… may God’s love be with you.” They would scream it, Mackesy says, because it felt really good.

It took a long time and a lot of drawing for him to be able to see this as the answer. Science only told him how, he says, but never why, his atheism boiled it all down to genes, and religion gave him nothing more than a set of rules. None of these things met him in his sorrow and confusion.

Then, in a fragile state after the loss of his friend, he saw a statement that stopped him in his tracks. While waiting for the tube in London, he encountered a huge poster with the phrase, “Cast your burdens onto Jesus because he loves you.”

Though he had no desire to become religious, Mackesy says he read the phrase over and over, questioned and questioned, and dug and dug. And finally, after much wrestling, he realized the answer to “why” is Jesus. That no matter what choices we make, we are unconditionally loved by him. Ultimately, Mackesy concluded, this is freedom.

The reality of Christ’s love solidified and took shape for Mackesy when he finally visited church and met Nicky Gumble, the well-known rector of Holy Trinity Brompton church in London. Gumble immediately invited him to Alpha, an eleven week course that seeks to create a space where individuals can participate in a conversation about faith, life, and God. This served as the perfect place for Mackesy to continue to work out the answer to his ever-present question “why?”

As we go to press, Mackesy has sold has 1.4 million copies of his book and it has been translated into 17 languages.

His “obsessive drawing,” Mackesy says, reflects Bowie’s own searching for his “tenuous connection with God.” You can see this messy, honest journey splattered across the pages of The Boy, the Mole, the Fox and the Horse in a kind of shabby glory. Each soft pen stroke portrays in its own way what Mackesy describes as “divinity mixed with the human mess.” 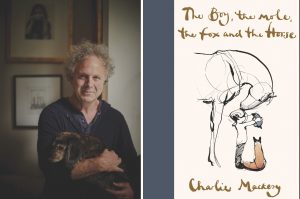 Perhaps it is this very untidy authenticity that accounts for the success of Mackesy’s book. What started a simple Instagram campaign to support National Health Service (NHS) medical workers exploded into a world-wide phenomenon. An editor at Ebury Press approached Mackesy when he hit 30,000 followers on the platform, asking if he’d be interested in putting the drawings together in a book.

Within a few months of its October 2019 release, it became a Christmas bestseller and went on to spend 55 weeks in the Sunday Times Bestsellers list top ten. More than that, his art has moved in the hearts of the worn out and weary.

Nurses under pressure reported to him that they’ve used his drawings to find a little peace amidst the 2020 chaos, PTSD units and clinics have utilized them for their patients, and thousands of individuals have printed off copies for themselves as their own little islands of peace in a trying time.

“These characters aren’t telling people what to do, because they’re talking to each other,” says Mackesy. “We’re just listening in, if you like, on the boy’s questions and their answers and vice versa.”

This overheard conversation invites the reader to vulnerability because the boy asks about that which we’re afraid to speak out loud. His longings and ponderings are our longings and ponderings. Like any good protagonist, he serves as an avatar for the audience, allowing us to learn along with him as he goes along on his journey.

This is the heart of Mackesy’s artwork. To provide a space for his readers to be open about what they’re feeling, and to be exactly who God created us to be. “No one is ordinary,” Mackesy said in an interview for GQ. “Everyone is unique. And love doesn’t require you to be anything other than who you are.”