Distinctions, Differences, and a Methodist Future 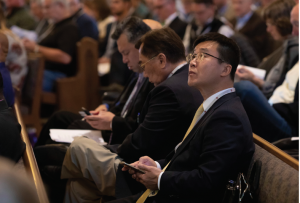 What will the proposed new Global Methodist Church look like? How will it operate? In what ways will it be different from what we have been accustomed to in The United Methodist Church?

These questions weigh on the minds of people who are thinking about the option of aligning with the GM Church after the UM Church’s 2022 General Conference adopts the Protocol for Reconciliation and Grace through Separation.

Change is difficult. We tend to prefer sticking with what we are used to. Of course, the whole reason for forming the GM Church is because we believe there are some crucial changes needed in how the UM Church currently operates.

Forming a new denomination essentially from scratch is a difficult and complex undertaking. Most United Methodists have never read the Book of Discipline, and they trust their pastor, district superintendent, and bishop to know how the church is supposed to run. Therefore, comparing provisions in the UM Church’s 800-page Book of Discipline with the GM Church’s much shorter Transitional Book of Doctrines and Discipline would be a tedious task for most United Methodists.

That is why we have undertaken to produce a comprehensive comparison chart (it has been posted on the Wesleyan Covenant Association website as a pdf – wesleyancovenant.org). It summarizes the main provisions of the UM Book of Discipline, the Global Methodist Church’s Transitional Doctrines and Discipline, and the proposals from the Wesleyan Covenant Association’s draft Book of Doctrines and Discipline. The chart shows how most of the important provisions of church governance are handled in the UM Church compared with how they would be handled in the GM Church.

It is important to keep the three documents clear in our understanding. The Book of Discipline governs how United Methodist conferences and congregations function today. It was adopted by the 2016 General Conference (with a few revisions in 2019) and is the result of an evolutionary process extending back to the very first Discipline in 1808. We do not know what the UM Church’s Book of Discipline will look like after the realignment contemplated by the Protocol is accomplished, but we know that significant changes to the church’s moral teachings have been proposed.

The Transitional Book of Doctrines and Discipline will govern how the GM Church functions from its inception until its convening General Conference meets (an approximately one- to two-year period). It borrows some features from the UM Discipline and some ideas from the WCA’s draft Book of Doctrines and Discipline. It was drafted by a three-person writing team and then amended and approved by the Transitional Leadership Council, which is the governing body for the GM Church from now through the transition until the convening General Conference.

The Transitional Book of Doctrines and Discipline fleshes out in greater detail than the WCA draft book some of the critical elements necessary to have the denomination running. It elaborates transitional provisions that would help individuals, clergy, congregations, and conferences move into the GM Church. However, anything that was not necessary for the transitional period – such as the manner of selecting and appointing bishops – has been left for the convening General Conference to decide.

In order to minimize the amount of change that congregations would experience during the transitional period, the Transitional Leadership Council sought to maintain continuity with the current UM Discipline where it made sense – such as in the appointment process for clergy to churches (although enhanced consultation with congregations will be required). At the same time, some critically important reforms – such as shortening the timeline for candidacy to ordained ministry – were incorporated in the Transitional Book of Doctrines and Discipline as essential elements of the new church and features that would set the direction of the denomination.

Four of the issues on the Comparison Chart regarding Methodism’s future found on the Wesleyan Covenant Association website.

Ultimately, the GM Church’s convening General Conference, composed of delegates elected globally from among those who align with the new church, will have the authority to formally adopt a new, more permanent Book of Doctrines and Discipline. It will undoubtedly build as a starting point upon the Transitional Book of Doctrines and Discipline. The WCA’s recommendations and other ideas laity and clergy wish to propose will be considered and potentially adopted by the General Conference. Notably, WCA recommendations not in the transitional book would not take effect unless adopted by the convening General Conference. However, they are an important indicator of the current thinking of denominational leaders.

The comparison chart is meant to be an easy way to compare how the GM Church will function during the transition and give an indication of some of the directions envisioned for its future. The chart may be reproduced and shared freely. Questions and feedback are welcome and can be sent to info @ globalmethodist.org.

Some highlights from the chart, specifically referring to the GM Church’s transitional period:

• Doctrine – The doctrinal standards will stay the same, with the addition of the Apostles’ and Nicene Creeds, and bishops and clergy will be expected to promote and defend the doctrines of the church.

• Social Issues – The Transitional church will be governed by a two-page statement of basic social witness in the Transitional Book of Doctrines and Discipline, compared with over 930 pages in the UM Discipline and Book of Resolutions. That statement would be binding on clergy and congregations. No changes or additions to this statement will take place before the inaugural General Conference of the new denomination. That General Conference will determine whether and how to write an expanded statement of social principles.

• Local Church Disaffiliation – Would allow for involuntary disaffiliation if necessary for churches teaching doctrines or engaging in practices contrary to the GM Book of Doctrines and Discipline. Voluntary disaffiliation possible by majority vote of the congregation. No payments required, except pension liabilities where applicable, secured by a lien on the property.

• Certified Laity in Ministry – Combines all types into one category called certified lay ministers, who can specialize to serve in any of the previous areas (e.g., lay speakers, lay servants, deaconesses, etc.).

• Orders of Ministry – Order of deacon contains both permanent deacons and those going on to elder’s orders.

• Licensed Local Pastors (non-ordained) – Grandfathered in, but transitioned to ordained Deacon or Elder.

• Retirement for Bishops and Clergy – No mandatory retirement, clergy may choose senior status. Senior clergy not under appointment are annual conference members with voice and vote for seven years. Thereafter, members with voice only.

• Election and Assignment of Bishops – Election process to be determined. Term limits envisioned, perhaps twelve years. Current UM bishops who join the GM Church will continue to serve. Annual conferences without a bishop would have a president pro tempore assigned for the transitional period.

• Appointment Process – Same as UM Church, with enhanced consultation with clergy and local church. Bishops must give a written rationale for appointing a pastor against the wishes of the congregation. Current appointments maintained where possible during transition.

• Guaranteed Appointment – No guaranteed appointment. Bishop must give written rationale for not appointing a clergyperson.

• Jurisdictions or Central Conferences – Optional, may or may not be formed in a particular area.

• Adaptability of the Discipline – Provisions of the Book of Doctrines and Discipline would apply equally to all geographic areas of the church unless specified. This implies provisions will be more general and consider the global context before being adopted.

• Annual Conference Agencies – Six agencies required, with additional ones at the discretion of the annual conference (compared with 25+ in the UM Church).

• Clergy Accountability – Similar to the UM Church complaint process, with stricter timelines and less discretion in dismissing complaints. Laity would be voting members of committee on investigation.

Many more details, as well as the WCA’s proposals following the transitional period, can be found in the chart found at wesleyancovenant.org.

My wife is a marriage and family therapist. One of her favorite questions to provoke dialog is, “How are things changing and how are they remaining the same?” That question is a fitting one to ask, as we head into a key few years of decision-making ahead. Hopefully, this chart can help provide some of the answers.