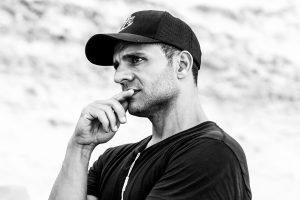 Pete Shilaimon is the producer of the new movie Forever My Girl. He was born and raised in Baghdad and escaped Iraq with his family to avoid religious persecution. Photo by Rosie Collins, courtesy of Catholic News Service.

“God created human beings; he created them godlike, reflecting God’s nature. He created them male and female. God blessed them: ‘Prosper! Reproduce! Fill Earth! Take charge! Be responsible for fish in the sea and birds in the air, for every living thing that moves on the face of Earth.’” – Genesis 1:26-28 (MSG)

At the beginning of the world, the God of the universe made humanity in his own image. He stamped his likeness on us so we might reflect him more than any of his other creations. Each one of us reveals his character in unique and special ways. “I was merely thinking God’s thoughts after him,” observed Johannes Kepler (1571-1630), the great scientist, astrologer, and mathematician. “Since we astronomers are priests of the highest God in regard to the book of nature, it benefits us to be thoughtful, not of the glory of our minds, but rather, above all else, of the glory of God.”

Some of our brothers and sisters see divine interaction through reason and logic. Others see it through God’s creative nature. These minds produce art, music, drama, poetry.

As Christ followers, our art should be the best art. After all, when we create we are walking in our father’s footsteps after him. Unfortunately, so much modern Christian art – movies, music, books – comes across as cheesy at best and lazily done at worst. When a faith piece is executed well, audiences sit up and take notice. These are the kinds of movies Pete Shilaimon strives to produce.

Shilaimon’s road to Hollywood was a winding one. Raised in Iraq, his family fled to Greece when the war with Iran broke out. As refugees, the family looked to his mother for guidance and wisdom, a practice Shilaimon keeps to this day. “Faith is big for my family,” he says. “It’s played a very key role in my life and my decisions. Pretty much every decision I have a conversation with my higher power, Christ, and I talk to my mom.”

For college, Shilaimon attended the University of California, Irvine. There he majored in theater and eventually moved to Los Angeles. For a few years, however, he drifted away from the film industry. Wanting to help people get in shape, he opened a gym and Pilates studio in Beverly Hills. Countless producers and actors came to him for health and wellness. Eventually, one of his clients encouraged him to become a producer himself and asked Shilaimon to go to Atlanta to work on the film The Grey. Shilaimon has gone on to produce such movies as Risen, The Zookeeper’s Wife, and Jackie.

Throughout his career, he has striven to make quality faith-based movies. Shilaimon believes it is a slap in the face to such stories if they are cheesy or their production value is a mess. This is why he seeks to make films that are accessible to everyone, not just an audience who will go see anything with a message about God. In Risen, he focuses the story on Clavius, a Roman soldier who is faced with doubts about everything he has believed in while searching for the body of Christ.

“If you really think about Risen, that movie was so spectacular because we’ve all been in Clavius’ shoes where we questioned our faith, or questioned our journey,” Shilaimon says. “We cheat ourselves when we just make faith based films for just the faith base. I think it’s a disservice for the faith base to be honest.”

It is honesty and vulnerability that make a film resonate rather than reverberate. Themes of doubt, of questioning, ofinsecurity, and forgiveness reach a wider audience because they are relatable. Forgiveness is the theme of Shilaimon’s newest project, Forever My Girl. Based on a book by Heidi McLaughlin about how people mess up over and over, this film portrays a beautiful picture of confession and forgiveness.

In Forever My Girl, a country music star named Liam Page goes back to his hometown for the funeral of his best friend from high school. There, he faces the consequences of leaving his bride Josie at the altar to chase after fame and fortune.

Though the main plot centers around a romantic relationship the story deals with familial relationships as well. “It was such a relational story that I thought there was something beautiful and magical there,” Shilaimon said. “The dad is a preacher. And that angle was really sweet because he’s going on and on about forgiveness and how we as human beings really need to love and forgive each other. And how we need to pick people up and not throw them down. So it resonated with me because it’s what my mom teaches my brothers and my sister and myself.”

Written and directed by Bethany Ashton Wolf, Forever My Girl is the fourth female director LD Entertainment has utilized in two years. As a production company, Shilaimon said it believes very strongly in empowering women to direct, giving them equal pay, and providing equal opportunities.

“We need to treat women in Hollywood the same way we treat our men,” Shilaimon says. “Four female directors in two years is unheard of. Women are just as talented as men. We were hiring them before it was cool.”

Belief drives the art Shilaimon makes. There are some movies he has produced that merely make it possible to create the ones he’s passionate about, and there are some movies he made years ago he would not make today. Realizing this is simply a matter of growing up, he says. Now, Shilaimon has more freedom to create the stories he is passionate about.

“My company believes in all the films we make,” he says. “Some are commercial, some we make from pure, pure love because we love the subject matter.”