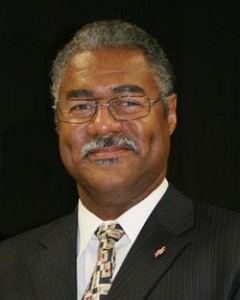 A group of seventeen clergy and laity in the Iowa Annual Conference have filed a complaint against Bishop Julius Trimble of the Indiana Episcopal Area.

In a letter addressed to Bishop Gregory Palmer, president of the North Central Jurisdiction College of Bishops, the group said, “With reluctance, we write to lodge a formal complaint against Bishop Julius Trimble, Indiana Area, for the following chargeable offense: ‘Disobedience to the order and discipline of The United Methodist Church.’ In addition, we believe Bishop Trimble has exhibited an unwillingness to do the work of ministry, entailed in the office of bishop.”

The complaint stems from Trimbles’ decision to dismiss a complaint filed against the Rev. Anna Blaedel while he was still serving the Iowa Episcopal Area earlier this year. At the 2016 Iowa Annual Conference Blaedel requested a point of privilege to announce to the gathered assembly, “I am a ‘self-avowed practicing homosexual.’ Or, in my language,” she continued, “I am out, queer, partnered clergy.”

As intended, Blaedel’s very public announcement stirred controversy and debate throughout the connection and elicited a complaint against her. Pastors, particularly in Iowa, found themselves fielding questions and comments from concerned laity about her provocative announcement and wanting to know how the bishop would respond to such a blatant admission of defiance. Trimble, without public comment, dismissed the complaint on his second to last day as bishop of the Iowa Episcopal Area, offering no explanation for his quiet, eleventh hour decision.

“We were disappointed in the way Trimble handled the complaint,” said Chris Downey, a lay member in the conference and one of the complainants. “If he thought Blaedel’s admission was in defiance of the Discipline, then he should’ve proceeded accordingly. If he did not, he should’ve had the courage of his convictions. He should’ve openly told the people of the Iowa Annual Conference why he had no intention of holding Blaedel accountable to her ordination vows.”

Clergy and laity in the Indiana Annual Conference who have become aware of Trimble’s dismissal of the complaint have also expressed dismay with his decision.

“I understand that being a bishop can be a challenge at times, but no one forces a clergy member to assume the role, they freely accept it, and of course most quietly campaign for it,” said Rev. Riley Case, a retired clergy member of the Indiana Annual Conference and a well respected commentator and historian. “However, once you assume the job you ought to be willing to carry out the duties accordingly, or at least explain why you don’t intend to carry out some of them.”

The complaint against Trimble will be handled by select members of the North Central Jurisdiction’s Episcopal Committee in what is known as a supervisory process. It will bring together those who filed the complaint and the “respondent” (Bishop Trimble in this case) in an effort to reach a just resolution that would avoid the necessity of a church trial.

Many do not think much will come of the complaint because the jurisdictional colleges of bishops are loathe to hold one another accountable regarding cases having to do with the church’s sexual ethics and its teachings on marriage. Retired Bishop Melvin Talbert has presided at two same-sex weddings in the last three years and he has experienced no adverse consequences for doing so.

It is also evident that a number of the bishops in the North Central Jurisdiction are out of touch with rank-and-file United Methodists regarding these matters. Many United Methodists believe the church’s teachings on marriage and the practice of homosexuality are grounded in Scripture, tradition, reason, and experience, and therefore are where the church should be on these matters. However, it is increasingly apparent that some bishops reject the will of the General Conference and have no intention of fulfilling their responsibility to hold clergy accountable to the Book of Discipline.

Some laity and clergy believe the failure of certain bishops to act in these cases lacks integrity and is condescending. Increasingly, concerned laity are responding by instructing their local church treasurers to keep all their tithes and gifts in the local church rather than forwarding a portion of them to the annual conferences. Some local churches have also decided to withhold or escrow their apportionments until bishops begin fulfilling their duties to maintain the good order and discipline of the church.

And at this stage, no one knows for sure how many United Methodists are quietly withholding gifts and tithes, and what effect it is having on local churches’ ability to pay 100 percent of their apportionments. But if mainline denominations that have liberalized their teachings on marriage and ordination are any indication, the UM Church is likely to see giving slow or drop off in 2016 and 2017.

It is regrettable that it has come to this, but United Methodists who support the church’s polity and teachings have come to the conclusion that their episcopal leaders are dismissive of their concerns and that some bishops clearly believe their own opinions should supersede the will of the General Conference and the Book of Discipline.