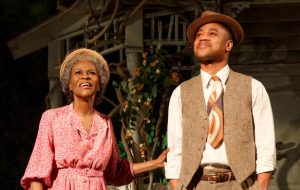 In 2014, the legendary Cicely Tyson is joined on stage by Cuba Gooding Jr. for “The Trip to Bountiful” on Broadway.

Internationally-known for her six decades on stage and screen, award-winning actress Cicely Tyson died on Thursday at the age of 96.

“I come from lowly status. I grew up in an area that was called the slums at the time,” Tyson said while receiving an honorary Oscar award at age 94. “I still cannot imagine that I have met with presidents, kings, queens. How did I get here? I marvel at it.”

The revered actress knows that her fame is due to her superb dramatic roles over the years. “Yet I am also the church girl who once rarely spoke a word,” Tyson writes in her autobiography, Just As I Am, published shortly before her death. “I am the teenager who sought solace in the verses of the old hymn for which this book is named. I am a daughter and mother, a sister and a friend. I am an observer of human nature and the dreamer of audacious dreams. I am a woman who has hurt as immeasurably as I have loved, a child of God divinely guided by His hand.”

At the age of 93, she gave a message to her home congregation of Abyssinian Baptist Church in Harlem about her childhood. “We were in church from Sunday morning to Saturday night,” she said to laughter in the sanctuary.  “On Sunday, I played the organ. I taught Sunday school. We had evening service. Monday, we had young people’s meeting. Tuesday, old people’s meeting. Wednesday, we gathered together to try to introduce young children to the ways of God. Thursday, we had club meeting. Friday, I sang and rehearsed the choir. And Saturday, we cleaned the church.

“I decided at one point that if I ever lived to became a woman, I would never enter the portals of a church again,” she said jokingly – once again, to sustained laughter.

In 2013, Tyson won a Tony award for her portrayal of Mrs. Carrie Watts in the Broadway revival of Horton Foote’s “The Trip to Bountiful.” One notable part of Tyson’s performance triggered a newsworthy audience reaction. Out of character for a Broadway audience, those in the theater sang the classic hymn “Blessed Assurance” as Tyson sang it during an emotional section of the second act.

“From the first note, there’s a palpable stirring among many of the black patrons in the audience, which the play, with its mostly black cast, draws in large numbers,” reported The New York Times. “When Ms. Tyson jumps to her feet, spreads her arms and picks up the volume, they start singing along. On some nights it’s a muted accompaniment. On other nights, and especially at Sunday matinees, it’s a full-throated chorus that rocks the theater.”

Once Tyson discovered that the audience was singing along, she found it thrilling. “Thrilling but unexpected,” the Times points out. “Under normal circumstances the Broadway experience does not include audience participation, even when catchy songs from classic musicals are being performed. The ‘Blessed Assurance’ phenomenon is peculiar, perhaps even unheard-of, but the hymn itself is something out of the ordinary,” the Times admits.

The hymn was written in 1873 years ago by Fanny Crosby and Phoebe Knapp, both members of John Street Methodist Episcopal Church in Manhattan – merely five miles down the road from where Tyson performed her role on Broadway.

Some audience members interviewed by the Times seemed startled that someone might not be familiar with the hymn. “A lot of people in the audience grew up with that song,” said Michelle Crawford, who learned it while attending the Thessalonia Baptist Church in the Bronx as a child. “Nobody had to put the words out there in front of anybody. They knew that song.”

The audience singalong struck many in the audience as unremarkable. “I chimed in,” said Pinkey Headley, who sings the hymn at her Methodist church in Brooklyn. “It’s the natural thing to do.”

Denise Wells agreed. She attends Mount Zion Baptist Church in Jamaica, Queens. “It’s an old Sunday song,” she told the reporter. She then put her hand over her “heart and began declaiming the hymn’s opening verse, nodding emphatically after each line: ‘Blessed assurance, Jesus is mine! O what a foretaste of glory divine!’”

While the audience reaction was a surprise to Tyson, the song was not new to her. “It was one of my mother’s favorites,” she reported. “I don’t remember any Sunday, when she was in the kitchen making family dinner, when she wasn’t singing a hymn.” The song is so meaningful to the memory of her mother that Tyson endowed a pew at the Abyssinian Baptist Church that has a plaque reading: “To Mother – Blessed Assurance.”

In Just As I Am, Tyson wrote about her eventual death. “I don’t know when my day is coming. None of us does. Which is why, as soon as my lids slide open each morning, I say thank you. Thank you, Father, for the gift of another day. Thank you for just one more breath. Thank you for the sacred opportunity to live this life.”

“The way I see it, God isn’t finished with me. And when I’ve completed my job, he’ll take me. Until then, I’ve got plenty to do,” Tyson wrote.