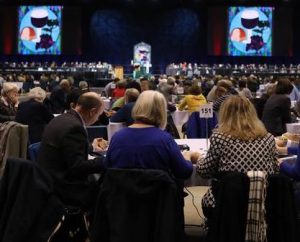 As we approach a possible separation in The United Methodist Church this year, one of the important questions to answer is, “Why should we separate?” There are many reasons for the conflict in our church that have led us to this point. Rob Renfroe and Walter Fenton explored many of these issues in their book, Are We Better Together?

The fact remains that there is a certain inertia about staying in a church that has been one’s environment for years, and for many, a lifetime. There is the cry of the conflict avoider, “Can’t we all just get along?” Can we not simply overlook our differences and keep doing what we have been doing?

Due to the pandemic, our churches and leaders have been focused on the critical adaptations to ministry that it required. Theological and practical differences have been set aside in this “emergency” time. It is therefore easy to think that we can just keep muddling along as we have been, ignoring our differences. However, once the “emergency” eases off and life and ministry return to a more normal rhythm, the differences resurface. Several annual conferences experienced that even during this season of virtual conference sessions. The underlying differences in our church are not going away, so the reasons for separation are not disappearing, either.

The differences between the “sides” in this intra-church conflict are so deep and so entrenched that staying together has become unthinkable for many. The increasing trickle of departing congregations and individual members testifies to the growing sense that we are a church that is coming apart. But why?

Many assume that the disagreement over the definition of marriage (does it include same-sex marriage) and ordination standards (do we ordain practicing LGBT persons into ministry) is the primary reason for separation. But these are just the presenting issue for a much deeper divide in the church. That divide is reflected in both substantive disagreements affecting core beliefs and practical abandonment of core church processes.

Traditionalists and evangelicals within United Methodism have always made it clear that the disagreement is about Scripture and the source(s) of our denominational beliefs and teachings. The traditional side focuses on the primacy of Scripture to establish our church’s beliefs and teachings. The tradition of the church plays a role in setting the boundaries for interpreting Scripture. Such interpretation is informed by one’s personal experience of God and life, as well as the best historical, linguistic, and archaeological scholarship. We use reason to make those interpretations rationally coherent. But the source of our beliefs is the clear teaching of Scripture.

Many centrists and progressives, by contrast, continue to operate by what they were taught was the “Wesleyan Quadrilateral” approach to Scripture. This approach sees the tradition of the church and particularly contemporary knowledge (their definition of experience) and the application of human reason to be equal with Scripture as sources of our beliefs.

It should be noted that this is not the approach that John Wesley had to Scripture. This was a modern-day construct developed by Dr. Albert C. Outler, a well-known Wesleyan scholar. “The term ‘quadrilateral’ does not occur in the Wesley corpus – and more than once, I have regretted having coined it for contemporary use, since it has been so widely misconstrued,” Outler confessed.

This willingness to abandon (by some) or reinterpret the teaching of Scripture to match current societal understandings manifests in the issues regarding marriage and same-sex ordination standards. But it also holds the potential for any number of other accommodations to cultural assumptions.

Traditionalists believe the old adage still holds true: “Whoever marries the spirit of this age is destined to be a widow in the next.” It is too easy to adapt our beliefs to whatever fits our society, deluding ourselves into thinking that we are being faithful to Christ. Jesus said, “Not everyone who says to me, ‘Lord, Lord,’ will enter the kingdom of heaven, but only the one who does the will of my Father who is in heaven” (Matthew 7:21).

These two ways of arriving at our church’s beliefs and teachings are incompatible with each other and will always engender conflict. (Traditionalists are not immune from interpreting Scripture in ways that adapt to the prevailing views of a particular time and place. But having Scripture as ultimate authority offers a built-in mechanism to correct such accommodationism.)

A second foundational difference between the “sides” in this conflict relates to how we define ourselves and determine what is right. Most centrists and progressives value self-determination as the deciding factor in one’s view of oneself. This is connected to the postmodern idea that there is no such thing as absolute truth, but truth is defined by each person for themselves. My “truth” can be different from your “truth,” and we are obliged to respect and affirm whatever is another person’s “truth.”

This concept again plays out in our culture’s ongoing sexuality debate, where a person’s attractions, desires, or sense of self are supreme in defining who that person is. According to the centrist/progressive dogma, no one can question how another person defines themselves or their stated identity.

Furthermore, it is assumed that what “is” is what “ought” to be. The fact that a person defines themselves a certain way means that is God’s will for them. God created them the way they perceive themselves.

Traditionalists disagree. We would point to the pervasive effects of the Fall and the catastrophic impact of sin, both on human experience and human perception. “The heart is deceitful above all things and beyond cure. Who can understand it?” (Jeremiah 17:9). What “is” might be that way because of the sin and brokenness of this world, not because it is God’s will for it to be so. What “ought” to be is what God reveals to us in his Word, through the life of Jesus and the teachings of Scripture. We are not who we think we are, but who God says we are. He is the one who can “search the heart and examine the mind” (Jeremiah 17:10), who knows us better than we know ourselves. Most importantly, it is he who created each one of us and knows what we are meant to be.

Traditionalists believe there is absolute truth that is valid for all people in all times and all places. That truth is revealed to us by God. God is unchanging and his truth is unchanging. What he reveals about himself and about us today is going to be consistent with what he has revealed in the past. We do not get to change the truth when it becomes convenient to do so.

These different understandings of truth will inevitably lead to endless conflicts between what God has revealed as truth and whatever new “truths” people want to adopt for themselves.

The centrist/progressive agenda is an unapologetic social-justice agenda. Promoting “inclusion” has become the highest value of official United Methodism. The left wing of the church appears to believe that the church’s main purpose is to “transform the world,” often through political action in line with liberal political causes, such as abortion rights, unlimited immigration, and advocating for the Palestinians against Israel.

For traditionalists, the transformation of the world is a consequence of making disciples of Jesus Christ, not the primary goal of the church. As people’s lives are transformed in discipleship, the world is changed. Traditionalists do care about social justice and often work concretely to alleviate poverty, fight racism and sexism, and provide ways for people to overcome adversity. In advocating for social justice, however, we think the church should not always espouse one set of political solutions to addressing society’s ills, but listen to all perspectives.

Furthermore, the strident advocacy of liberal political causes that at times violate our understanding of Scripture has alienated traditionalists, as has the equating of discipleship with promotion of the latest political idea. The church is not built on politics, but on Jesus Christ, and on our worship of and discipleship to him.

These competing agendas pull the church in opposite directions. We cannot walk together if we disagree on the destination.

Breakdown of the Church’s Governance

The differences in the church have become so extreme and strident that the church’s governance has broken down. Since 2011, the church’s rules about marriage and ordination standards have been routinely and increasingly ignored by those who disagree with them. Some bishops have refused to enforce requirements of the Discipline with which they disagree. Under our current Discipline, there is no way to hold such bishops accountable or ensure compliance.

The General Conference is the one body that speaks for all United Methodists and has the power to determine the church’s laws. Yet, following the 2019 General Conference, more than 20 U.S. annual conferences passed resolutions repudiating the actions of General Conference, and leading pastors and laity took out full-page ads in newspapers apologizing for those decisions. A number of annual conferences in 2019-20 openly violated the church’s standards by ordaining self-avowed practicing homosexuals as clergy. This disregard for the church’s rules has spread to other aspects of the church’s life, including the unlawful suspension and removal of clergy (Here) and (Here) without due process and the closing of viable congregations possibly in order to seize their assets.

When significant portions of the church refuse to abide by that church’s governance processes, the church’s unity is no longer viable. Ordained clergy vow to abide by the church’s tenets, even when we disagree, but many now are renouncing that vow by their actions and words. In a troubled marriage, sometimes divorce recognizes the fact that the marriage has already ended. In our church, formal separation would simply recognize the fact that our church has already irrevocably divided.

Some would urge traditionalists to continue to fight for what we believe is right within The United Methodist Church. We must ask, however, is this the best use of the time, energy, and resources God has given us? While we continue the fight, the church declines faster and faster. Separation would allow us to refocus on evangelism, making disciples of Jesus Christ, and strengthening the church’s life and witness.

No, The United Methodist Church is already irretrievably broken. Regrettably, the differences in how we decide what our beliefs are, how we perceive the truth, what our agenda for the church is, and our willingness to abide by the normal processes of the church are so deep that they cannot be bridged or papered over. The least harmful way forward is to recognize those differences and provide a fair and equitable avenue for different parts of the church to go their separate ways, pursuing what they believe to be God’s direction. It will not be easy or painless, but it will end the harm that is currently being inflicted on so many in the church due to this struggle. Relieved of the burden of conflict, perhaps all parts of the church can once again thrive and grow.