Can the Bishop’s Special Commission Find a Way Forward?

Earlier this week the Council of Bishops of The United Methodist Church announced the 32 people who will serve on its Special Commission on a Way Forward. Eleven laity, 11 elders, eight bishops, and two deacons were selected. Three additional bishops will serve as moderators. (Our friends at United Methodist News Service have helpfully listed the commission members HERE.)

The bishops, at the May 2016 General Conference in Portland, Oregon, proposed the creation of the special commission, and it was approved by the conference’s delegates. The commission is charged with perhaps the most challenging task given to a body since the formation of the UM Church in 1968. Its mandate includes “a complete examination and possible revision of every paragraph in our Book of Discipline regarding human sexuality,” and finding some way to maintain church unity despite deep differences regarding the church’s sexual ethics, its teachings on marriage, and increasingly, over its polity. 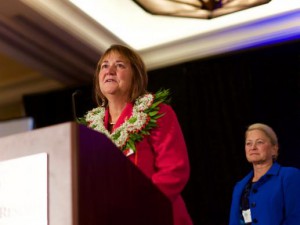 During the late spring and summer of this year, its work was made even more daunting by serial acts of ecclesial defiance regarding the church’s teachings and its ordination standards. Several annual conferences and two jurisdictions took actions in direct opposition to those reaffirmed by the General Conference. Chief among them was the Western Jurisdiction’s election of the Rev. Dr. Karen Oliveto as a bishop of the whole church. Oliveto, who now presides over the Mountain Sky Episcopal Area, is married to her female partner, who is a deaconess in the UM Church.

While people across the connection expressed their hopes and prayers for the newly appointed commission and its work, others offered mild to severe critiques of its composition.

“We feel erased and disappeared in the mission statement of the Commission,” wrote a group of more than 60 openly lesbian, gay, bisexual, transgender, queer or questioning United Methodist clergy and clergy candidates in a statement entitled, “United Methodist Queer Clergy Respond to Naming of Special Commission.” It noted that “only two self-identified LGBTQI persons” were selected as members, and protested that their “lives and the ministries entrusted to [them] will be on the agenda of a body whose make-up is unfairly hegemonic.” 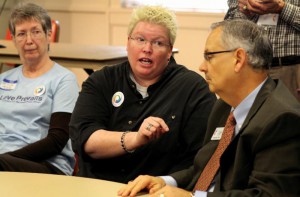 Love Prevails, a UM affiliated LGBTQ+ advocacy group, posted on its Facebook page that “the Commission is not representative of LGBTQ diversity, much less does it represent an LGBTQ majority,” something it pressed for earlier this summer. According to UMNS, the Rev. Amy DeLong, one of the organizations leaders, “found it ‘startling and unconscionable’ that there are no out lesbians or transgender individuals on the commission.”

Still others voiced support for the commission, but also had regrets. “It is problematic to include [caucus group] employees as voting members of the commission,” wrote the Rev. Jeremy Smith, a progressive blogger based in Portland, Oregon. “Their jobs are contingent on their caucus group boards, which is quite a collision of the role to discern a path forward that their boards may not approve of.”

We’re biased of course, but we’re delighted Lambrecht and Miller were included on the commission. And while we differ with Berryman on a number of issues, we are not troubled by his inclusion as well.

Lambrecht and Miller have earned the respect of leaders across the theological spectrum. They have participated in numerous roundtable discussions, spoken at annual conferences, and have always respectfully engaged with those who are in disagreement with the church’s polity, sexual ethics, and teachings on marriage. We are confident they will only enhance the work of the commission, and will act out of conscience and their affection for the church.

Along with Berryman, Lambrecht and Miller represent important and dedicated constituencies in the church. A failure to include knowledgeable representatives from each of these groups would have immediately imperiled the commission’s chances of bringing forward a plan that could gain the broad support necessary for a way forward.

The commission’s charge is not an enviable one, and no one will be surprised if it cannot reach consensus and present a viable plan for the church’s consideration. The hour is late, so they will have to work thoughtfully and deliberately in the months ahead, and therefore the members deserve our thoughts and prayers.

We are disappointed it took the Council of Bishops five months to appoint the commission. We fear valuable time for deliberation and crafting recommendations has been lost. Even more importantly – and particularly in light of all the defiance, the approval of so-called “just resolutions,” the quiet dismissals of valid complaints, and the provocative election of Oliveto – the bishops’ delay further eroded the trust rank-and-file United Methodists have in their leadership and the institution as a whole.

Most, if not all, of the proceedings at General Conference, projected an alarming sense of institutional paralysis, and a disheartening sense that the long and acrimonious debate over the church’s sexual ethics, now amplified by routine and flagrant acts of ecclesial defiance, will go on indefinitely.

In a church facing a major demographic crisis in the coming decade, it is now imperative that its bishops act swiftly and boldly to maintain the good order and integrity of the church. No one doubts their faithfulness, passion for the church, and commitment to building bridges to keep the church unified. However, as laudable as all those attributes are, the necessity of finding consensus around a definitive resolution, and the courage to lead is what they need most to exhibit in the coming months.