Many people were shocked, actually offended, when Dr. Ted Campbell told the World Methodist Conference, “The question at this point is not whether we divide or not. That, I fear, is a given now.” A United Methodist elder and noted history professor at Southern Methodist University’s Perkins School of Theology, Campbell told a large crowd gathered in Houston, Texas, on September 1, that it is unlikely that the denomination can hold together.

Such admissions are not usually made in public, especially by persons of Dr. Campbell’s stature. However, behind closed doors, others representing The United Methodist Church are making the same prediction. One bishop told me that coming out of the bishop’s commission, “There will be some kind of structural separation. I hope we can maintain some connection around our central mission of making disciples, but structural separation will be the end result.”

Another bishop was even more blunt in his remarks to me: “We may be able to maintain some kind of connection, but the structural separation that will occur as a result of the commission will be so different than where the church is today, that ten years ago it would have been referred to as schism.”

Several leading “centrist” pastors have come to the same conclusion. One put it simply, “I think separation is inevitable.” Another who had been a supporter of A Third Way was even more pointed in his remarks. “We all know we’re going to split. All this happy talk about staying together is just a bunch of nonsense.”

The election of the Rev. Karen Oliveto to the episcopacy has increased the likelihood that The United Methodist Church will not be able to remain in its present form.  Though our Book of Discipline states that self-avowed practicing homosexuals may not serve in ordained ministry, Oliveto is legally married to her long-time partner, another woman. Still, the Western Jurisdiction chose her to become one of our newest bishops.  This came on top of at least nine annual conferences and two jurisdictional conferences that have committed to not “conform or comply” with the parts of the Discipline they disagree with. This leaves many of our evangelical churches trying to maintain what Methodism has always been in parts of the country where the church has left them.

The response has been predictable. Some churches are withholding their apportionments and others have retained legal counsel to determine how they might leave the denomination. The election of the Rev. Gene Robinson as bishop by the Episcopal Church set in motion a chain of events that led many Episcopal congregations to eventually create a new denomination, the Anglican Church in North America.

I do not rejoice that we have arrived at this place. But I am hopeful that we are moving towards a new beginning.

I can see a new Methodist movement, either within the UM Church or, if it must be, outside of it.

It will be a movement that is not top down, but bottom up. One where boards and agencies actually serve the local church and are responsible to us.  One where we are organized like a missional force that wants to change the world, not like a bloated bureaucracy.

I can see a movement where we don’t argue over the authority of Scripture or what the Bible teaches about sexuality.  Where our seminaries prepare godly men and women to do ministry instead of being schools of religion where some faculty members don’t believe in our doctrines, and teach the latest theological fads that have no power to change the world and that will be forgotten within a generation.

It will be a movement that has freedom to plant evangelical churches on the coasts and in northern urban centers where people will still respond to the Gospel of Jesus Christ if it is presented by servant communities with grace and truth.

I can see a Wesleyan movement that cares about the rejected, the outcast, and the marginalized – cares about them enough both to minister to their physical needs and to tell them how their sins can be forgiven and their souls can be saved. 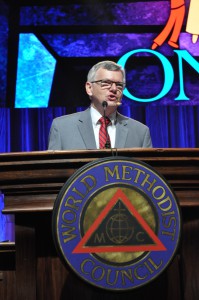 I can see a movement that you and I will be excited and proud to be a part of.

It will be a new Wesleyan expression for the 21st century. It will be filled with the power of God and the compassion of Christ that compels it into a lost world that needs Jesus.

There is a new day coming. And we are going to be a part of it. Those of you who are young will have decades to enjoy it and shape it and be blessed by it. Those of us who are older will one day before we die look back and say, “The Lord has done a new thing, and it was marvelous in our sight. And he was gracious enough to let us be a part of its beginning.”

Friends, my hope and my prayer is that we will walk into this new day together. This is no time to become discouraged or to grow weary. A better day is coming and it fills my heart with joy to think of us walking into it together for the glory of our Lord and Savior.