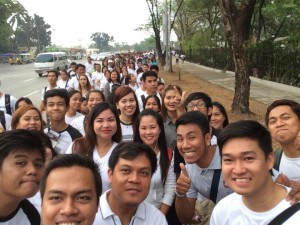 Students from Wesley Divinity Seminary, Wesleyan University, flash smiles and signs of affirmation during a march and rally in Quezon City, Philippines. Photo by SJ Earl Canlas and Jimuel Mari.

Over the last several weeks of Perspective, I have been surveying the growth and decline of United Methodism around the globe. The statistical report is available here. The big picture is that most of Methodism around the globe is in decline, with the exception of certain regions in Africa. In Part 1, I went into more detail about Africa. Two weeks ago, I surveyed the situation in the United States.

Rounding out our big picture look at the denomination, our attention turns to Europe and Asia. Observers of membership statistics will notice a dramatic dip in the Philippines from 216,300 in 2015 to 140,235 in 2016. That represents more than one-third drop in membership.

According to sources in the Philippines, the difference does not reflect a sudden one-year decline in membership but is due in part to more rigorous attention to accuracy that began several years ago (not solely due to the change in reporting requirements instituted by the 2016 General Conference).

As it stands, the current membership of United Methodism in The Philippines is roughly equivalent to the size of the Illinois Great Rivers Annual Conference or Upper New York or Alabama-West Florida.

Paradoxically, even with this loss of membership, the Philippines will gain delegates in the 2020 General Conference. They added a new annual conference for 2016 and another one in 2020, so they have gone from 48 delegates in 2012 to 52 in 2020. (Each of the 26 annual conferences is entitled to a minimum of two delegates to General Conference.) The Philippines has considered breaking off from The United Methodist Church in the past and becoming an autonomous Methodist church (similar to the Methodist churches in Mexico, Puerto Rico, and other parts of Latin America). Their future course of action will depend upon the outcome of the 2019 General Conference.

The most exciting development in Asia is the growth of mission work in Southeast Asia, currently under the supervision of the Bishop of Texas, Scott Jones. These areas have not yet formed into annual conferences, but are moving toward that point over the next several years. There are over 300 churches in Vietnam, 100 in Laos, and over 150 in Cambodia. They face obstacles in working with the government, hostility to foreigners, and in some cases even religious persecution. But these areas are growing, and most will seek to maintain a relationship with The United Methodist Church. 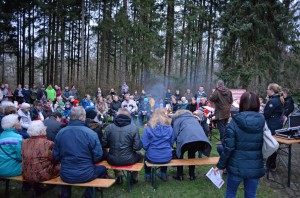 It is important to remember that the European and Central Asian annual conferences are subject to adverse political conditions, ranging from the armed conflict in Ukraine to religious repression in Russia and Muslim countries. The churches and conferences there are very fragile, and they are likely to be affected more severely by whatever course of action is adopted by the 2019 General Conference. They experience theological differences between more conservative areas and more liberal areas, but have been able to continue working together because of their small size and need for each other. This dynamic could change, depending upon the outcome of the 2019 General Conference.

All of the parts of the UM Church outside the U.S. are striving to become more financially self-supporting. Some parts of Europe and the Philippines have contributed to the global work of the church for many years. Other parts of Europe, Asia, and Africa are just beginning to make those contributions. Many have helped to support their own bishop and annual conference expenses, while not being fully self-sufficient. Their desire is to move in that direction, which led to the 2016 General Conference assigning apportionments to the churches outside the U.S. for the first time, based on a formula that takes into account economic conditions and membership.

The move toward self-support is not an attempt to marginalize United Methodists outside the U.S. (as I have heard some people worry). Instead, it is a desire to build their capacity, so that they can fully support the work of their churches and extend that work in their own countries and around the world.

One of the gifts for me to be a member of the Commission on a Way Forward has been to learn from members from other countries and to learn about their challenges and victories. The United Methodist Church is the only mainline Protestant denomination that is a truly global church, having members who serve equally from more than 50 countries in the world. I believe that can be a real strength of our church and help us to broaden our understanding of the Christian faith. Our brothers and sisters can teach us ways to grow our faith and our churches in an adverse environment (which many of them are experiencing). Awareness of our global Methodism can strengthen our church and give us a foretaste of heaven, where there will be “a great multitude that no one could count, from every nation, tribe, people, and language, standing before the throne and in front of the Lamb” (Revelation 7:9).

Thomas Lambrecht is a United Methodist clergyperson and the vice president of Good News. He is also a member of the Commission on a Way Forward.