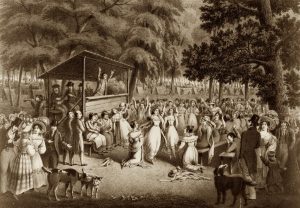 A lithograph, of unknown origin or date, illustrates a camp meeting popular in the early 1800s.

Methodism swept across the American frontier like an uncontrollable prairie fire. That is hardly how we would describe it today. There are great benefits in considering some of the things that led the decline of Methodism.

What lessons can we learn from the past so we don’t repeat them tomorrow?The first warning we can take from the Wesleyan revival is to observe what can happen to any movement over time. Sadly, some movements, as they become institutionalized, also grow more secular, losing the “evangelical” focus that gave them life in the first place. Many denominations that began as transformative movements eventually became institutionalized, leaving behind their original roots. If the cultural values and beliefs that initially helped the movement grow are not passed down to succeeding generations, this institutionalization will lead to the loss of the gospel focus and of disciple-making.

C.S. Lewis warned against this, saying, “There exists in every church something that sooner or later works against the very purpose for which it came into existence. So we must strive very hard, by the grace of God to keep the church focused on the mission that Christ originally gave it.” The cure for this secularization of the revival spirit, as Lewis suggests, is to develop habits and practices that keep us faithful to the original mission of the church: the call to preach the gospel and make disciples.

We see this pattern repeated throughout history. Many of the great revivals of the past began as Spirit-inspired disciple-making movements, yet over time they became secular institutions. For example, consider the history of the modern university.

Many colleges, including state universities in the United States, started out as Christian institutions to train young people for ministry and Christian service. Schools like Harvard (Puritan), William and Mary (Anglican), Yale (Congregational), and Princeton (Presbyterian) were created for Christian higher education.  The Great Awakening led to the founding of Princeton, Brown, Rutgers, and Dartmouth in the mid-eighteenth century, and to the single most prolific period of college founding in American history. Over time, however, the revival spirit that founded these institutions was lost, and most of these former Christian colleges and universities became secular universities with little or no religious affiliation.

Institutionalization. Methodism was one of the greatest and longest-lasting discipleship movements in the history of the church. Yet as Methodism continued to grow, Wesley noticed that the movement was following the patterns of institutionalization. He lamented that this was happening, and he felt that a grim fate might befall the Methodists if they ever lost their zeal.

“I am not afraid that the people called Methodists should ever cease to exist either in Europe or America,” Wesley wrote. “But I am afraid, lest they should only exist as a dead sect, having the form of religion without the power. And this undoubtedly will be the case, unless they hold fast the doctrine, spirit, and discipline with which they first set out.”

Sadly, this is exactly what happened to Methodism in the United States. Just one hundred years after the miraculous growth of the movement, there were warning signs of secularization. Today, the United Methodist Church, the descendant of the American Methodist movement, is in rapid decline and on the verge of splitting into factions. What caused this shift, making a large and growing denomination one of the fastest declining?

History teaches us that the church is susceptible to the secularizing tendencies of institutionalization whenever it loses focus on the message and mission of Christ. In The Convergent Church: Missional Worshipers in an Emerging Culture, Alvin Reid and Mark Liederbach observe, “When the church loses, forgets, or fails to emphasize the missional thrust of its purpose … it is a move away from a movement mentality toward what we would describe as institutionalism.”

Whenever movements are transformed into institutional churches, they will begin to reduce the tension they feel with respect to the surrounding culture. There is less emphasis placed on growth and multiplication, and this leads to a loss of growth and the start of a slow decline. This pattern has repeated over and over again throughout the history of the church. And while there are many sociological factors to consider, there are three primary reasons this secularization occurred in the Methodist movement, leading to its decline in North America.

Shift in Preaching. As Methodism became an established church in North America, there was a strong impulse to “keep up” with the more established churches and to become a respectable part of society. Though the movement had grown and multiplied through lay preachers and circuit riders, the days of the traveling preacher on horseback were now replaced by fancy pulpits and robes. According to Methodist historian William Warren Sweet,

“Clergy culture and learning were no longer a monopoly of the Congregationalists, the Presbyterians, and the Episcopalians. Education, refinement, and dignity now characterized the ministry and service of the Methodists.”

This resulted in a shift in the preaching. Clergy moved away from simple messages on sin and salvation to speak about science and politics. Gone were the days of the Methodist camp meeting. Early Methodist preachers had arisen from among the common people, speaking the language of the ordinary man. A generation later, pulpits were filled with clergy who geared their message to a more educated, socially conscious audience.

Over time the pioneering, counter-cultural spirit of the Methodist movement was domesticated.  With the rise of educated clergy and increased social status came a further shift away from the original emphasis on holiness and the “methods” of the class meeting. As sociologists Roger Finke and Rodney Stark note, “Their clergy were increasingly willing to condone the pleasures of this world and to de-emphasize sin, hellfire, and damnation; this lenience struck highly responsive cords in an increasingly affluent, influential, and privileged membership. This is, of course, the fundamental dynamic by which sects are transformed into churches, thereby losing the vigor and the high-octane faith that caused them to succeed in the first place.”

Focus on Buildings. One hundred years from its humble beginnings, Methodism in North America had finally arrived. Not only had the Methodists become the largest denomination in the land, they had moved up the social ladder of society and were beginning to attract people of wealth and privilege. They had shifted from meeting in simple, unadorned buildings to constructing large, expensive facilities that rivaled the nicest established church buildings in town. In 1911, a new building for a Methodist congregation in Illinois even began charging $200 for good seats at the church.

These new, fancy buildings were a visible sign that Methodism had moved away from the vision of its founder. Once an upstart sect, it had become one of the established religions of the young nation. Yet while some would see these as positive signs, they were the beginning of the end of the Methodist movement in North America.

Today, you can look at almost any town in North America and find an impressive Methodist church building from this era, yet sadly, most of these have closed or are in the process of closing their doors due to declining membership.

Cutting the Class Meeting. The final nail in the coffin was the demise of the class meeting. From the time of the founding of Methodism, to be called a Methodist meant that you were a member of a class meeting. Yet over time this requirement was lost, and many began to see it as a sign that the movement had begun to falter. In 1856, at the age of seventy-two and in the fifty-third year of his ministry, the famous Methodist circuit rider preacher Peter Cartwright was already lamenting the loss of the class meeting:

“Class meetings have been owned and blessed of God in the Methodist Episcopal Church … For many years we kept them with closed doors, and suffered none to remain in class meeting more than twice or thrice unless they signified a desire to join the Church … Here the hard heart has been tendered, the cold heart warmed with the holy fire; But how sadly are the class meetings neglected in the Methodist Episcopal Church! … Is it any wonder that so many of our members grow cold and careless in religion, and finally backslide? … And now, before God, are not many of our preachers at fault in this matter?”

Reading Cartwright’s words, one can sense the grief of a man who had experienced the exciting energy of the Methodist revival and was now seeing that movement sliding toward institutionalization and into decline.

On my desk is a framed class meeting ticket from 1842 that belonged to a woman named Maria Snyder. Looking at it today, I can’t help but wonder, “What would Maria think of contemporary Methodism?” or “What would John Wesley or Francis Asbury think about the current state of the movement they started?”

Across the Western world, thousands of churches are closing every year. When will we feel grief over the state of our churches? Will a new generation once again heed the call to recover Scriptural Christianity? Might we see another disciple-making revolution spread across our country and around the world?

Winfield Bevins is the director of church planting at Asbury Seminary in Wilmore, Kentucky. Over the years he has served as a pastor, professor, and church planter. Some of this content is from WinfieldBevins.com, Marks of a Movement: What the Church Today can Learn from the Wesleyan Revival (Zondervan, 2019).