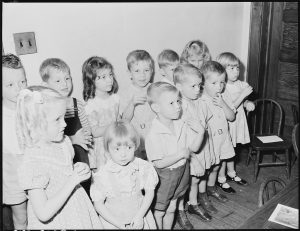 The American Sunday School Union was organized in 1827. By the 1840’s churches across America were beginning to build “wings” of classrooms for children and youth to be taught at  the church, replacing the catechism which based Christian nurture in the home – taught mostly by parents but also by the circuit riders when they made pastoral calls and interrogated the children on their mastery of the catechetical questions. In Methodism, Sunday school also replaced the Wesleyan styled “class meeting” as the locus of both fellowship and biblical exhorting.

Mainline Protestant church growth in the 20th century was primarily due to the influence and attendance of Sunday school. As the context of evangelizing or bringing youth to affirming Jesus Christ as personal savior, the Sunday school had replaced the revival. In most non-liturgical churches, Sunday school attendance was considerably higher than worship attendance. In churches where pastors had more than one church, primarily in rural areas, only Sunday school met every Lord’s Day. The Sunday School Superintendent was usually the most influential lay leader in the church; he or she presided over the “assembly” that met before and after individual classes went to their respective rooms. In The Methodist Church, by 1958, seven of every eight professions of faith came through the Sunday school.

In 1957, LOOK magazine’s cover headline was “Sunday School: The Most Wasted Hour of the Week?” The response was a firestorm of opposition, but the article was at least partially based on raw data from a survey of people who had attended Sunday school for at least ten years. They were asked a series of basic Bible-content questions and were found to be embarrassingly biblically illiterate. Ten years later, Sunday school in the more theologically liberal denominations began a precipitous free fall. The so called “mainline” denominations made a number of knee-jerk efforts to stop the ebbing tide, but “Humpty Dumpty” could not be “be put together again.”

By 2018, thousands of churches have literally no children in Sunday school. The only attendance left in those churches is in older adult classes. In many, perhaps most, independent church “plants,” there is no Sunday school at all, especially for adults.

First of all, why did this happen? For at least one documented answer, we must look  at the largest denominational “combo” in America in the 1880’s – The Methodist Churches, north and south. “John Vincent and his southern counterpart, Atticus Haygood, led Methodism in the post Civil War era to see the Sunday School…effecting the conversion or transformation for which Methodism had looked to revivals,” reported the superlative historian Russell Richey.

John Vincent was the General Agent of the Methodist Episcopal Sunday School Union and “wrote the script” for the replacement of the revival with the Sunday school. J. Lyman Hurlbut’s The Story of the Bible, and Vincent’s “Uniform Sunday School Lesson” shifted the premise of conversion from an identifiable experience of saving grace to an embrace of the insights of the new social sciences – psychology and sociology.

In 1882, Vincent wrote The Revival After the Revival. In it, he interpreted his parents’ evangelical theology as the “morbid, self-centered religion of my childhood.” He saw sin as a “habit that could be bleached out of a person by right associations.” He considered “being saved” as a selfish concept, making one “safe from the world and guaranteed a home in heaven.” Consequently, every piece of Methodist Sunday school curriculum was a bland form of Christianity – Old Testament biographical narratives, a portrait of Jesus as “gentle, meek, and mild”; and the embrace of conventional cultural morality. There was no mention of the atonement, Pentecost, or experiential grace.

Meanwhile in southern Methodism, Atticus Haygood was the counterpart of John Vincent. He was appointed in 1870 as editor in chief of all Methodist Episcopal, South, Sunday school curriculum. The lesson was a benign moralism to teach children to be good boys and girls. The biblical content was a romanticized story of Nativity, no mention of atonement, original sin, or the work of the Holy Spirit, and narrowly selected Epistle passages. His biographer wrote that Haygood “underwent a deconversion” from his inherited Wesleyan, Arminian faith.

Both Vincent and Haygood became bishops and helped shape Methodism for relevance in a changing culture. Their successor was George Albert Coe, a disciple of John Dewey of Columbia University, the “father” of progressive education in the public schools of America. Coe was the virtual “czar” of Methodist Sunday school theology for the first third of the 20th century. He wrote, “The goal of Christian nurture thus becomes the growth of the young toward and into mature and efficient devotion to the democracy of God and happy self realization.”

For decades, professionals trained to be Christian educators were called “Directors of Religious Education,” not “Directors of Christian Education.” H. Shelton Smith, professor at Duke Divinity School, wrote a book in 1940 that should have shocked the Christian Education world, but it was basically ignored. In Faith and Nurture, Smith wrote, “The closing years of the 19th century reveal a marked trend in liberal circles toward a reduced Christology.  The Christ of Sunday School became an historic Galilean, the supreme educator,  the master teacher.” Dean Inge, professor of divinity at Cambridge and Dean of St Paul’s Cathedral, wrote in the 20th century, “Contemporary liberalism as a creed is basically outmoded and must therefore be critically reconsidered and revised.”

Sunday school editors continued to write morality maxims, sentimentalized Bible stories, and selected psalms and epistle excerpts. The Sunday school, according to the famous LOOK cover article in 1957 had become “the only school in the world that was not a school.”

Therefore, when the Baby Boomers became adults in the 1960’s, they saw no value in going to Sunday school or taking their children in the way their parents took them. For one thing, they could recall very little that they had learned. For another, what they did learn seemed irrelevant to the generation of a sexual revolution and the Vietnam War. Gradually, slow erosion became a landslide and Sunday school’s Achilles’ Heel infected and affected the whole dimension of Christian nurture.