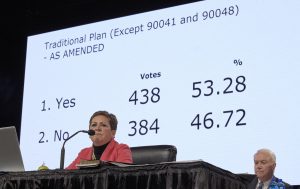 Bishop Cynthia Fierro Harvey observes the results from a Feb. 26 vote for the Traditional Plan, which affirms the church’s current bans on ordaining LGBTQ clergy and officiating at or hosting same-sex marriage. The vote came on the last day of the 2019 General Conference in St. Louis. Photo by Paul Jeffrey, UMNS.

Here is a brief summary of the accomplishments of the special called 2019 General Conference of The United Methodist Church held in St. Louis.

Given the opportunity to support the full court press of the majority of North American bishops in their advocacy of the One Church Plan, a decisive majority of delegates instead chose the Traditional Plan.

Thomas Lambrecht is a United Methodist clergy person, the vice president of Good News, and a member of the Commission On A Way Forward.