Weapons of Our Spiritual Warfare 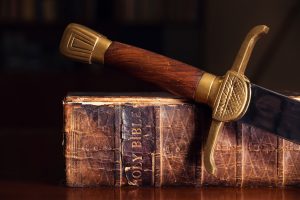 Bishop Frank J. Beard writes: “Paul compares the Word to a soldier’s sword: ‘Take the helmet of salvation and the sword of the Spirit, which is the word of God’ (Ephesians 6:12). The writer of the book of Hebrews compares God’s word to a double-edged sword: ‘For the word of God is alive and active. Sharper than any double-edged sword, it penetrates even to dividing soul and spirit, joints and marrow; it judges the thoughts and attitudes of the heart’ (Hebrews 4:12).”

Our world is under attack by a ruthless enemy – one that does not come from God. It is the job of every Christian and every church to unify and wage spiritual warfare against this destructive evil until it is defeated.

As I was praying the other morning and lamenting that there was not much we could do against this virus, I sensed in my spirit that as a spiritual leader I was taking the wrong approach. The Lord spoke very plainly to me, “Tell them about the weapons I have provided for them to use.” Like Moses, I argued, but even as I argued seven weapons came to mind.

Our current attack is from a vicious enemy whose primary purpose is death. As Christians we understand that this thief comes only to steal, kill, and destroy (John 10:10). He is a powerful destroyer, but we are not powerless against him or his vices.

God has given every believer an arsenal of weapons for the spiritual battles that we face. The one we serve is the “I AM” God (Exodus 3:14), the one whose very name means, “I will be what you need when you have need.”

The Apostle Paul reminds us in 2 Corinthians 10:3-4 that as followers of Christ we do not wage war as the world does. We have spiritual weapons because we are engaged in a spiritual battle. Our weapons are never directed at people. According to Paul, “Our struggle is not against flesh and blood, but against the rulers, against the authorities, against the powers of this dark world and against the spiritual forces of evil in the heavenly realms” (Ephesians 6:12).

1. Prayer, Praise, and Worship. In II Chronicles chapter 20, three enemy kings formed an alliance and declared war against King Jehoshaphat. The King turned to the Lord for help and encouraged the nation to fast and pray. The Spirit of the Lord came among them and God gave them this message: “Listen, King Jehoshaphat and all who live in Judah and Jerusalem! This is what the Lord says to you: ‘Do not be afraid or discouraged because of this vast army. For the battle is not yours, but God’s’” (II Chronicles 20:15).

Jehoshaphat assembled an army, but he did an amazingly unconventional thing. He placed the choir and the praise band out front! The power of prayer, praise, and worship was undeniable as the enemy army was routed without the King or his soldiers engaging in any physical fisticuffs.

2. The Word of God. Paul compares the Word to a soldier’s sword: “Take the helmet of salvation and the sword of the Spirit, which is the word of God” (Ephesians 6:12). The writer of the book of Hebrews compares God’s word to a double-edged sword: “For the word of God is alive and active. Sharper than any double-edged sword, it penetrates even to dividing soul and spirit, joints and marrow; it judges the thoughts and attitudes of the heart” (Hebrews 4:12).

3. The Name of Jesus. One of our strongest weapons is the name of Jesus. This name, supported by a personal relationship, is a powerful force the enemy recognizes and fears. “Therefore God exalted him to the highest place and gave him the name that is above every name, that at the name of Jesus every knee should bow in heaven and on earth and under the earth, and every tongue acknowledge that Jesus Christ is Lord, to the glory of God the Father” (Philippians 2:9-11).

4. The Blood of Jesus. Because of the shed blood of Jesus, believers are redeemed, sanctified (set apart), cleansed, forgiven, and justified (brought into right relationship) in the presence of God. Christ’s blood grants us entrance into the very throne room of heaven where we are welcomed as children of God.

The blood of Christ provides victory over all our enemies. “They triumphed over him by the blood of the Lamb and by the word of their testimony; they did not love their lives so much as to shrink from death” (Revelation 12:11).

5. Our Faith. Hebrews 11 highlights God’s hall of fame of men and women who, through their faith, accomplished seemingly impossible tasks.

Paul describes faith as a shield for believers. “In addition to all this, take up the shield of faith, with which you can extinguish all the flaming arrows of the evil one” (Hebrews 6:16).

The shield of faith protects us from the flaming darts of our enemy. Faith extinguishes the enemy’s fire and turns those sinister plans into blessings. Faith is a spiritual weapon that clears the way for us to receive God’s grace. Faith enables us to triumph over whatever the world throws at us. “… for everyone born of God overcomes the world. This is the victory that has overcome the world, even our faith” (I John 5:4).

6. Our Testimony. One of the last promises Jesus gave to his disciples was that they would receive, from the Holy Spirit, power to be effective witnesses. “But you will receive power when the Holy Spirit comes on you; and you will be my witnesses in Jerusalem, and in all Judea and Samaria, and to the ends of the earth” (Acts 1:8).

Jesus promised that their personal testimony would provide the evidence needed to spread the gospel message throughout the world. This power was promised for individual and corporate witnessing. Each personal testimony of the followers of Christ is a highly charged weapon connecting Christians to God’s grace and each other. Each testimony speaks of God’s presence and of the transforming power that defeats the enemy and inspires hope in the downtrodden.

7. Our Unity in Christ. We don’t often think of unity as a spiritual weapon, but it was one of the great prayers Jesus offered on behalf of his followers (John 17). It was also one of the keys that opened the door for the Holy Spirit to be poured out on the believers in Acts chapter two. As those early believers waited in obedience, and as they prayed together day-by-day, an atmosphere of unity was formed.

This tragic pandemic is an opportunity for the followers of Christ around the globe to unite and engage in spiritual warfare that will defeat and destroy the works of darkness. Each Christian, within their own unique context, will need to decide how God has called them to engage in this spiritual battle. Christian leaders will need to listen for the Lord’s voice (and nudging) to decide how best to rally, equip, and deploy the troops under their direction.

We dare not sit silently and idly by, wringing our hands and thinking that we are powerless against this pandemic. Jesus said about us, “You are the light of the world. A town built on a hill cannot be hidden. Neither do people light a lamp and put it under a bowl. Instead they put it on its stand, and it gives light to everyone in the house” (Matthew 5:14-15).

Now is the time to let your light shine for Jesus. People are searching for solutions and seeking answers to this pandemic. Believers are not powerless. We have been given weapons to assist in fighting against this evil. It is our job to stand up, stand out, and proclaim victory even before we see the end of the battle. Let us not shrink back or shy away because we don’t believe we can do anything.

Remember the story of Jehoshaphat. This battle belongs to the Lord.  Ultimate victory does not excuse us from engaging and utilizing the weapons God has provided for us to use in defeating this pandemic. Perhaps God has strategically placed us “for such a time as this!”

Frank J. Beard is the Bishop of the Illinois Great Rivers Annual Conference of The United Methodist Church. This article is adapted from his blog.