WCA Looks to the Future 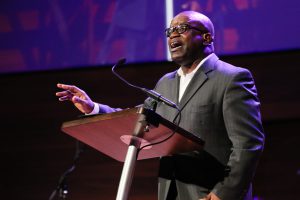 The Rev. Kenneth Levingston used his pulpit time before the Wesleyan Covenant Association to compare The United Methodist Church to the valley of the dry bones, as described in Ezekiel. Tough talk, but Levingston held out hope.

“If God can move by his spirit, and make dead bones dance, then God can move by the same spirit and call a dead denomination to dance again!” thundered Levingston, pastor of Houston’s Jones Memorial United Methodist Church. “He can make it shake, rattle, and roll again!”

The Wesleyan Covenant Association’s third public gathering, held October 14 at The Woodlands United Methodist Church near Houston, offered lots of stirring preaching and no indication of what the evangelical group’s next move might be in trying to shape the denomination’s future. The Commission on a Way Forward is to issue an interim report to the Council of Bishops in November, suggesting possible structural changes that might allow the denomination to hold together despite deep divisions over how accepting to be of homosexuality.

So, Wesleyan Covenant Association leaders — who issued no statement at this gathering, though they did during their first — admit that in some ways they’re on hold. “We’re like the rest of the church right now,” said the Rev. Jeff Greenway, chair of the association leadership council. “We’re in a place of waiting to see what the commission is going to bring forward.”

The association formed last year as an organization of United Methodist clergy, laity, and churches committed to what it describes as an orthodox understanding of Wesleyan Christian faith. Unlike some other advocacy groups within the church, it charges membership dues.

The group also holds that marriage should be for “the uniting of one man and one woman in a single, exclusive union,” and has complained that Bishop Karen Oliveto, who is married to another woman, continues to serve despite church law restrictions against gay clergy.

Since its organization after the 2016 General Conference, the association has grown to 2,500 individual, dues-paying members, and about 200 membership churches, representing some 100,000 United Methodists around the world, Boyette said. The meeting at The Woodlands United Methodist attracted a few hundred people, but Boyette said simulcasts to 64 U.S. sites brought total attendance to about 2,300. He added that the association would continue to use technology to reach local churches.

At the October 14 gathering, association leaders introduced a book, A Firm Foundation: Hope and Vision for a New Methodist Future, and an app as resources for small groups. “We want to empower people at the local church level,” Boyette said. “We want (the association) to grow from the bottom up.”

The association also welcomed to its leadership council the first international members, from Africa and the Philippines. One of them, the Rev. Forbes Matonga of Zimbabwe, preached at the gathering.

The Rev. Jerry Kulah of Liberia, another new council member, praised the theological focus of the association and leaders’ embrace of global perspectives. “Africans do not want to be accommodated,” Kulah said in an interview. “Africans want to be part of the solution.”

Among the gathering’s preachers was retired Bishop Robert Hayes Jr., now bishop-in-residence at The Woodlands church. Texas Conference Bishop Scott Jones attended, but did not speak. “My role as bishop is to remain connected to as many different groups as possible, to help improve the quality of conversation about the future of our denomination,” Jones said. 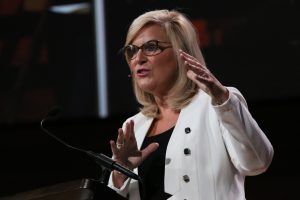 The day was dominated by preaching, with speaker after speaker calling for a return to an evangelistic focus. “People need to take an unapologetic stand for Christ, for biblical standards, always erring on the side of grace and love,” said Jennifer Cowart, executive pastor of Harvest Church, a United Methodist congregation in Warner Robins, Georgia.

Without specific reference to the status of LGBTQ people in the church, speakers emphasized the authority of the Bible over the values of contemporary culture.

Greenway described the gathering as “a family reunion for folks who are like-minded and warm-hearted by Jesus in the orthodox Wesleyan tradition.” But the question about how or whether The United Methodist Church can avoid splitting was always in the background, and sometimes came to the fore.

Boyette noted in his remarks the recent formation of two more groups, the “Uniting Methodists” and the “United Methodist Association of Retired Clergy.” Both seek to influence the debate leading up to a special General Conference in 2019. And that’s fine, Boyette asserted. “These are people of good will that have different visions for the church,” he said in an interview. “It helps the church to really have clarity in what we’re facing.”