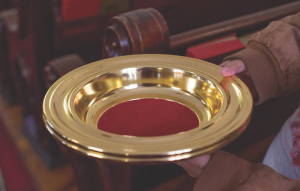 The United Methodist Church already is feeling financial fallout from COVID-19’s devastating spread. In a May 29 online meeting that also included prayers for an end to racism, General Council on Finance and Administration board members got a glimpse of some of the financial challenges ahead.

For the first four months of the year, general church apportionment receipts in the U.S. dropped about $3.2 million compared to the same period in 2019. April, so far, saw the steepest decline — with the collection rate down 26 percent compared to last year and 45 percent compared to 2017.

“This indicates the impact that the coronavirus has had so far on general church collections,” Rick King, GCFA’s chief financial officer, told the board.

By April, United Methodist churches around the globe had suspended in-person worship to slow the deadly coronavirus. Congregations are just now slowly returning to their buildings but with a whole checklist of added and potentially expensive precautions.

Funding for the denomination’s seven general church funds comes from conferences, which in turn ask for apportionments – requested giving – from local churches. Typically, more than 85 cents of every dollar in local church revenue remains with that congregation. About 2 cents of each dollar given goes to general church ministries.

For now, many U.S. conferences have allowed churches to hold off on apportionments to bolster their ministries, and at least three of the 54 U.S. conferences have laid off or furloughed staff. An untold number of United Methodist churchgoers also are now out of work, as the U.S. sees its highest unemployment rate since the Great Depression in the 1930s.

Already faced with uncertainty, the denomination’s Episcopal Fund that supports bishops and most United Methodist general agencies had budgeted for 2020 based on a 70 percent apportionment collection rate. At the current giving rate, the General Council on Finance and Administration projects 2020 apportionments could come well below that.

The GCFA board spent part of its meeting hearing an update on the Episcopal Fund, which was in peril of running out of money even before the current crisis. At present, King said, the fund’s revenue is about $422,000 lower than budgeted, but because of reduced spending, the bishops are making up for some of that lost revenue. Still, at a 65 percent annual giving rate, GCFA projects that the fund could be in the red by the end of 2022.

In May, the bishops agreed to form a task force that will look at strategies to move the Episcopal Fund toward financial sustainability. Among the ideas on the table is reducing the number of U.S. bishops. The task force plans to release its recommendations in November.

Over the past three years, the GCFA board each summer has set bishops’ salaries and support for their office staff. However, the board is postponing any action until it receives the task force’s report, said the Rev. Steve Wood, who chairs the board’s committee on general agency and episcopal matters.

Amid the drops in giving, various U.S. United Methodist entities, including churches, conferences, and general agencies, have found some relief from Paycheck Protection Program loans. The U.S. Small Business Administration program, initiated in response to the coronavirus, aims to help small businesses – including nonprofits – keep workers on the payroll.

Most of the 10 general agencies that receive church giving, including GCFA, have applied for and received loans through the program. The one exception is the United Methodist Board of Higher Education and Ministry. All told, the agencies now have nearly $7.9 million in loans. Based on the program’s requirements, the agencies each expect their loan amounts to be forgiven.

“Some agencies have returned funds they deemed to be in excess of the amount that will be forgiven,” King told United Methodist News.