The Solid Rock of The Kingdom of God 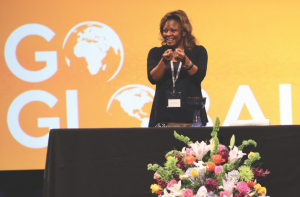 In addition to being a local pastor, I am also a chaplain for the Charlotte-Mecklenburg Police Department in North Carolina.

A couple of weeks ago, I was in my sergeant’s office watching a video of Mark Gungor, a popular speaker and minister, using two mannequin heads as props in a sermon. One head was male. The other was female. After jokingly doing the sign of the cross, he pointed to the female head and tried to explain how women think. He described the female brain as intricate as an internet expressway. “Women can think of many things at one time,” he said. All of our emotions get involved. We hop from one subject to the next and to the next.

Then he pointed to the male head and said that a man’s brain has little boxes in it. There’s one thing in one box. Men have a box for the spouse. A box for the children. Another for the job. None of the boxes can touch. “Men open one box at a time and that’s what you deal with,” said the minister. You open one, and then the next, and then the next. Jokingly, he said men even have a box in the basement for the mother-in-law.

“Also,” the pastor said, “men have what’s called the Nothing box.” That’s right, the Nothing box and in that box is nothing. That’s why when wives ask husbands what they are thinking about they can so often say, “Nothing.”

The minister’s humorous illustration made me think about the correlation between how men keep track of the boxes in their brains and the way that our society encourages us to put people into boxes. We all are tempted to do it. We want to try to put people in a box, close it up with a nice bow, and put a label on it. Why? Because it makes us feel better when we can put someone in a box and label that person. Therefore, it validates us.

Paul said, “Do not be conformed to the world.” Why? Because the world is not yet redeemed. It is not spiritually discerning. It does not hear from God. Yet we still allow it to dictate how the body of Christ is supposed to think.

When Jesus came up out of the waters at his baptism, the voice of heaven names who he is as the Son of God. “This is my Son, whom I love; with him I am well pleased” (Matthew 3:16). Then Jesus goes into the wilderness and is tempted for 40 days. After that time of temptation, he begins to preach. “Repent! For the kingdom of heaven is at hand!” Then he begins to teach and heal.

The Sermon on the Mount is our defining moment as the body of Christ. It begins, “Blessed are the poor in spirit, for theirs is the kingdom of God” (Matthew 5:3). In other words, blessed are you who know that we are spiritually bankrupt and that we need something outside of ourselves. That is Jesus Christ.

Jesus goes on to teach about salt and light, and how our righteousness should exceed that of the scribes and Pharisees. He teaches us about humility, to seek the kingdom of God, and not to be driven by selfish ambition.

He was teaching about the foundation. If you did not dig about 10 feet into the bedrock, the storms would come and knock the house over. Storms hit all the houses – those that had foundations at the bedrock and those that were merely on the shallow sand. Which one will be left standing? The one on the solid foundation.

Of course, Jesus was not just talking about the physical building of brick and mortar.  He was talking about a spiritual foundation.

Or, you can follow the path with a solid foundation. It may not be easy. It definitely won’t be comfortable. The way is narrow. There will be persecution. There will be attacks. But the end result will be eternal life.

Jesus gave them a choice. Which way will you choose? The sinking sand or the solid foundation?

That is the choice we have today as we live in the kingdom of God. We can choose the sinking sand of the establishment. We can continue to be comfortable and at ease.

When Jesus spoke those words on the Sermon on the Mount, this was the defining moment for those who made the choice to enter into the kingdom of God through Jesus Christ. What do I mean by defining moment? It was the moment where Jesus set forth the theme and nature of the kingdom. It was also showing God’s grace and showing how Christians are to live.

Jesus said we will be lied to, mocked, and persecuted, but rejoice because it happened to the prophets. The kingdom of Heaven will be ours. This is our defining moment. Let us celebrate that together.