The Power of a Transformed Life 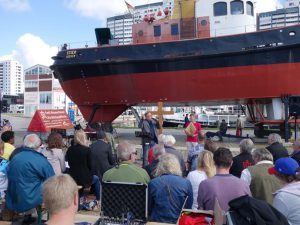 The Rev. Christhard Elle, center, in front of cross, conducts an outdoor worship service near the Columbus Shopping Center in Bremerhaven, Germany. Photo courtesy of the Rev. Elle.

If anyone is in Christ, the new creation has come: The old has gone, the new is here.” — Saint Paul (II Corinthian 5:17).

An essential element of the magnetism of the Christian message is the opportunity for a second chance, a clean slate. When we were kids, it was called a do-over. On the golf course, they call it a mulligan. Whatever our background, we are universally in need of a Christ-centered transformed life.

Few things in life have the spiritual atomic power of a changed life. When the religious leaders were questioning a man born blind who had been touched by Jesus, his response was resolute and surefire: “One thing I do know, that though I was blind, now I see” (John 9:25).

“We are therefore Christ’s ambassadors,” Saint Paul wrote to the Corinthians, “as though God were making his appeal through us.” This is beautifully illustrated in three recent United Methodist News Service (UMNS) stories from around the globe testifying to Christ-centered transformation.

The Rev. Christhard Elle was appointed to the United Methodist congregation in the northern port city Bremerhaven – an economically struggling area 100 miles west of Hamburg.

“People said our friends are already here, we can’t invite anyone to come, so we took church outside,” Elle said. Quite literally, they took it outside. Congregants built a mobile trailer that allows them to store and carry all the supplies for a church service. They held their first outdoor worship service in 2010 on the highest peak in Bremerhaven known as “Drachenberg” (Dragon’s Hill).

“I felt like going outside was giving a testimony,” said church member Ruth Willinghöfer. Remarkably, “about 70 people who were out sledding came and sat with the members and listened,” Elle told UMNS. “From then on, we knew our mission was that we were going to go outside.” The church now has two trailers and a moveable cross.

One recalls John Wesley’s observation: “It is no marvel that the devil does not love field preaching! Neither do I; I love a commodious room, a soft cushion, a handsome pulpit. But where is my zeal if I do not trample all these underfoot in order to save one more soul?”

In December of 2016, there were about 200 people in attendance at the outdoor service. “We went through town and had a donkey with Mary and Joseph,” Elle said. “We handed out the Christmas story and a lot of people asked what this had to do with Christmas.” This is a far too common occurrence in our contemporary culture. We can rightfully be frustrated that our neighbors don’t know that Santa is not the reason for Christmas or that the bunny has nothing to do with Easter orwe can share the age-old stories that give the depth and poetry and vitality to our biblical faith.

“Each week strangers are drawn to the gatherings, hear the good news and have the opportunity to share in Holy Communion and other means of grace,” Dr. Kimberly Reisman, executive director of World Methodist Evangelism, told me about the work of Pastor Elle. “This small congregation has been reignited as new people are brought into the community of faith and existing believers are given the courage to live out their faith more visibly.”

Karina Griese said that the outdoor services have strengthened the faith of church members. “We get to be outside and share our faith freely and say, ‘Yes, I’m a Christian.’ How many people are bold enough to give testimonies even if there are strangers and guests they don’t know?” she asked.

2. Bringing love to the outcast in the Philippines. 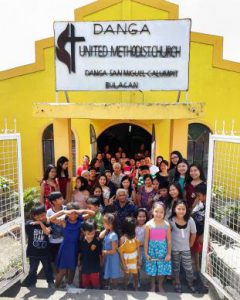 “Lord, you brought me here because you want me to do something for you,”

prayed the Rev. Mienie N. Tolentino, pastor of Danga United Methodist Church in Calumpit – 30 miles north of Manila. “Here I am to fulfill my utmost and best through your help. I commit everything that I can and can’t do.”

That was Pastor Tolentino’s solemn prayer before she responded to a controversial government plan in its war on drugs by reaching out to traffickers and addicts.

“For three months, the church offered weekly Bible studies with seven participants attending,” reports UMNS. “After the program ended, five of those joined the church, along with their families and neighbors. They now attend worship services and Bible studies regularly.”

It was not what Tolentino expected. “I never thought that it was the start of having them all in the church,” she said. “The wives said they joined because they saw the big change in their husbands.”

Members of the congregation are grateful that their pastor took the step of faith to conduct the Bible studies. “We are really amazed by the efforts made by Pastor Tolentino when she was able to convince five out of many surrenderees to recognize and accept our Lord Jesus Christ. It is a miracle because their families and neighbors are with them,” said Florencio Santos, church council chair. 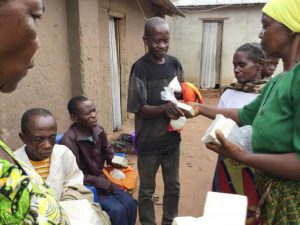 Muzinga Bahati, chairperson of United Methodist Women for the Nyunzu district, donates soap, lotion and blankets to pygmies in the Tanganyika province of the Democratic Republic of Congo. Photo by Betty Kazadi Musau, UMNS

3. The ministry of reconciliation in the Congo.

Because of widespread extreme economic hardship, life is difficult enough for the more than 2.6 million United Methodists in the central African nation of the Democratic Republic of Congo (DRC). Nevertheless, United Methodists have been involved in a vital ministry of reconciliation. For the past several years there have been severe and violent clashes between the indigenous pygmies and Bantus, the majority ethnic group, in the Tanganyika province.

In February, the United Nations refugee agency warned of a “humanitarian disaster of extraordinary proportions” in the DRC as this area “plunges further into violence, triggering spiraling displacement and human rights abuses.” In response, United Methodists in this area have been welcoming pygmies into their churches and communities.

The Rev. Kongolo Muzila Nkulu Francois, a 70-year-old father of eight, is assigned to village mission and evangelism in the Kilwa village, 55 miles from Nyunzu. The United Methodist Church there has almost 300 pygmy members.

“I love to reach out to them. They are special people. They do not read but they are good at listening,” Kongolo told UMNS. “It needs love and determination to do ministry to pygmies. Sometimes, I wake at 2 a.m. and walk from Nyunzu to Kilwa and reach Kilwa in the morning. They are children of God and God needs their soul,” Kongolo said.

“As a pastor shepherding them, there is one Bible, one hymnal book. I read the Bible for them and teach them songs,” he said. Kongolo hopes to one day have a Bible study program and provide audio Bibles to those in the remote area.

Fellow United Methodists such as Pastors Elle, Tolentino, and Kongolo are literally half-a-world away in Germany, the Philippines, and the Republic of the Congo. Nevertheless, their ministries are in sync with the very best impulses of the worldwide Wesleyan message of new life in Christ. That is why they are reaching people like outcast pygmy families, Filipino drug traffickers, and those who don’t know that Mary and Joseph have a connection to Christmas. Their love of Christ should inspire us and their innovative ministries should broaden our horizons for outreach.

As Christ’s ambassadors, we have good news for our friends and neighbors. “We implore you on Christ’s behalf: Be reconciled to God,” Paul wrote. “God made him who had no sin to be sin for us, so that in him we might become the righteousness of God” (2 Corinthians 5:16-21). That is the transforming love we need to share.

Steve Beard is the editor of Good News. We wish to thank Vicki Brown, Gladys Mangidvyos, and the Rev. Betty Kazadi Musau for their reporting.