Suffering for the Sake of Christ 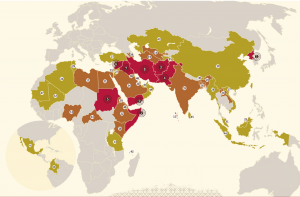 Hannah Cho grew up in North Korea, a country where Christians suffer the widest extent of persecution in the world. Along with her husband, Cho was mercilessly tortured for her faith in internment camps. “My mother only taught me one prayer,” she says. “But I still pray it every day for my family and for my country: ‘Hanonim, Hanonim! Lord, Lord, please help!”

Hannah Cho is not alone. All around the globe, men and women and children face brutal torture because of their faith. In India, for example, a crowd gathered with sticks in hand to attack Pastor Rohan, his wife Neha, and their family in the middle of the night. Accusing the couple of evangelizing a young boy in their village, the people beat them to the point of bleeding and caused the death of two of their children.

Boko Haram militants broke into Yakubu’s home in Nigeria, looting everything and attempting to cut off his head. Though he survived, he continues to suffer because of his scars even five years after the attack.

In first Corinthians, the apostle Paul makes a profound statement. “If one part suffers, every part suffers with it; if one part is honored, every part rejoices with it. Now you are the body of Christ, and each one of you is a part of it.” This statement is a beautiful, if not challenging, mystery. Whereas we were once individuals, we are now irrevocably connected.

Whether we are quick to admit this or not, our individualistic and Western sensibilities are a bit uncomfortable with this concept. As a nation we often struggle with fear of commitment, laud independence, and strive to be able to take care of ourselves.

Yet, this attitude is far afield of the heart and breath of scripture where we are called the body of Christ. Paul goes so far as to say that not even a single limb can claim autonomy from the rest. Standing in this all encompassing kind of unity is never more important than when members of Christ’s body are suffering.

Open Doors, a group who supports the persecuted church, published the 2018 World Watch list, a report of the 50 most dangerous countries. Topping the list is North Korea, followed by Afghanistan, Somalia, Sudan, Pakistan, Eritrea, Libya, Iraq, Yemen, and Iran.

While the majority of countries with the most severe levels of oppression have a high concentration of radical Islamists, this is not the only contributing factor. In countries with state mandated religions, some of which have blasphemy laws, Christ followers experience family and state pressure to recant their faith. Ongoing war, corrupt governments, and drug cartels only add to the violence that constantly surrounds believers around the world.

Open Door provides Bibles, emergency aid, discipleship training, vocational skills, trauma counseling, advocacy, and a host of other services to the suffering church. Working in more than 60 countries around the world, their extensive reporting provides an indispensable prayer and action plan for Christians to remember their persecuted brothers and sisters.