On May 24, Methodists all over the globe commemorated the 279th anniversary of John Wesley’s “heart strangely warmed” experience at Aldersgate Street in London. While we generally mark the event as Wesley’s evangelical conversion, his own account will reveal that it is not merely about conversion but about his theology of salvation. Two key theological themes emerge in his narrative, namely: 1) how one is saved, and 2) how one knows that he or she is saved. Let us begin by examining his journal:

“In the evening I went very unwillingly to a society in Aldersgate Street, where one was reading Luther’s Preface to the Epistle to the Romans. About a quarter before nine, while he was describing the change which God works in the heart through faith in Christ, I felt my heart strangely warmed. I felt I did trust in Christ, Christ alone for salvation, and an assurance was given me that he had taken away my sins, even mine, and saved me from the law of sin and death” (Journal, May 24, 1738, Works, 18:249–50).

As he was listening to the reading, Wesley described: “I felt my heart strangely warmed. I felt I did trust in Christ, Christ alone for salvation….” What did he mean by this? Wesley was clearly referring to his experience of what he would call “Justifying Faith” in keeping with the Apostle Paul’s teaching, for example, in Romans 5:1: “Therefore, since we are justified by faith, we have peace with God through our Lord Jesus Christ…” (NRSV). In other words, in order for one to be saved, one needs to have that kind of faith. Wesley began to recognize his need for it two years earlier when he first encountered the Moravians on his voyage to Georgia and as he fellowshipped with them in Savannah. Augustus Spangenberg, one of the leaders of the Moravian mission in Georgia, led Wesley to realize his need for Justifying Faith when he asked him, “but do you know He [Jesus] has saved you?” (Journal, February 7, 1738, Works, 18:145).

What is worth noting here is that none of Wesley’s Moravian guides told him to simply recite the “sinner’s prayer” or “accept Jesus Christ as Lord and Savior” as we would typically encourage seekers today. They did not prescribe shortcuts or formulas for attaining this faith. For them, as well as Wesley, faith was a gift from God. Wesley even called it a supernatural sense that God infuses to us so that we can declare with great certainty “a sure trust and confidence that Christ died for my sins, that he loved me and gave himself for me” (Sermon 5, “Justification by Faith,” IV.2, Works, 1:194). Such understanding is very much consistent with Paul’s reminder in Ephesians 2:8 that it is “by grace” that we “have been saved through faith” (NRSV).

Wesley wrestled to gain this kind of faith for months leading up to Aldersgate. The urgency for this experience reached its peak as the evangelical revival began to take hold of his Holy Club friends in London in the beginning months of 1738. At one point, Wesley even felt that he should stop preaching until he had received the gift of Justifying Faith, but the Moravian Peter Böhler encouraged him to “Preach faith till you have it, and then, because you have it, you will preach faith” (Journal, March 4, 1738, Works, 18:228). It also did not help that even his brother Charles experienced it three days earlier on Pentecost Sunday as he felt a “strange palpitation of heart.”

Prior to Aldersgate, we find in Wesley a broken man. It was most likely out of frustration that he “went unwillingly” to the meeting at Aldersgate Street. But just as he had seemingly given up hope in gaining this faith, it was also at that very moment that God took hold of his heart and he felt it “strangely warmed.”

Wesley then testified that “an assurance was given me that He had taken away my sins, even mine, and saved me from the law of sin and death.” What did he mean by this? He is essentially indicating that his God-given Justifying Faith led to his Justification — that God pardoned him (“taken away my sins”) and saved him (“saved me from the law of sin and death”). But to be justified was not merely head knowledge for Wesley. Notice that he used the word “felt” twice and added, “an assurance was given” to him. Wesley was essentially referring to the experience described by Paul in Romans 8:16: “The Spirit itself beareth witness with our spirit, that we are the children of God” (KJV). This is what Wesley and later Methodists called the “witness of the Spirit,” a phrase commonly associated with the doctrine of Assurance.

For Wesley, the witness of the Spirit is the Holy Spirit’s work to assure us that we are God’s children. It is a Spirit (upper case “S”) to spirit (small case “s”) communication. When this happens, you just know it! It is something that cannot be simply explained through words. You will not know through human language, but through the language of the Holy Spirit that is impressed in your spirit. This witness is a supernatural act of God that assures the believer that his or her relationship with God is secured.

What can we draw from Wesley’s experience? If faith is God’s gift, we should not force-feed it on people or mislead them into thinking that by simply reciting the sinner’s prayer they have somehow attained it. For Wesley, Justifying Faith is not merely intellectual “assent.” Even the devil is capable of acknowledging that Jesus is God, he argued (Sermon 1, “Salvation by Faith,” I.1–5, Works, 1:119–121). Unfortunately today, we have short-circuited our way to Justifying Faith and we wonder why we end up with many “almost Christians” — those who look and talk like Christians but are not deeply rooted in Christ (See Sermon 2, “The Almost Christian,” Works, 1:131–141). It is time to let Wesley’s Aldersgate experience inspire us to recover the understanding that faith must be cultivated through discipleship.

If faith is a gift from God, we need to know that God will never leave us clueless as to whether we have indeed received it. We cannot just “claim it” and hope something happened. With the Holy Spirit as our witness, we will know and feel it. The Holy Spirit will testify this assurance to our hearts! But consequent to this sense of faith, we also need to take into account the importance of the role of supernatural encounters in Christian experience. 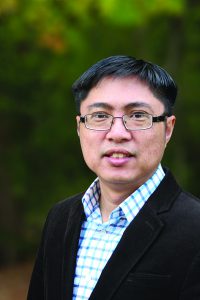 God touched Wesley at Aldersgate and that is why Wesley “felt” his “heart strangely warmed.” I suspect Wesley was not speaking in metaphorical terms here. He literally felt heat in his chest! He had a supernatural encounter with God. This strange warmth led him to know for sure, at that very moment, that God had surely justified him. It is my prayer that Aldersgate will inspire us to open ourselves up to the possibility of encountering the Holy Spirit in a supernatural way. This is probably what is missing today for most people who call themselves Methodists. While we celebrate Wesley’s Aldersgate experience for its significance to Christian history, may we, just like Wesley and many of the saints who came before and after him, also seek to have our own Aldersgate experience.

Luther Oconer is assistant professor of United Methodist Studies and director of the Center for Evangelical United Brethren Heritage at United Theological Seminary in Dayton, Ohio. He is also an ordained elder from The United Methodist Church in the Philippines.