Speaking Up for Women 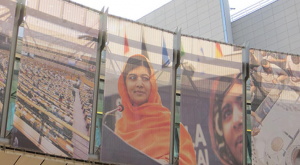 Noble Peace Prize laureate Malala Yousafzai is the survivor of a Taliban assassination attempt. Her image was on display in 2016 on the complex of parliament buildings of the European Union in Brussels, Belgium. (Shutterstock).

​​​Now that the Taliban has taken over Afghanistan, many are concerned about the future for women and girls in that country.

The Taliban has a history of oppressing women and depriving them of human rights, as well as administering harsh punishments for various offenses against Islamic codes.

The U.S. made a big difference in improving the situation for women and girls in Afghanistan, investing $780 billion in women’s equality projects. As a result, millions of girls were able to attend school. Enrollment at the University of Kabul is 53 percent women, and a similar percentage are participating in advanced degree programs there. Women are starting to work in a significant percentage of government positions.

Will women be able to continue going to school and work outside their homes? Will they be able to go out of the house without an accompanying chaperone? These basic freedoms that we take for granted are now in question there.

“Afghan girls and young women are once again where I have been — in despair over the thought that they might never be allowed to see a classroom or hold a book again,” writes Malala Yousafzai, a survivor of a Taliban assassination attempt, in the New York Times. She is the youngest-ever Noble Peace Prize laureate. “Some members of the Taliban say they will not deny women and girls education or the right to work. But given the Taliban’s history of violently suppressing women’s rights, Afghan women’s fears are real.”

Christians ought to be in the forefront of speaking up for the equality of women. In the first chapters of Genesis, God creates woman as an equal and complementary partner for man (Genesis 2:18-25). Women and men share equally in being made in God’s image (Genesis 1:27). One can go so far as to say that the image of God in humanity is incomplete if considered only as one gender.

That is why it is so disheartening to read the perceptions of some non-Christians who believe conservative Christians take the same oppressive attitude toward women that the Taliban do. A recent tweet on Twitter about the Afghan takeover reads, “A true cautionary tale for the U.S., which has our own far religious right dreaming of a theocracy that would impose a particular brand of Christianity, drive women from the workforce and solely into childbirth, and control all politics.”

As Dr. David Watson, academic dean at United Theological Seminary, replied, “I know exactly zero Christians who want to do this.” He is right on point. In all honesty, even those in other Christian denominations that do not permit women to serve in leadership roles in the church do not espouse the kind of “Handmaids Tale” hysteria propped up on Twitter.

Those of us within the Wesleyan/ Methodist tradition have a seriously different way of thinking and processing our spiritual life together than do some Christians who forbid women from teaching Sunday school or leading Bible studies that contain men. In some denominations, women cannot serve as pastors or priests. And in some denominations, women cannot even vote in a congregational meeting.

I am glad to be part of a tradition that honors the place of women as equal to men, both in the church and in the world. In the new Global Methodist Church, women will play an important role in leadership and ministry, for which I am grateful. While I am aware – and saddened – that there are still United Methodist congregations that refuse to accept the ministry of a female pastor, women’s equality will be a non-negotiable issue in the new denomination.

In our own Wesleyan tradition, we begin with Susannah Wesley, who taught sons John and Charles (and the rest of her 17 children) in the home, especially regarding the Bible and spiritual matters. Throughout her life, Susannah was a confidant and advisor to John, not afraid to disagree with him and offer strongly worded advice! As the early Methodist movement grew, women served as class leaders and lay preachers. Women were ordained as clergy in some branches of Methodism as early as the 1800’s.

There have been some cultural circumstances where it did not make sense for women to serve in a particular role. For example, women were unsuited to serve as circuit riders in America from the perspective of their own safety, given the physical hardships circuit riders had to endure, as well as the propriety of a woman alone on the frontier. But one should not extrapolate from these particular situations that women are generally unsuited for leadership.

Some quote I Timothy 2:12, “I do not permit a woman to teach or to have authority over a man; she must be silent.” Many scholars take this verse to refer to the specific situation Paul was addressing in Ephesus. Otherwise, it would not make sense for this same Paul to extol Priscilla as his coworker (regarding her as his equal), recognizing that she taught the preacher Apollos (Acts 18:24-26).

Of course, women may exercise leadership differently from men. It has been shown that women’s brains are wired differently than men’s, and that women general think in different ways than men. We should not expect that women ought to “lead like a man.” That would be a more subtle, but still insidious, form of discrimination against women.

As Christians, we need to welcome the gifts and perspectives of women on an equal basis with men. One’s gifts and perspectives may be different from the other’s, but that does not make one better than the other. The Body of Christ is not complete and able to function well if some of its members are not fully integrated as working members of the Body (I Corinthians 12). The Body is weaker to the extent that it does not use certain parts to their fullest potential. It would be like the proverbial saying of trying to “fight with one hand tied behind your back.”

As the father of three grown daughters and grandfather to two girls, I am conscious of their great potential as human beings. Seeing the basic equality and freedom of women questioned in other countries makes me appreciate the freedom we have here in the U.S.

The U.S. and its allies enabled a whole generation of Afghan women and girls to grow up receiving an education and able to contribute more fully to the functioning of their society. I hope that the nation’s new leaders will allow those women to continue playing an important role in building a strong and healthy Afghanistan. Failure to do so would be a travesty against those women and a tragedy for their nation.

The same is true of our church. Whether in the current United Methodist Church or in a proposed Global Methodist Church, we must be committed to welcoming and seeking out the gifts and contributions of women on an equal basis with men. There must be no room for a rejection of persons for leadership simply because of their gender. The cause of Christ needs “all hands on deck!” Every person is a valuable team member essential for carrying out Christ’s mission in a darkened and deceived world.