Reunion of the Rescued 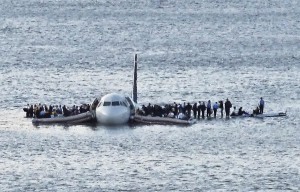 Survivors of U.S. Airways flight 1549 wait for rescue on the wing. Photo by Associated press.

In January 2009, U.S. Airways flight 1549 took off from New York’s Laguardia airport headed for North Carolina. The passengers settled back in their seats for the takeoff, but they weren’t settled for very long.

Three minutes into the flight the plane struck a flock of geese, and passengers looked out the window to see that one of the engines was on fire. Then both engines shut down and without power the plane quickly began to descend.

What happened next made international news. Captain Chesley Sullenberger, known by his friends and now the world as Sully, made more split second decisions than you and I can even imagine. Realizing he couldn’t make it back to the airport, he called the cabin to brace for impact and then took aim for the Hudson River. He even had the presence of mind to look for an area that was clear but also close to the ferry boats that criss-cross the Hudson, knowing they would need someone to quickly come to their aid.

A few moments later, the plane plummeted into the river, and began to sink.

The iconic image we all remember is that of the plane, half submerged in icy water (it was January in New York – 20 degrees outside) with all 155 passengers and crew standing out across the wings, crowding together as boats raced from all directions toward the sinking plane.

What could have ended very differently ended with everyone safe in their own bed. The news stations called it “The Miracle on the Hudson.” Every single passenger on that flight was saved.

Captain Sully was an immediate hero. You know you’ve reached international hero status of epic proportions when they make a movie about you and you are played by Tom Hanks!

Reunions. Within a couple of months of the accident one of the passengers hosted a reunion at one of their homes for passengers and crew. They called their gatherings: “celebrations of life.” When they met, they called one another by their seat-numbers. As in: “Nice to see you again 22C!”

One young man, Ben Bostic, was 20A. Before the flight, he had spotted a beautiful young woman in the airport with sandy brown hair grabbing a bite to eat. It seemed miraculous that she ended up on his plane – but he couldn’t find the courage to talk to her or ask her out.

Six months later, at a celebration of life gathering, he got up the nerve to approach 17D, whose name was actually Laura. They have been inseparable ever since. The couple now flies around the world together. When asked if they’re afraid of flying, they said that experiencing a miracle made them want to get as much out of life as possible.

Another couple, Karin Rooney and her boyfriend had been on the flight together. They had been struggling with their relationship and were about to break up, but Karen said “when the plane crashed, I just knew on that wing he was the one I wanted to be with.” They married shortly after the crash and have a daughter named Elena.

There are other miracle babies born after that day who would never have been born if things had gone differently. At every reunion, they pass the babies around. Every gathering they hold is a miracle after the miracle – It’s a reunion of the rescued.

WCA. When you told people you were coming to Chicago for some strange new thing called the Wesleyan Covenant Association, it’s likely that you were asked questions: What are we doing here? What is the purpose of the WCA?

Put simply: This is a reunion of the rescued. We are meeting because together we were saved; together we find hope in our shared faith, and so together we stand. We were, all of us, sinking deep in sin, and Jesus rescued us. And while you may never have laid eyes on most of the people in this room before today, we know the deepest thing we have in common is this: when we were going down, Christ reached us and Christ redeemed us.

It’s no secret that United Methodism suffers from a perennial identity crisis. We have to remind ourselves from time to time who we are. It goes much deeper than an experience at Aldersgate when John Wesley’s heart was strangely warmed.

If you want to know why we’re here, you have to go back to the cross – it’s our miracle moment. There can be no unity among United Methodists without the unity of the cross.

Many of us feel that the church we love has been in a free fall of sorts – declining in influence, power, and purpose. And while we have looked for a steady and decisive hand to provide a safe landing, we have witnessed indecision, fear, and dysfunction from many who should be providing leadership. We have wanted someone or some group to say it’s not too late.

The people called Methodist may have a rough landing ahead of them. But we can still make decisions and we can still take actions that will save this great gift of Wesleyan orthodoxy and that will keep safe those who are in our care, and will stir to action those looking for leadership. We are here because we need our own miracle.

Leaders have stepped up and said, the Gospel of Jesus Christ and the church of God matter too much to do nothing but wait and hope and see what happens. We must act. We are here to say regardless of what the future may bring, we will stand together. We are brothers and sisters; we are family; and we will never forget or walk away from each other.

At the same time, many men and women come from embattled annual conferences where those who hold to traditional United Methodist beliefs and standards are treated like outsiders within the church that ordained them. Even in great times of pain and division in their own context, we want to stand with them. We praise God that they have not left us. And we will not leave them.

Over the years, I’ve attended many United Methodist events and wondered if it had been worth the time. When I return home, I am often asked, “How was that Methodist thing you went to?” Sometimes all I can say is: “Well, at least the fellowship was good.” I’ve grown tired of things with the Methodist name lacking the purpose and drive of the Methodist movement that the Wesleys began.

But there are also times when we can’t even give that answer. Perhaps you’ve been in gatherings where you found yourself attacked and accused of being harmful and hurtful because you stood on the Word of God and chose to uphold the covenant you made in your vows of baptism and ordination – a covenant that holds us together not only with United Methodists but with the historic and orthodox Christian faith throughout time.

Are these our only options? A bland Christian unity where maybe the fellowship is good but we never do anything of purpose, or one long fight with no end in sight?

When people ask you if this was one of those typical Methodist things, you tell them “No!” This, finally, was a celebration of life, not of decline and death. This was a reunion of the rescued. That the cross of Jesus – the narrative in which death is overcome – was not some abstract history but a very present and driving reality pushing us into a new day when the Church, vibrant and alive, acts again as the agent of Christ for the transformation of the world.

It’s a story so old that it becomes new every time someone is rescued again. This is why we have given our lives to Jesus and His church. For the joy of seeing the next person pulled out of the icy water of death, brought to life, and restored to wholeness and joy.

Our churches have sometimes come to resemble ferries, just shuttling the comfortable back and forth across the river on the same predictable path. In reality, we are meant to be a fleet of powerful agents of rescue and restoration.

We are standing within the stream of a movement begun by John Wesley himself. In a season when the Church of England seemed to be heading toward icy waters, Wesley and the Methodists had the audacity to believe they could turn it back toward life. They dared to believe that it was prayer, Scripture, accountability, seeking justice, ending oppression, and serving the poor that would renew the Church.

Five Year Reunion. Even all these years later, The Miracle on the Hudson passengers continue to gather for regular reunions and celebrations. At their five year reunion, the passengers who gathered decided to do something different. They went back to the scene where it all happened. They gathered at the New York Waterway ferry terminal to shake the hands of the ferry boat captains who came to their rescue, those everyday heroes who left their course to rescue people perched precariously, clinging to each other– oddly enough in the shape of a cross – across the body of the plane and its wings.

This afternoon, when two United Methodist bishops lift a chalice in an invitation, a reminder of the Body of Christ, I invite you to take a look around at the Body of Christ standing next to you. These are not strangers. This is the Church. And it’s nothing short of a miracle.

We didn’t come here just to fellowship or to fight. We came here to be reminded that there is great power in what is behind us – and still more ahead of us. We’re standing together. Part of a movement. On a mission. Full of the hope of the cross, committed to each other no matter what the future may bring and we will not be sunk.