Responding to the Judicial Council Ruling 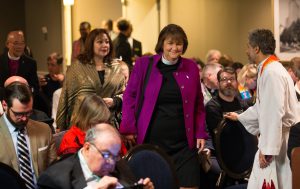 In April, Good News greeted with some dismay – as did many men and women in the pews – the Judicial Council’s convoluted and ultimately unsatisfactory ruling regarding the Western Jurisdictional Conference’s nomination, election, consecration, and assignment of Bishop Karen Oliveto, an openly gay bishop who is married to another woman, and one who has admitted to presiding at some 50 same-sex weddings.

In its dense, nineteen-page ruling the Council said many of the right things, but as so often is the case with the institutional church, it failed to take the necessary action. It left Oliveto in her office, and essentially remands the case to the Western Jurisdiction’s College of Bishops. And as United Methodists have come to realize, that jurisdiction has a solid track record of defying and even mocking the church’s polity and law when it comes to its sexual ethics and teachings on marriage. Because of past decisions and statements, we have little confidence the Western Jurisdiction bishops will properly handle a case where the facts are obvious to all. It is unlikely that a penalty commensurate to the breach will be meted out swiftly. 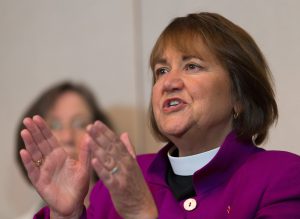 By allowing Oliveto’s election and assignment to stand, the decision has sown further confusion across the connection. Many rank-and-file United Methodists will conclude no branch of the church is actually willing to defend its biblically rooted, time-honored, and widely shared teachings on sexual practice and marriage. It will deepen the sense of malaise and reinforce the growing opinion that church leaders just continue to “kick the can down the road.” Concerned United Methodists will find it strange that we do not permit our clergy to conduct same-sex unions in our sanctuaries but that a bishop was consecrated after having performed dozens of them and is herself party to one.

Just before the magazine went to press, it was announced that the College of Bishops of the Western Jurisdiction is asking the Judicial Council to reconsider their decision. The Judicial Council is unlikely to reconsider, but this is a way for the process to be drawn out for another six months. The leadership of the jurisdiction will seek to draw out the process as long as they can, putting off that decision by as many as a year to 18 months. Delay tactics in themselves are sending the message that the Western Jurisdiction wants to play by its own rules, unconnected from the rest of the church. But the time clock on the complaint process will run out long before the special General Conference in February 2019.

Despite this frank assessment we remain convinced we have very good reasons to remain hopeful for the people called Methodists.

First, the Judicial Council’s decision has clarified things for the Commission on a Way Forward. If the Western Jurisdiction (and other jurisdictions and annual conferences) persists in defiance, it will make it clear that those actions have placed The United Methodist Church in schism and that it is no longer possible for us to live together in one body. It then becomes incumbent upon the commission to devise a plan of separation that is as fair and equitable as possible. If we can no longer go forward as a church united by its teachings and polity, then we must plan to go our separate ways. A new structure will allow conservative, orthodox, and evangelical congregations to give their full focus to proclaiming the Gospel and growing the kingdom of God through innovative and entrepreneurial forms of ministry for the 21st century.

Second, the Judicial Council clearly and forcefully upheld the principle that a jurisdiction’s bishops, acting on behalf of the whole United Methodist Church, cannot legally consecrate as bishop a person who does not meet the qualifications for office. The Western Jurisdiction had maintained that it could elect and consecrate whoever it thought would be an appropriate bishop in light of their particular context, and that the rest of the church could say nothing about their choice. The ruling recognized that bishops are bishops of the whole church and that jurisdictional bishops are acting on behalf of the whole church when they consecrate a bishop. No jurisdiction or annual conference is completely autonomous. We are part of a connection that is responsible and accountable to each other. 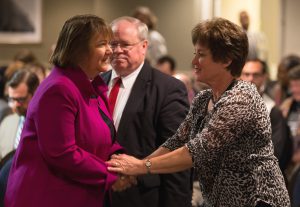 Bishop Karen Oliveto (left) and Dixie Brewster (right) meet at the April Judicial Council meeting. Brewster is the petitioner
questioning whether a gay pastor can serve as a bishop in the UM Church. Photo by Mike DuBose, UMNS

Third, the Judicial Council clarified that “a same-sex marriage license issued by competent civil authorities together with the clergy person’s status in a same-sex relationship is a public declaration that the person is a self-avowed practicing homosexual.” This important ruling will put an end to games that some openly homosexual clergy have been playing by living in a same-sex marriage, yet declining to acknowledge that they are practicing homosexuals. Rather than requiring church authorities to ask intrusive questions about the personal lives and practices of clergy, all that is now necessary for a person to be brought up on a complaint is the public record of being in a same-sex marriage.

“This ruling really does nothing to resolve the tension and impatience and anxiety in our system. It’s not clear-cut enough,” Bishop Bruce R. Ough, president of the United Methodist Church’s Council of Bishops, told the New York Times. “One of the tensions that will play out now within our denomination in the next few months is people will be watching carefully whether the Western Jurisdiction College of Bishops will in fact follow through and do the due process, and do it well.”

As expected, the Judicial Council decision did not resolve the impasse in our denomination over the role of LGBTQ+ persons in the life of the church. The only bodies with the authority to resolve the impasse are the Commission on a Way Forward, the Council of Bishops, and the special General Conference.

The Commission’s final plan is expected to go to the Council of Bishops for approval in May 2018. The Council of Bishops then needs to submit it in legislative form by July 2018 in order to meet the deadlines for the February 2019 General Conference. So we will know a year from now the final proposal that will be put before the called General Conference. Until then, we encourage United Methodists to remain in prayer and continue as members of their local churches, so that the evangelical voice is undiminished in helping to form whatever comes next.

We remain steadfastly confident in the power of the Gospel revealed to us in Scripture. It transforms us, empowers us, and enables us to rise above seemingly insurmountable obstacles.