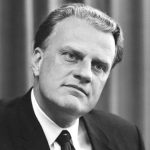 As he sat in the front across from us, you would never have known he was in pain. For he not only took the time to answer all of our questions, he had questions for us as well, wanting to know how we were doing in the school which he had helped to start. And then, after sharing a quiet but fervent prayer, “in Jesus’ name,” of course, he quietly went out, got into an ambulance, and was taken to the hospital for a severe bout of phlebitis, never having said a word about his own discomfort to anyone. For it was never about him, just the One whom he so ably represented.

He was well known, of course, for speaking to far larger crowds than those of us in a seminary lecture hall. Likewise, he gave counsel to presidents and prime ministers, queens and countless celebrities, preaching to some 200 million folks around the globe across his long career. Some called him the Protestant Pope and others said he was “America’s Pastor” but he was clearly a gift to the entire world. We called him “Dr. Graham,” but he just introduced himself as “Billy,” for though he may have been a spiritual father to many, he made it clear that he was simply our brother in Christ.

When news of his passing came today, thus, I found myself– like millions — feeling the genuine loss of a man who not only modeled ministry to me, but helped to form my own understanding of what it means to be a Christian man. For through it all, his message never really changed, focused on the sinfulness of man, the necessity of conversion, and the anticipated wonders of heaven for all who believe in Christ one day.

Likewise, Dr. Graham himself changed very little, despite reaching the vaulted age of 99. He never made any plans for retirement, though he conceded that God might have done so for him. And he slowed down only when his infirmities compelled him to do so. Parkinson’s Disease, along with the death of his beloved wife of 64 years, Ruth, made the last decade of his life a quieter one, however, and for the last several years, he spent most of his days at his North Carolina home.

But his legacy lives on, not simply in their five children (all of whom are in Christian ministry) and 19 grandchildren, but in the literally millions who came to faith after listening to “the young man with a burning message,” as he earlier was called. And the lessons he taught us in his visits to Gordon-Conwell Seminary live on in my life as well.

Heaven is a sweeter place today because of the homecoming of a remarkable man whose life demonstrated the power of those words. My life is better as well because of the work he did and the witness he made. And one day, I’ll get to shake his hand once more, assuming I can make my way through the crowd in heaven of all those who are there because of him.

Well done, sir, well done indeed. You will be missed by many.

C. Chappell Temple is lead pastor of Christ United Methodist Church in Sugar Land, Texas, a southwestern suburb of Houston. He holds degrees from SMU, Gordon-Conwell Theological Seminary, and Rice University, and is an adjunct faculty member in the Houston program of Perkins School of Theology, teaching United Methodist history, doctrine, and polity.  Reprinted by permission. The original post is found HERE.