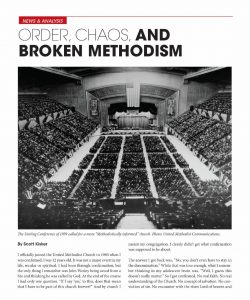 From the upcoming issue of Good News.

Dr. Scott Kisker, professor of the History of Christianity at United Theological Seminary, published an article recently in Firebrand Magazine that will also appear in the forthcoming edition of Good News magazine. In it, he explains two foundational disconnects that have contributed to the malaise of our church that is bringing us to the point of separation.

These disconnects have been much on the mind of those working to form a new traditionalist Methodist denomination.

One disconnect concerns the doctrine of the church. Through most of its history, the Methodist Church followed the Articles of Religion developed by John Wesley from the Anglican Thirty-Nine Articles and adopted by the 1784 Christmas Conference that began the Methodist Episcopal Church in the United States. Its final form was established in 1808. The Evangelical United Brethren Church adopted its own Confession of Faith in 1963. It was similar to the Articles of Religion, but also had some differences.

In addition to the Articles of Religion, the Methodist Church also embraced Wesley’s Standard Sermons and his Notes Upon the New Testament as doctrinal standards for the church. These were all protected by the First Restrictive Rule in our Constitution that provided, “General Conference shall not revoke, alter, or change our Articles of Religion or establish any new standards or rules of doctrine contrary to our present existing and established standards of doctrine” (Discipline, ¶ 17).

When The United Methodist Church formed in 1968 out of a merger of those two denominations, it ended up with two doctrinal statements. A commission was established to combine them into a new statement of faith for the new denomination.

Doctrinal standards are “not to be construed literally and juridically.” The words need not mean what they say, nor can anyone be held accountable to them. Although the doctrinal standards were still technically protected by the first Restrictive Rule, they were rendered impotent. Thus, the new UMC subverted the purpose of the first Restrictive Rule, while technically leaving it intact.

Methodists were to engage in “free inquiry within the boundaries defined by … scripture, tradition, reason, and experience.” Yet these “boundaries” cannot be “defined unambiguously” and should be interpreted with appropriate “flexibility.” As David F. Watson has written, with those caveats, why use the word “boundaries” at all?

Four years from birth of our denomination, along with the invention of the “Quadrilateral,” United Methodism adopted a vague unstable doctrinal position that drained the Articles of Religion and the Confession of Faith of any real meaning or authority.

As Dr. Billy Abraham has stated, United Methodism exchanged doctrinal standards for a theological method. Our method became an exploration of Scripture, Tradition, reason, and experience (the “Quadrilateral”), with no practical boundaries. Built into the DNA of United Methodism was a disconnect from our historic doctrines and beliefs. United Methodists could believe nearly anything and still be in good standing in the church.

Kisker does a masterful job of explaining our “connectional” church polity or governance. It consists of a series of interlocking “conferences” that were connected to one another in discernment and accountability.

Originally, the smallest and most basic “conference” was the class meeting, a group of eight to twelve members overseen by a class leader. The purpose of class meetings was to “watch over one another in love,” to support and encourage each other and hold each other accountable in one’s growth toward Christian spiritual maturity.

Representatives of each annual conference were elected to serve as delegates to General Conference, which represented the global Methodist Church. As Kisker puts it, “At General Conference, Methodists believed, God’s Spirit oversaw the general church as we conferred with one another, to ensure that catholic doctrine (universal across time and geography) and catholic discipline (universal across geography) were maintained for the sake of unity and witness in the world.”

This system broke down in the 1939 merger that brought back together the northern and southern Methodist Churches that had divided prior to the Civil War, as well as the Methodist Protestant Church. The 1939 merger invented a new layer of conference — the jurisdictional conference. The jurisdiction replaced the General Conference as the body that elected, consecrated, and sent bishops to oversee the annual conferences.

The motives for creating jurisdictions were to maintain racial segregation and regional distinctives. A “central jurisdiction” was created for all the black congregations and pastors in the U.S. That way, whites and African Americans would not need to be part of the same conference, and black pastors would not be appointed to serve white churches. United Methodism is still trying to overcome this nearly fatal accommodation to secular standards. At the same time, five regional jurisdictions were created (northeastern, north central, southeastern, south central, and western) to preserve the regional character of each part of the U.S. Thus the seeds for division were sown 80 years ago.

The addition of jurisdictions disconnected the chain of accountability from the General Conference. The General Conference could enact policies and church laws, but eventually could no longer enforce them because it did not elect or assign the primary executive officers of the annual conferences (the bishops).

At the other end of the spectrum, there was also a disconnect because by the end of the 1800’s, the class meeting had been replaced by the Sunday school. The emphasis shifted from “watching over one another in love” as members moved toward spiritual maturity, to gaining knowledge through learning from teachers. Unfortunately, this knowledge did not always lead to spiritual growth, and individual accountability was lost.

The local church was judged by the number of members it had, not the number of true disciples of Jesus Christ who lived out their faith. This new metric seemed to work during the 20th century when people valued membership in the church as a form of belonging. Beginning in the 1970s, however, membership was no longer as great a value, and church membership began its long and unbroken decline. Absent personal accountability and mutual encouragement, many United Methodists remained spiritually immature, their lives not necessarily reflecting the power of a Spirit-led, Christ-imitating character. The power of God to use Methodism to transform society was lost.

Those working to form a new Methodist denomination are eager to rectify these major disconnections in order to help restore the vitality of the original Methodist connectionalism.

Leaders propose a renewed emphasis on accountable discipleship, as opposed to membership. Church members will be strongly encouraged to participate in small groups that would help them grow in their faith, not just in understanding, but in actually living out what we believe in loving God with our whole being and loving our neighbor as ourselves in very practical ways.

Bishops are proposed to be held accountable globally, not regionally. The same standards would pertain, whether one was a Methodist in Kansas, New York, Alabama, Bulgaria, the Philippines, or Liberia. Our global Methodist identity would be recognizable and consistent from place to place, while still celebrating the various ethnic, racial, language, and cultural diversities within a global church. There is even some thought about returning the election of bishops to the General Conference, rather than a regional conference.

Of course, all of these visions and aspirations are subject to the decisions made at a convening General Conference of a new denomination. But they represent the hopes and dreams of those who are leading toward a new, faithful expression of Methodism.

For the new Methodism to be vital and fruitful, it is imperative to restore the connection between doctrine and life, between authority and accountability. Connectionalism is not just a system for collecting apportionments or supporting mission work. It is at the very core of who we are as Methodists. Restoring the connection will mean a change in the culture of our church that can lead us back to the future — a future informed by “the doctrine, spirit, and discipline with which [we] first set out” (Wesley’s Thoughts Upon Methodism). The Methodist connection was the channel the Holy Spirit used to make Methodism the largest and most vital church in America at one time. It can be so again, by the grace of God.