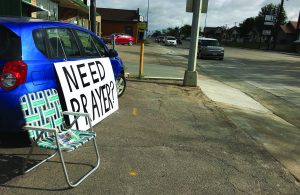 This summer I felt like I was supposed to pray for random people. Strangers.

Okay, God, what are you telling me to do? I wound up making a four-by-eight-foot sign with the words “Need prayer?” Then I put it in my car and drove to the busiest road in Sioux Falls. I set the sign against the side of my car and sat on a lawn chair beside it. I couldn’t have felt more awkward. And for me, that’s saying a lot. I kept thinking, There is no way people are going to stop. But they did.

A college girl stopped on her way to school. “I’m running late for class, and it’s my final test of the semester. But when I saw the sign, I felt like I was supposed to stop. Can you pray for me?”

On another day, I was finishing up, putting the sign back in my car, when a vehicle stopped. A younger lady slowly stepped out. She gently walked over to me and said, “I have MS. A few weeks back, I fell, and since then I’ve needed to use a cane. It’s been difficult. But this morning when I woke up, I was able to walk without a cane again. I’m so thankful and excited. Right now I’m headed to see my doctor, but when I saw your sign, I felt like I needed to stop. I just want to pray and thank God that I can walk today wlthout a cane.” Little did she know how much she encouraged me.

Sitting on the side of the road with a sign felt awkward, yet I’m glad I did it. It encouraged me, and I hope it encouraged others.

Throughout a “normal” day, I often pray for people sporadically. Sometimes it’s for a stranger I cross paths with at Target or a person who randomly comes to mind on my way to work or before calling it a night. It’s a gift to pray for those people and ask God that they have a week filled with joy, that they grow in their walk with the Lord, or that they come to know God’s purpose for their lives.

Some folks keep a list of names. Others pray as God reminds them of people throughout the day. I often write a person’s name down in my Bible. It reminds me to pray for that person, either for a specific need or just because.

Sometimes I pray for strength for a friend battling cancer.

A few months back, a staff person of Embrace, a young mom who had become well known and well loved by many people within our church, received some of the most difficult news imaginable. After a few weeks of having a cold that wouldn’t go away, the doctors believed it might be a case of pneumonia. They found something much worse. Stage 4 lung cancer. Bomb dropped. I’ve never seen an entire church so shell-shocked. I’ve also never seen a family more surrounded, loved, and lifted up in prayer. People wanted to help, wanted to support her, wanted to cheer her on, and they did. But more than that, people began to pray. Among other things, a nonstop chain of prayer began that continues today. There are hundreds, if not thousands, of people consistently and faithfully praying for Shannon; her husband, Dave; and the kids.

When I first spoke with Shannon after the diagnosis, she shared about one of her first PET scans. Forty minutes of lying completely still, not being able to move, while holding her arms above her head. It was extremely uncomfortable for Shannon due to the cancer. She tried so hard not to cough, even though her lungs were irritated. This is what she later shared:

“As I was lying there, a peace came over me that I couldn’t explain. I couldn’t help but think about all of the people from all over the country who were praying for me at that exact moment. I was overwhelmed in the best way possible and was reminded that I wasn’t alone. God and his people were with me and for me, cheering me on. We all have hard stuff that we face, and this was mine. But I wasn’t alone. The calls, texts, e-mails, and words of people praying reminded me of this.”

Here’s one very practical piece of advice about praying for others: if you tell someone you’re going to pray for him or her, do it! For years, I struggled with the bad habit of telling people I would pray for them but never getting around to doing so. I would simply forget. So often “I’ll pray for you” is something we say when we don’t know what else to say. It’s something we e-mail people. Something we write in sympathy cards. We type it as a comment on a friend’s Facebook post. We’re quick to say it but struggle to follow through on it.

I didn’t want my words to be hollow, so I made a simple change. Now if I tell someone I am going to pray for him or her, I ask if I can pray right then and there, or else I silently pray as we part ways. There are other ways to act on this. My wife will often set a daily reminder on her phone to pray for a certain person at a specific time so she doesn’t forget.

It might feel strange at first, to pray for someone audibly, but it’s amazing the impact our words have when talking with God on someone else’s behalf.

Encourage. Comfort. Strengthen. Cheer. Pray for one another.

Adam Weber is the founder and lead pastor of Embrace, a United Methodist congregation with six campuses around Sioux Falls, South Dakota. He is the author of Talking With God: What to Say When You Don’t Know How to Pray (Waterbrook). This article is excerpted by permission from that book.