Our God of Deliverance 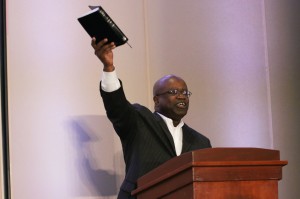 When I was asked by members of my congregation what I expected to occur at the Wesleyan Covenant Association gathering in Chicago, I told them that I expected God to show up and do something with us that we could not have imagined or dreamed of or hoped for. We are given the opportunity to let people know that the God of Abraham, Isaac, and Jacob still walks the earth. And to let the world know that the God who’s able to go down to Egypt and bring people out of bondage is still the same God who’s ready to redeem, and restore, and renew every life, every situation.

I’m not a genetic Methodist. I don’t have any preachers in the family, I’m not a cradle Methodist. I was raised in a little Baptist Church in Northern Louisiana where there was not a single African American Methodist church in town. But in that Sunday school class at Ebenezer Missionary Baptist Church, those ladies told me that God created the heavens and the earth. They didn’t have the language but they told me that the whole world was in God’s hands and that he loved all people.

It didn’t matter whether you were red, yellow, black, or white but that God loved everybody and that God had a plan for our lives. It was there that those ladies in Sunday school told me that not only did God create everything but that he is a delivering God. They told me that he delivered Noah from the flood, that he delivered the children Israel from their bondage, and that God will deliver us from our sin. I was taught that God would deliver me from that thing that gets on the inside of me, that makes me want to do what I know God had not called me to do, to live in ways that are not pleasing, and that the only way to be delivered was to trust in God.

One day I was playing street football in the Fifth Ward in Houston and a 1977 green Lincoln Continental stopped where we were playing and the window rolled down. A woman said, “We’re having vacation Bible school at the church around the corner. I want you boys to come.” She came back the next day and said, “It starts tonight, are you coming?”

I went to Brooks Chapel United Methodist Church and I never left because those people believed Jesus was Lord of everything. They believed that the word of God was true, not only for them but for the entire world, for all places and all times.

Who is your God? Let me call your attention to Exodus 20 because when we really get down to it, our current circumstance is really about “who is your God?” Oh we can dress it up and all sound theological and epistemological, but when you get right down to it, it’s about who is your God and will you have “any other gods before me.” God says to the children of Israel, “I am the Lord your God. I want you to know who I am.” It’s the same question Moses asks: “Who will I tell them is sending me when I go down to have a meeting with Pharaoh?” God says, “Tell him that I Am that I Am, that ought to be enough. And if he won’t let you go I’ll visit him about ten times and on the tenth time he’ll know what I Am means.”

I’m talking about a God who declares himself to be everything that we need, in every generation, and every circumstance. This is the same God who Jesus says, “before Abraham was, I am.” There is no other name given to men under heaven by which you can be saved. There’s just one name and his name is Jesus and he is the living, true God.

Everybody wants to be saved. If you’re drowning, it doesn’t matter to you who throws the rope in. If I’m drowning, I don’t care if the Grand Wizard of the Ku Klux Klan throws that rope in. I grab the rope until I get to the dry land. But when I get there, I say, “I can’t follow you Mr. Wizard.”

What is really our issue is that we’ve set up a multiplicity of gods because our humanity is prone to setting up our own god. In the third chapter of Genesis, God has spent time with Adam and Eve and he has told them his will for their lives and then the serpent shows up and says, “What did God tell you?” It’s not that we don’t know what God has said, it’s that we don’t agree with what God said. We don’t like what God has said. It doesn’t make us feel comfortable in our skin.

Let me say it another way: My personal experience does not align with what God’s word says, therefore, I’ll make my personal experience my god. The text says, “what did God say to you?” Well, God’s word says, “don’t touch the tree.” You’d think that would be enough. Just don’t touch the tree. But Satan says, “You know why God told you that? Because the moment you do, you will be like God. You will be your own god. You’ll be able to make your own decisions. You’ll be able to live independently of God.” So the question is whether or not we will have other gods besides the God revealed to us in the Holy Scripture.

I’m convinced that there is only one God. Anything else that calls for my allegiance or calls for my loyalty is a false god. Sometimes it doesn’t look like a false god, it looks nice. After all, it’s dressed up in love, mercy, and grace. It’s dripping with “community” and “relationship.”

Do not bow. In Daniel 3, Nebuchadnezzar sets up a 90 foot god, nine foot wide, and said, “Every time you hear the music, every time you hear the praise, I want you to bow down to this god because it’s just saying that you’re a part of the team, that you’re part of the culture in which you find yourself.” There were three boys – Shadrach, Meshach, and Abednego – and they wore the clothes of the culture, they even worked in the places of employment of the culture, but they couldn’t bow down to another god. It was as if they said, “I can work with you, I can barbeque with you, but I can’t bow down with you. I can’t bow down unless we’re talking about the true and living God.”

Shadrach, Meshach, and Abednego said, “King may you live forever, bless you and your mama and all your kinfolk, but I can’t bow down because there is no other God but the living God of Israel.” You remember the story. The king says, “How dare you stand up and tell me there’s another god? How dare you stand up and tell me there’s an absolute truth other than my truth? I’ll throw you in the fire.” They say, “King, we don’t know what our God will do, but I sure know what he can do. You can put me in the fire but my God can keep me.”

There are many false gods.

• Salvation without sacrifice. The idea that we’re saved and it’s a free gift of God and that we have no response to the salvation. Let me tell you, God takes my sin seriously. He died for my sin. He died because I’m a sinner and could not save myself. Salvation must be followed with a willingness to sacrifice for the one who saved you.

• Forgiveness without faithfulness. I’m alright, you’re alright, everybody’s okay. Let’s just get together in a circle and sing kumbaya, everybody feel good when they leave. Let me tell you, I need some forgiving. I know my sins. They are ever before me. I need to be forgiven by a God who says to me, “Kenneth, you are forgiven. Now will you live faithfully for me? Will you go out and proclaim that Jesus lives?”

God says, “I am the Lord your God who brought you out of Egypt, out of the house of slavery. You must have no other gods before me.” Now, I’m suspicious by nature. I don’t trust myself because I’ve found out that when I trust me, God always agrees with me. I’ve learned that I’m not trustworthy, that I have to keep turning back to the Word to lead me and guide me in my life and in my decisions.

Trust God. So finally, let me take you back to that little Sunday school class in Louisiana, in that little neighborhood. Here’s what I remember those mothers saying and I found it in Ecclesiastes 12: “Now everything has been heard. Here is the conclusion of the matter. Reverence God and keep his commandments.”

The same God who spoke in Exodus chapter 20 is the same God speaking in Chicago. I’m talking about a God who will make things happen if we’re willing to submit ourselves and say, “There is no other God, I will not bow down.”

Kenneth Levingston is the senior pastor of Jones Memorial United Methodist Church in Houston. He is the president of the Houston Area Black Methodists for Church Renewal and has represented the Texas Annual Conference as a delegate to the General Conference. This article is adapted from Rev. Levingston’s address at the Wesleyan Covenant Association gathering in Chicago on October 7, 2016.