New York Clergy Member Resigns from Board of Ordained Ministry

The Rev. Chuck Ferrara, until recently a member of the New York Annual Conference Board of Ordained Ministry, sent the following letter to Bishop Thomas Bickerton: 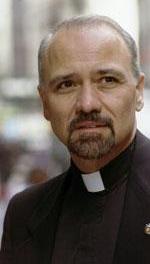 I know you are somewhat familiar with my background. But just in case you are not, I would like to point out two areas of my past that speak profoundly to my decision to resign from the board of ordained ministry. First, I was an Army Captain Special Forces ODA A-team commander. We were a small group of twelve who could be dropped anywhere in the world to ruin your day. It was ingrained in me to obey the chain of command and follow orders to the most minute detail (provided the order was lawful). Second, I am retired as an NYPD lieutenant who spent a career enforcing the laws; I didn’t bend them, I enforced them. I was honest, held my head high with integrity and was fair as I carried out my duties.

Now, for my present status. I have been an ordained member of the UMC for the past thirty years. I always served with integrity and garnered the respect and praises of my bishops, district superintendents and leadership in the various churches I have served. I cannot tolerate unlawful behavior, no matter how righteous it may appear.

The recent decision of the board of ordained ministry to thumb its nose at the recent Judicial Council ruling is nothing less than rebellion. I am not homophobic, and, in fact you can interview members of my present and former churches who will tell you that I never differentiated between straight and gay members. The theological question is for another discussion. However, to ignore the official position of the church, be indifferent about an official ruling and violating The Book of Discipline, which governs the order of our great church is the straw that broke this camel’s back.

When I played football, baseball, and basketball, I put on a uniform with pride and took the field. There were rules I had to abide by. Home plate was 17 inches, not 23. You didn’t widen the plate to satisfy a pitcher or hitter who could not abide by the rules. Our board has just widened the plate without the official approval of General Conference. This, in my opinion, is mutiny. I will have no part of that based on the aforementioned.

Sir, I will continue to serve my local church to the best of my God-given ability and work to make disciples of Jesus Christ. And I will also continue to serve on my district committee on ordained ministry where committee members have shown respect for our polity.

You have no idea how writing this email hurts me. I am a team player. The Airborne Corps had a slogan: “ALL THE WAY!” I am an all the way kind of guy, unless, however, the commander breaks the rules. The rules have been broken and I can no longer go all the way.

With the deepest respect and heavy heart, I resign from the New York Annual Conference Board of Ordained Ministry.