Jurisdictional leaders recommended electing 14 new bishops; however, the Northeastern Jurisdictional Conference voted to suspend its rules and delay the election of a second bishop until the 2024 jurisdictional conference.

The elections bring the number of active U.S. bishops to 39, but the U.S. currently has 46 episcopal areas. Twenty United Methodist bishops in the U.S. will have retired between 2021 and the end of this year.

Each jurisdiction’s college of bishops and committee on the episcopacy arrange coverage of the remaining episcopal areas, with some assigning bishops to serve more than one episcopal area as 16 bishops have done over the last two years with General Conference postponed by the pandemic. The Rev. Thomas M. Berlin, lead pastor of Floris United Methodist Church in Herndon, Virginia. He has been assigned to Florida.

Since 1997, he has been lead pastor of Floris United Methodist Church in suburban Washington. The congregation has grown from an average worship attendance of 400 when he began his appointment to 1,200 before the pandemic. Under Berlin’s leadership, the church also launched two satellite campuses: Restoration Reston and Restoration Loudon. The congregation’s combined online and in-person attendance is now around 1,000. The church also has been in partnership with the Sierra Leone Conference since 2000. The Rev. Robin Dease thanks the delegates of the Southeastern Jurisdictional Conference upon her election as a bishop. Photo by Matt Brodie.

The Rev. Robin Dease, a pastor and former district superintendent in the South Carolina Conference. She has been assigned to North Georgia.

Her appointment as senior pastor at St. Andrew By-The-Sea made her the first African-American woman to serve as lead pastor of a historically white United Methodist church in South Carolina. The Rev. Connie Shelton thanks the delegates of the Southeastern Jurisdictional Conference Her husband, the Rev. Joey Shelton, stands behind her. Photo by Ben Smith, UM News.

The Rev. Connie Mitchell Shelton, district superintendent in the Mississippi Conference. She has been assigned to North Carolina.

Raised in the Southern Baptist tradition in her native Mississippi, she later found that Methodist theology resonated in her life. She subsequently joined Oak Grove United Methodist Church in Hattiesburg, Mississippi, where she and her husband, Joey, served as volunteer lay youth directors. Eventually, both she and her husband discerned a call to full-time ordained ministry.

She has a bachelor’s degree in radio, television and film and a master’s in public relations, both from the University of Southern Mississippi. She and her husband moved to Durham, North Carolina, to study at Duke Divinity School.

Since 2015, she has been superintendent and missional strategist of the East Jackson District in the Mississippi Conference. Since July, she also has served on a team of four superintendents overseeing the Hattiesburg District.

She previously served as director of connectional ministries and communications for the Mississippi Conference. Before that, she served in appointments at both rural and urban United Methodist churches. She also was executive director of “The United Methodist Hour” television and radio broadcast, which reached across the Southeastern United States. The Rev. Kennetha Bigham-Tsai, chief connectional ministries officer for the Connectional Table. She has been assigned to Iowa.

As superintendent of the Lansing District of the Michigan Conference for five years, from 2013 to 2018. Ordained as a United Methodist elder in 2009, Bigham-Tsai served congregations in Portage and East Lansing, Michigan. 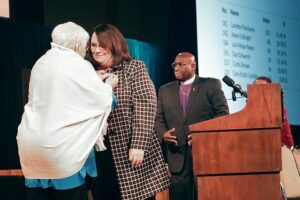 The Rev. Lanette Plambeck receives her episcopal pin following her election to at the North Central Jurisdictional Conference. Photo by Kaitlyn Winders Photography.

The Rev. Lanette Plambeck, assistant to the bishop and director of clergy and leadership excellence in the Iowa Conference. She has been assigned to Dakotas-Minnesota.

Ordained an elder in the Iowa Conference in 2005, Plambeck earned her B.A. from Morningside University in religious studies and political science. After serving as an intelligence analyst in the Army, she worked as an executive and therapist for person-centered agencies. In 2001 she completed her master of divinity degree with an emphasis on evangelism at Saint Paul School of Theology in Kansas City, then received a doctor of ministry in church leadership excellence in 2013 from Wesley Theological Seminary. 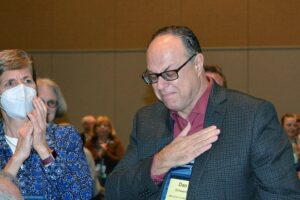 The Rev. Dan Schwerin reacts to being elected bishop Nov. 3 at the North Central Jurisdictional Conference. Photo by Lisa Wink.

The Rev. Dan Schwerin, assistant to the bishop for the Wisconsin Conference. He has been assigned to North Illinois.

Schwerin has enjoyed many contexts for pastoral ministry, including urban and rural churches; a new church plant; and a multi-staff downtown setting that became a Reconciling Congregation. He launched non-profits to benefit persons with disabilities, children dealing with grief, persons wanting to help battle generational poverty, and children who desired instruments and music lessons.

In the Wisconsin Conference, he served as the superintendent of two districts. Bishop Jung selected Schwerin to lead a collaborative effort with conference partners to increase racial justice and radical inclusion. The Rev. Héctor A. Burgos-Núñez addresses the Northeastern Jurisdictional Conference after being elected bishop. His wife, Jazelis Burgos, is at his side. Photo by the Rev. Thomas Kim, UM News.

The Rev. Héctor A. Burgos-Núñez, the superintendent of the Central District in the Greater New Jersey Conference. He has been assigned to Upper New York.

With his election, he became the first Hispanic/Latino bishop elected in the Northeastern Jurisdiction. Burgos was the endorsed candidate of MARCHA, the Hispanic/Latino caucus of The United Methodist Church.

Burgos has served as superintendent of the Central District since 2019. Prior to that, he served as director of connectional ministries from 2015 to 2019. The Rev. Carlo A. Rapanut greets delegates at the United Methodist Western Jurisdictional Conference, after he was elected to the episcopacy. Photo by Patrick Scriven of the Pacific Northwest Conference.

The Rev. Carlo A. Rapanut, assistant to the bishop in the Greater Northwest Episcopal Area. He has been assigned to Desert Southwest.

Rapanut is an elder in the Pacific Northwest Conference.

Since 2014 until May this year, he served as co-dean of the Greater Northwest Area bishop’s cabinet and conference superintendent of the Alaska United Methodist Conference. He also was the Alaska Conference’s director of connectional ministries from 2014 until becoming assistant to the bishop. He previously served as pastor of United Methodist Church of Chugiak in Chugiak, Alaska.

Rapanut grew up in Baguio City, Philippines. Before moving to the U.S., he was senior pastor of Baguio City First United Methodist Church and later assistant to now-retired Bishop Benjamin A. Justo. The Rev. Cedrick Bridgeforth addresses the delegates, guests and his new episcopal colleagues, shortly after his election. His husband, Christopher Hucks-Ortiz, stands at his side. Photo by Patrick Scriven of the Pacific Northwest Conference .

The Rev. Cedrick D. Bridgeforth, director of innovation and communication in the California-Pacific Conference. He has been assigned to Greater Northwest.

Bridgeforth becomes the first openly gay African-American man to be elected a bishop in The United Methodist Church.

An elder in the California-Pacific Conference, he has directed its office of innovation and communications since 2021. He previously has served as lead pastor of Grace United Methodist Church, a historically Black congregation in Los Angeles, and before that as lead pastor of Santa Ana United Methodist Church, a multi-ethnic congregation. During that time, he was also director of academic programs and outreach for the Ecumenical Center for Black Church Studies at the University of La Verne.

He also served as a district superintendent in the California-Pacific Conference from 2008 to 2015 and cabinet dean from 2011 to 2015.

Bridgeforth has written books on leadership and prayer. In 2021, he published his memoir, “Alabama Grandson: A Black, Gay Minister’s Passage Out of Hiding.”

A native of Decatur, Alabama, Bridgeforth is a U.S. Air Force veteran. The Rev. Dottie Escobedo-Frank, a United Methodist elder in the Desert Southwest Conference, is accompanied to the podium by young people from MARCHA West, honoring her roots in the Hispanic/Latino community. Photo by Patrick Scriven of the Pacific Northwest Conference.

The Rev. Dottie Escobedo-Frank, senior pastor of Paradise Valley United Methodist Church in Paradise Valley, Arizona. She has been assigned to California-Pacific.

Escobedo-Frank will be the Western jurisdiction’s third Hispanic bishop,

Escobedo-Frank, an elder in the Desert Southwest Conference, she has served appointments as pastor to churches ranging from the small and rural to the big and urban. For three years, she also was an associate pastor at an Evangelical Lutheran Church in America megachurch in Glendale, Arizona.

She also has experience as a district superintendent based in Tucson and dean of the bishop’s cabinet. She served twice as Hispanic Ministries chair in the Desert Southwest Conference.

She also is a prolific writer, publishing seven books about church life and church seasons with Abingdon Press, an imprint of the United Methodist Publishing House. 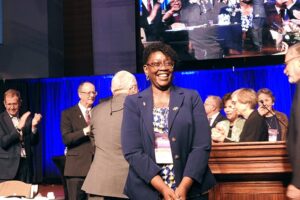 The Rev. Delores “Dee” Williamston, director of clergy excellence and assistant to the bishop of the Great Plains Conference. She has been assigned to Louisiana.

Williamston is the first Black female bishop for the South Central Jurisdiction. She has been assistant to the bishop and director of clergy excellence at the Great Plains Conference since 2021. Prior to that, she spent seven years as a district superintendent in the Great Plains.

She has a bachelor of science in management and Christian ethics from Manhattan Christian College; a master of divinity from Saint Paul School of Theology, with a specialization in evangelism and Black church studies; and is scheduled to receive a doctor of ministry degree in transformational leadership in improvisational ministry from Phillips Theological Seminary in May 2023.

Williamston is a 22-year veteran of the Kansas Army National Guard, rising to sergeant first class, and has also worked for the U.S. Property and Fiscal Office, State of Kansas food stamp department, American Federation for Television and Radio Artists, and a New York law firm. The Rev. David Wilson, assistant to the bishop of the Oklahoma and Oklahoma Indian Missionary Conference. He has been assigned to Great Plains.

Wilson has been the assistant to the bishop for the Oklahoma Indian Missionary Conference since 2021, following 19 years as a conference superintendent. He was lead coordinator for the North Oklahoma City Native American Ministry for eight years, following eight years as a pastor of a church in Norman, Oklahoma. He served seven years as director of promotions/interpretations for the Oklahoma Indian Missionary Conference, after being pastor of a church in Tahlequah, Oklahoma, and campus minister for the Native American Campus Ministry program at Northeastern State University.

He received an undergraduate degree in mass communications from Oklahoma City University, a master’s degree in divinity from Phillips Theological Seminary in Tulsa, Oklahoma, and an honorary doctorate in humane letters from Bacone College in Muskogee, Oklahoma. 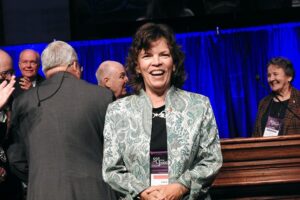 The Rev. Laura Merrill, Central District superintendent for the Rio Texas Conference. She has been assigned to Arkansas.

Merrill also served as a missionary in Chile for the Desert Southwest Conference.

She received a bachelor’s degree in international studies from Southwestern University in 1984, and a master’s in divinity from Candler in 1995.

A third-generation United Methodist pastor, she has two children.

Here are the assignments, by conference.

*New England: A new servant leadership coverage model will be revealed later, covered by the college of bishops.

*Schnase will provide coverage for the New Mexico Conference and Nunn for the Northwest Texas Conference, as they have been doing.

Fit for a Queen