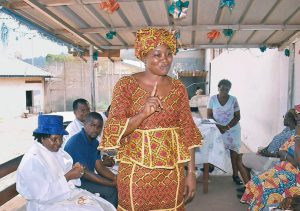 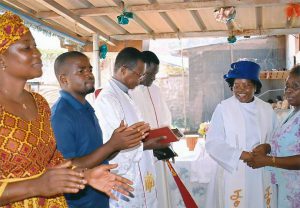 Encouraged by regional missionary Finda Quiwa to “keep the faith, fight the good fight, and continue to trust in God,” seven inmates of the Freetown Female Correctional Center were baptized and confirmed in The United Methodist Church. The women led choruses — a practice now very popular among them — before the Rev. Daisy Gbloh conducted the November baptism and confirmation service. (The correction center is located in Freetown, the capital and largest city of the west African nation of Sierra Leone. There are 225,000 United Methodists in Sierra Leone.)

Quiwa called the occasion an historic event in the lives of the women and a day of joy for the prison ministry. She encouraged the inmates, “Never give up. Trust God, and things will change.” Over the years, volunteers have led devotions and Bible study, counseling sessions and skills training to help focus on the lives of the women after incarceration. 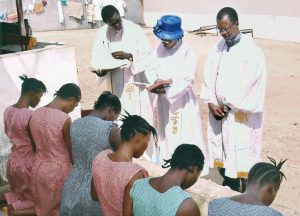 “The message of hope — that God can restore us, no matter what crime we have committed” — influenced their decision, she said. “We believe there is life after prison,” Quiwa declared. 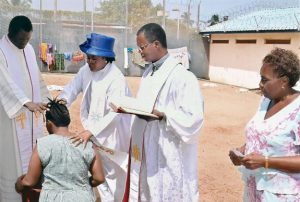 Often, released prisoners are shunned by society and lack skills that can make them self-reliant. “But with skills training, they can have a vocation to rely on to make life meaningful after detention,” she said. “We teach them simple things like floral and balloon decorations, tailoring, hall decoration, soap making, arts and crafts.”

The ministry is also involved in advocacy with government officials for the release of those with whom they work. “We thank God,” Quiwa added, “that most of them join The United Methodist Church after they are released.”

Recalling Jesus’ words, “When I was in prison, you visited me,” Quiwa said, “We give hope; we give courage to restore them so that they cannot return to the issues that caused them to go to jail in the first place. Sometimes, they have served in our churches as examples for people not to go into crime and to see that no matter how difficult this life can get, Christ has a way out.”

Sellu congratulated the women on the bold step to give their lives to Christ and become baptized. She asked them to continue to make amends, do what is right, and move forward in life. “There is nothing impossible with Christ,” Sellu continued. “One day, you will become free to serve the Lord.

“I really felt good and gratified that our ministry is making such a difference in the lives of prisoners,” Sellu said, adding that the high point was “when water was poured on their heads, the genuine tears that flowed freely down the cheeks of the converts and the commitment they made to serve the Lord at all times.”

One woman expressed “thanks and appreciations to God Almighty and the United Methodist prison ministry, the regional missionaries and volunteers for the courage, hope and love” shown them.

Phileas Jusu is director of communications for The United Methodist Church in Sierra Leone. Joe Edward Pormai, a volunteer who works in the United Methodist Women’s regional missionary office with Finda Quiwa, contributed to this story.