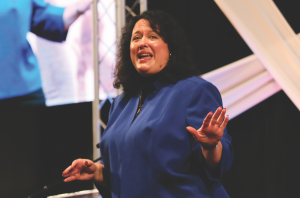 I am the woman at the well.

Don’t worry, I haven’t been married five times – but it would not have mattered to Jesus if I had been because his grace is just that messy.

My story is a bit messy. It didn’t start out that way. I was born and raised in a parsonage. I am a sixth generation pastor. I was a busy “super Pharisee.” I did all the right things, but with the wrong heart. I was proud. Oh, how I was proud.

That all came to an end on December 22, 1999.  My husband and I had been married nine years, we had a beautiful two year old little girl and I was pregnant with our second child. I felt as though life could not be much better.

Then my husband came in and sat down and explained that he no longer wanted the life we were living. He said that he loved me and our daughter, but that he was gay and wanted a divorce. A month later he moved out of our home. Mine was the first divorce on either side of my family.

We don’t know why the woman at the well was divorced so many times – if she left or if she was abandoned – but we do know she lived in the reality of what it meant to be a divorced woman in her time.

A false sense of shame settled into my soul. I no longer wanted to be seen by anyone from the church. I was literally driven to my knees by life, broken and full of shame – some I deserved, some I did not – and that is where Christ found me.

At my lowest point, Christ met me at a church that a friend pastored. It was filled with outcasts – divorced, gay, straight, rich, poor, agnostic, devout, black sheep – and even a Pharisee or two. This was not a progressive church or a conservative church. It was just a group of people seeking to be the church.

I would sit at the back of the sanctuary and just weep every Sunday for months. One day after communion, I bolted out the back door in tears – ugly crying. A wonderful woman came to check on me sitting on the church steps. I told her that I was just embarrassing myself crying so hard in the church – that I just needed to stop coming and realize there was no place for me in the church anymore.  She told me that she couldn’t think of a better place for me to cry than with family and she led me back into the sanctuary.

In that little church, I saw persons with all types of brokenness give up what they discovered to be unholy and unhealthy for their souls because they were accepted and loved into seeing Christ at work in their life. It was through the love of the congregation, the conviction of the Holy Spirit, and the messy grace of Jesus Christ that they were transformed.

Christ offered the woman at the well living water along with a dose of hard truth of her need for him. She was drenched in the “Living Water” as she encountered Christ in truth and messy grace.

I know what it is like to be drenched in that “living water.” I know firsthand how Christ takes away the pain caused by others, and the brokenness caused by my sin.

Some people have said I am a member of the Wesleyan Covenant Association because a gay man broke my heart. They couldn’t be more wrong. Twenty-eight years ago I pledged to love that man until the day I would die, and I have kept that promise – albeit differently than how I meant that day. At no time over the last 18 years have I stopped praying that God would give him a very blessed life.

Two years ago, I attended the WCA gathering in Chicago because I had a longing to be with people who believed in the power of Christ to not just make disciples, but to transform lives. I came a little skeptical, because I didn’t want to join something that was against anything. I wanted to be a part of a Christ-centered movement that truly loved people, a movement that made a place for people to encounter God no matter where they were on their journey, and create a space for them to fall in love with Christ – for them to receive the messy grace that was offered.

We are at a time in in our denomination where we have to decide if Jesus was a prophet and nice teacher that taught us how to love well or is Jesus the Messiah, the Savior of the World. Is Jesus the Christ, the promised one who takes away the sins of the world or is He simply a good person who is okay with leaving us in a “You’re Okay, I’m okay world,” when we know down deep in our soul that we are not okay.

Do we go on having the form of religion, without belief in the power of our Savior for salvation and transformation? While ministry is contextual – the way we reach people and the way we express the gospel – the Good News is not contextual!

Jesus Christ is our savior. He spoke hard truth to the woman at the well, but he covered it with messy grace. “Go and sin no more…”

We are not talking about banishing people who hurt us, whose lives don’t align perfectly with scripture. If that were the case could any of us be in the house of the Lord? We are talking about allowing Christ’s redeeming love to transform us – all of us, you and me.

The Rev. Dr. Leah Hidde-Gregory is the District Superintendent and Dean of the Cabinet of the Central Texas Annual Conference.