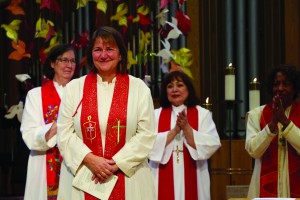 The first time she stood and faced a packed church as the newest bishop of the Western Jurisdiction, Karen Phyllis Oliveto was blessed with a resounding standing ovation. On July 16, the pews at Paradise Valley United Methodist Church in Scottsdale, Arizona, were filled with family, friends, and supporters who cheered and danced with her to the recessional hymn, “Somos el Cuerpo de Christo, We Are the Body of Christ.”

As the first out lesbian to be elected a bishop, she is not receiving the same affirmation from across the denomination. Her day started with a press conference where she and Greater Northwest Episcopal Area Bishop Grant Hagiya answered questions about what her election as bishop means, since the denomination forbids ordaining practicing, self-avowed homosexuals. Oliveto has been legally married to Robin Ridenour for more than two years, and they have been in a relationship since they met at a junior-high camp as counselors 17 years ago.

Hagiya said the election of Oliveto was led by the Holy Spirit. “We understand there may be some political implications, but in our mind this was the best person. It was not a question of (sexual) orientation, it was a question of who was the best spiritual leader. The body spoke and said ‘Yes, this is the one.’ ”

He added this election will not derail the General Conference 2016’s decision to support the Council of Bishops’ plan to appoint a special commission that would address all aspects of human sexuality currently covered in church law.

On the heels of her election, members of the South Central Jurisdiction voted 109-84 late on July 15 to ask the Judicial Council for a declaratory decision regarding gay and lesbian church leaders. The Judicial Council is the denomination’s supreme court.

What will happen with any challenge to the election, such as the South Central Jurisdiction’s appeal to the Judicial Council for a declaratory judgment, is unclear. “There are no precise precedents for the drama of this kind of thing where church law specifically says a person in this situation shall not be ordained or appointed and, suddenly, exactly the person described in church law is elected bishop,” said the Rev. William Lawrence, a Perkins School of Theology professor of church history and former president of the denomination’s Judicial Council.

Oliveto’s election might intensify tensions within the council, said Lawrence. “There will be members of the Council of Bishops, active bishops who have voice and vote, who find themselves in a position where their own theology and their own ecclesial leadership in the church would find Bishop Oliveto’s presence intolerable,” Lawrence said.

To Lawrence, Oliveto’s election “has changed the dynamic” and created a situation unlike any the denomination has faced. “I don’t think schism is inevitable but I think it is more likely now than it was yesterday,” Lawrence said.

Reactions across the connection

The Rev. Ed Tomlinson, pastor of Lanier United Methodist Church in the North Georgia Conference, said he is disappointed that the Western Jurisdiction did not wait to see what the bishops’ commission would do. “It seems they rushed to judgment without really caring whether all voices are heard or not,” said Tomlinson, a retired district superintendent and veteran General Conference delegate.

The Rev. Beth LaRocca-Pitts, a Southeastern Jurisdiction delegate, is the senior pastor of Atlanta’s Saint Mark United Methodist Church where a majority of members are LGBTQ individuals. LGBTQ stands for lesbian, gay, bisexual, transgender and queer. “We’re ecstatic (about Oliveto’s election),” she said. “It means a lot to that population that one of their number has been lifted up as a bishop of the church.” Oliveto’s election, she said, also means the voice of gay people will be represented in the work of the bishops’ commission.

The Rev. Frank Schaefer, a clergyman in the California-Pacific Conference who went through a church trial for officiating at the same-gender wedding of his son, said Oliveto’s election is good news for the LGBTQ community and strengthens the LGBTQ rights movement.

“It’s a seismic shift towards LGBTQ inclusion in The United Methodist Church!  It is bound to propel the dialogue within the church to a higher and more urgent level,” he said. He added he hoped this election will not be used as an excuse to force schism similar to what happened following the election of Episcopal Bishop Gene Robinson.

Many of the United Methodists in Africa will have serious problems with this decision, said the Rev. Jerry Kulah, dean of Gbarnga School of Theology, a United Methodist seminary in Liberia. “We are in prayers here in Africa as we trust God to continue to lead us on the ancient path (the holy, undiluted Word of God) Jeremiah 6:16. We shall not be moved. We will continue to remain obedient to the teaching of Scripture and loyal to Jesus Christ,” he said.

The Bible is the primary authority, supported by the United Methodist Book of Discipline, he said. “Those violating the Bible and Book of Discipline of the UMC are saying to the global UMC community that they are taking their exit and transferring their loyalty somewhere else,” Kulah said.

But the reaction at the Western Jurisdiction was a celebration.

“We just blew the socks off the denomination,” said Lynn Magnuson, laity from the Pacific Northwest Conference.

Wesley Hingano said, “It is a beautiful day.” His father, the Rev. Sisofina Hingano, was also a candidate for bishop. When Hingano withdrew his name from the ballot, he said he was doing it so people like his son could walk through the doors to freedom in the church. “I want to see gay and lesbian people walk freely,” he said.

Lonnie Brooks, Alaska Conference, said the election of Oliveto was the Western Jurisdiction declaring its independence from The United Methodist Church. “A lot of folks will look at it and think that is what they intend. What they haven’t given much thought to is that this will also cause a split in the West. We have some of the strongest red states here,” Brooks said, sounding a note of caution.

The Rev. Dottie Escobedo-Frank, who was a strong bishop candidate in the Western Jurisdiction, said during her withdrawal speech that the election of Oliveto was “a miracle we could not plan.”

“And I would like to say to my LGBTQ brothers and sisters, that as in this moment you are being included in an extreme way, do not forget what it’s like to be excluded to those who do not agree with you. Because if we don’t make a witness to the world to be loving of the whole body of Christ, then why in the heck are we here?” She said this was a moment to show the rest of the world the denomination does not have to split because of theology.