Mapping Out the Valley of the Shadow of Death 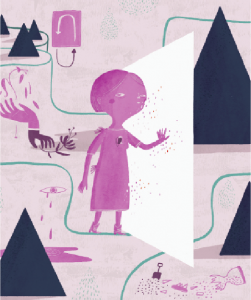 Laughing hard enough to shake dust from the rafters while reading a book about death feels a little sacrilegious, like stifling giggles at a funeral. It doesn’t seem proper. It doesn’t seem respectful.

But while funerals have nice social protocols and traditions for guiding times of grief, the time before the funeral doesn’t. There isn’t an order of worship for waiting on hold while wrestling with insurance companies over cancer treatment coverage; there isn’t a liturgy to follow when someone you know is going through grueling chemotherapy. Left to our own devices, our good intentions can stack up on someone like a sliding pile of Blue Cross statements. When we add blanket theological go-to sentiments, the result can be a 21st century replay of Job’s friends. But if we can’t, like the Man of Sorrows, allow ourselves to be “acquainted with grief” when others are suffering, how on earth will we learn to stare our own in the face when the time comes? And come it will.

By now, you may have seen, heard, or read an interview with Dr. Kate Bowler, a church history professor at Duke Divinity School. Long after her years growing up among Canadian Mennonites, recently she has been on The Today Show, NPR, and in the pages of the New York Times, in addition to countless conversations with faith-based publications. Kate is in her 30’s. She and her husband have a young child. A couple of years ago, she was (eventually) diagnosed with Stage IV cancer. Barring a miracle, she won’t get better: but she isn’t yet dead. She is a resident of the valley of the shadow of death. Kate lives two months at a time, from one scan to another. She notes that experts told her, “You have a thirty to fifty percent chance of survival.” By their definition, survival meant two years of life.

Bowler’s wry title – Everything Happens for a Reason: And Other Lies I’ve Loved – isn’t a frontal assault on the sovereignty of God. This isn’t a story of a Christian losing faith in hard times, either. Nor is it a denial of supernatural intervention. Rather, it signals what is coming: dark humor, brutal honesty, and faith in the midst of suffering. Bowler’s memoir is like sitting with a friend who has removed all her makeup and starkly answers your inquiry about her health by silently showing you her scars, burns, and lesions while mocking the absurdity of it all.

In a twist, Bowler’s pre-cancer dissertation also plumbed the subject of suffering – particularly, the prominence of the prosperity gospel – “a theodicy, an explanation for the problem of evil.” In other words, if God is all-good and all-powerful, why do bad things happen? Bowler studied prosperity preachers, attended church services where prosperity and blessings were promised. She sympathized with desperate people, struggling with poverty or illness, vulnerable to promises of overflowing health and bank accounts. But in a bittersweet turn, following her diagnosis, she came to a realization:

“I would love to report that what I found in the prosperity gospel was something so foreign and terrible to me that I was warned away. But what I discovered was both familiar and painfully sweet: the promise that I could curate my life, minimize my losses, and stand on my successes.” 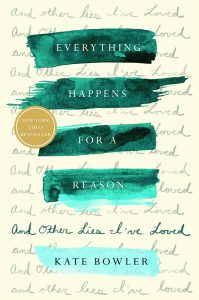 On top of her own implicit assumptions that God wanted her healthy and successful (and what Christian bookstore isn’t stocked with titles about finding your purpose and living into your calling?), she then encountered a similar prosperity theology among a multitude of North American Christians:

“The world of certainty had ended and so many people seemed to know why. Most of their explanations were reassurances that even this is a secret plan to improve me. ‘God has a better plan!’ ‘This is a test it will make you stronger!’ Sometimes these explanations were peppered with scriptures like ‘We know that for those who love God all things work together for good.’ Except that the author, Paul, worshipped God with every breath until his body was dumped in an unmarked grave.”

In a chapter simply called Surrender, Bowler slices like a skilled surgeon wielding a scalpel: “Control is a drug, and we are all hooked, whether or not we believe in the prosperity gospel’s assurance that we can master the future with our words and attitudes. I can barely admit to myself that I have almost no choice but to surrender. When will I realize that surrender is not weakness?”

What Bowler exposes when she cuts beneath the surface is the simple truth that the more things change, the more things stay the same.Cancer treatment has morphed tremendously over the past 100 years; human nature has not. We still catch ourselves saying, “God, who did something wrong, against your will – this man, or his parents, that he was born blind? Was it his theology? Did they not pray? Weren’t they using essential oils? Shouldn’t they have had a better job with better insurance? Did she eat organic while she was pregnant?”

And when Jesus was asked, “whose fault is this, Frank’s fault, or his parents’ fault? Why was this guy born blind?” Jesus responded – none of them did anything wrong. When the thief on the cross asked Jesus to remember him in his kingdom, Jesus didn’t send down an army of angels to save the thief’s life: no, the thief died that day. Conversion didn’t extend his life on earth so that he could go be a witness to the power of Christ, which would have made pretty great sense to me. When Jesus was born, dozens or hundreds of chubby little toddlers in the region were murdered; we don’t sing nativity songs about that, but human tragedy accompanied the birth of the Son of God.

Sometimes when we read the Gospels, we forget that Jesus didn’t blink. Jesus didn’t turn away, cover his nose to stifle stench, or hurry away. Jesus – Jesus leaned in. Whether he encountered people with disgusting, contagious skin diseases or shriveled legs or crusted-over eyes, he reached forward, and he touched. For Jesus, there was no stigma associated with suffering, mental illness, or disease. And if there is one way that the church in America has forgotten how to be like Jesus, it is this Mother Teresa-like response to physical suffering. Bowler probes discomfort with illness, suffering, and lack of control by asking:

“What would it mean for Christians to give up that little piece of the American Dream that says, ‘You are limitless’? Everything is not possible. The mighty Kingdom of God is not yet here. What if rich did not have to mean wealthy, and whole did not have to mean healed? What if being people of ‘the gospel’ meant that we are simply people with good news? God is here. We are loved. It is enough.”

In the end, Bowler eviscerates the malignant notion that Christians deserve to be happy, well, and prosperous (ideas that would have shocked early Christians and still surprise people of faith in other parts of the world); she sighs at verses lifted out of context and plastered on refrigerator magnets; and she relaxes into the great, costly gift of presence. This incarnational turn pivots our response of words to a response of action: we cannot always explain, but we can pick up groceries and deliver them. We (often) don’t have an answer, but we can sit and bear listening in silence to another’s unbearable grief. We may shake with fear at what could go wrong in our own lives, but we can, like Jesus, lean in and reach forward and affirm the beauty of the person in front of us.

Kate Bowler, author of Everything Happens for a Reason: And Other Lies I Have Loved. Photo courtesy of Random House.

Reading Bowler’s short but weighty volume repeatedly brought a precious Flannery O’Connor quote to mind: “faith is what we know to be true, whether we believe it or not.”

Anyone who has traveled the dark night of the soul is familiar with this truth. Day to day emotions or perspectives oscillate; faith is what remains in spite of ourselves – or well-meaning others. This kind of anchor is helpful to anyone facing the possible end of their lives, no matter the age, no matter the diagnosis, whether it’s a good day or a very, very bad one.

Kate is hiking the valley of the shadow of death, marking the trail with frank observations as she goes before many of us and lives in the in-between: no longer healthy, not yet on hospice, two months at a time. She is a guide to those near death, and to those still in denial about our fragile human mortality. She is a guide to those who simply drop off homemade cookies, and a guide to those so uncomfortable with sickness and uncertainty that they want to solve it instead of putting an arm around it. In this way, she has leaned in; she has reached out; she has not blinked.

Elizabeth Glass Turner is a frequent and beloved contributor to Good News. In addition to being a writer and speaker, she is Managing Editor of www.WesleyanAccent.com.