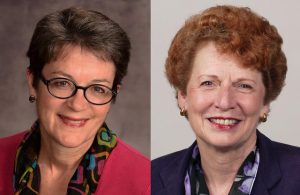 Two of the Judicial Council’s decisions reinforced the duty of annual conference boards of ordained ministry to determine that candidates for licensing, commissioning, and ordination all meet the requirements of the Book of Discipline, including the requirement for “celibacy in singleness and fidelity in a heterosexual marriage.”

In the run-up to General Conference 2016, at least six annual conference boards of ordained ministry (BoOM) issued statements saying that they would no longer consider sexual orientation when evaluating candidates for ministry. In two of those conferences, New York and Northern Illinois, persons raised questions of law aimed at overturning those BoOM policies. In both cases, the respective bishops ruled that the questions were “moot and hypothetical” and thus did not need to be ruled upon. Last fall, the Judicial Council disagreed and mandated that the bishops issue a ruling.

Bishop Jane Middleton of New York upheld the BoOM policy, stating that the BoOM is not required to ascertain whether a candidate meets the qualifications for candidacy and ordained ministry. Instead, the BoOM is to use “a process of examination, review, measurement and evaluation, not a process of ascertaining with certainty.” The bishop did acknowledge that “if a person being evaluated is known, by extrinsic evidence or self-admission, to be self-avowed practicing homosexual, they cannot be commissioned or ordained.”

Bishop Sally Dyck of Northern Illinois ruled the BoOM policy out of order, but qualified that ruling by stating that the BoOM “does not have the capacity to conduct an investigation leading them to be certain of anything; but in the exercise of their discernment and judgment, they can be satisfied as to the integrity of the answers to Disciplinary questions for ordination.”

In two strong and concise decisions, the Judicial Council modified both bishops’ rulings. In the New York decision [1343] the Council stated, “The Board is charged with identifying and recruiting ministerial leadership for our churches (¶ 624.h), required to examine all applicants as to their fitness for ordained ministry and make full inquiry into the fitness of the candidate.” “The prohibitive language of ¶ 304.3 [‘self-avowed practicing homosexuals are not to be certified as candidates, ordained as ministers, or appointed to serve in The United Methodist Church’] prevents a Board of Ordained Ministry from ignoring statements of self-disclosure about any action that violates any portion of church law as is the case for these persons who avowed their homosexuality.”

In the Northern Illinois decision [1344], the Council stated, “The Board of Ordained Ministry … is mandated by The Book of Discipline, 2012, to examine all applicants as to their fitness for the ordained ministry, and make full inquiry as to the fitness of the candidate … The Board’s examination must include all paragraphs relevant to election of pastoral ministry, including those provisions set forth in paragraphs that deal with issues of race, gender, sexuality, integrity, indebtedness, etc.” “This provision obviously aims to ensure that the Disciplinary standards are met. The duty of the Board is to conduct a careful and thorough examination and investigation, not only in terms of depth but also breadth of scope.” “The Board can only legally recommend to the Clergy Session a candidate for whom they have conducted a thorough examination and who has met the disciplinary standards for fitness.”

Based on these decisions, annual conference boards of ordained ministry cannot continue their “don’t ask, don’t tell” policies. Instead, they are required to ask questions about the candidates’ fitness for ministry, ensuring that they meet the standards set forth in the Discipline. Candidates who have not received a thorough examination cannot be legally recommended for commissioning or ordination.

Questions can legitimately be raised at upcoming Clergy Sessions about whether ministerial candidates have been properly examined. Some have suggested that approval by the Clergy Session can be temporarily postponed to allow the BoOM to carry out its full examination in order to verify that candidates meet the qualifications around sexuality. These Judicial Council decisions certainly mandate that a full and proper examination is required in order to legally recommend a candidate for commissioning or ordination.

The need for these decisions illustrates once again how broken our church has become. Bodies of the church that are placed in a position of trust are instead determined to act based on their own opinions rather than on behalf of the whole church. When they do so, trust is destroyed. How can members of the half-dozen annual conferences now ever trust that their boards of ordained ministry will carry out the mandates of the Discipline, given that they have previously declared their intent to disregard it? (The BoOM carries out its duties in closed sessions guarded by confidentiality.) Rebuilding that trust will be extremely difficult in our current conflict-ridden church environment. This loss of trust points out once again how important it is for the Commission on a Way Forward to come up with a plan that ensures accountability and rebuilds trust within the church.