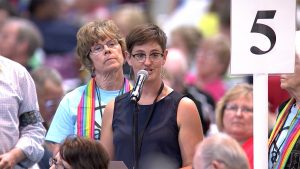 In a file photo from 2016, the Rev. Anna Blaedel speaks during the Iowa Annual Conference session. Photo by Arthur McClanahan, Iowa Conference.

The special-interest “centrist” caucus group known as “Mainstream UMC” is running a campaign to show that “harm” is being inflicted on LGBT persons in our United Methodist Church by our accountability process and to call for an end to trials. The campaign rings hollow when the whole story is told.

Part I of the campaign features the story of the Rev. Anna Blaedel, a partnered lesbian clergy in Iowa. Blaedel made a public statement from the microphone to the Iowa annual conference in 2016 and claimed to be a “self-avowed practicing homosexual” (in the terms of our Book of Discipline). The consequences of the activism are due primarily to the fact that Blaedel deliberately refuses to comply with the standards of our church, and secondarily that Blaedel sought public attention with the statement, inviting complaints to be filed. Reasonable observers do not consider this “harm.” Blaedel is experiencing a drawn-out complaint process because a previous bishop of Iowa failed in his responsibility of accountability, dismissing complaints against Blaedel without any justification. This is actually the course of action recommended by Mainstream UMC — drawing out the complaint process until after General Conference 2020 — and then Mainstream UMC turns around and blames the process for inflicting harm.

Part II of the campaign features the story of the Rev. David Meredith, a married gay clergy in Ohio. He is under charges for being a “self-avowed practicing homosexual” because he is married to another man. Again, Meredith sought out this attention. He and his partner were married in a public ceremony just three days before the 2016 General Conference began. The public version of his ceremony was not strictly necessary, as Meredith and his partner had been married earlier in a private ceremony. The media event was intended to raise the issue of same-sex marriage with the hope of influencing the General Conference to change its position.

The Mainstream UMC caucus is promoting a narrative that traditionalist United Methodists are on a witch hunt to “evict bishops, clergy, and entire annual conferences from the UMC.” If that were the case, there would be complaints being filed against hundreds of clergy across the U.S. who are either same-sex partnered or have performed same-sex weddings. Instead, there are currently less than half a dozen. And no trials have taken place since 2013. Those on the receiving end of complaints have generally been activists who brought public attention to their violation in an attempt to influence church opinion. Yet contrary to reality, Mainstream UMC repeatedly raises the specter of numerous trials in order to sow discord and heighten acrimonious division.

Rather than being harmed by our United Methodist system, those under complaints are actually harming our system through intentional, defiant, public disobedience. What matters to traditionalists is compliance with the stated policies of our church, affirmed repeatedly by General Conference over the past 47 years. All clergy promised to comply with the church’s Discipline when we were ordained. It is the failure to honor those vows that has put the church in an untenable position. Traditionalists have no desire for hundreds of trials. Rather, we were the only group pushing to include a gracious exit for local churches and annual conferences that could not abide by our Discipline. If some centrists and progressives want confrontation, we are prepared to stand firmly and faithfully by the principles and doctrines the church has held for 2,000 years. But we would much rather work together for a resolution of our conflict that all groups can support — one that respects those with whom we disagree while we are all freed to go our separate ways.

Another storyline that the Mainstream UMC group is promoting is that Good News hatched a nefarious conspiracy in 2004 to force the departure of LGBTQ persons and their allies from the church. This conspiracy theory is based on an internal Good News document, “Options for the Future,” that I had a hand in writing. (Mainstream calls it a “master plan” and quotes sentences out of context to portray the document as a guide for traditionalist strategy.) The document was written to help the Good News board think through its options after the 2004 General Conference, when the Rev. Bill Hinson publicly proposed allowing those unable to live within the boundaries of our Book of Discipline to depart from the denomination with our blessing. That proposal was rejected by General Conference delegates at the time, and Good News realized that it was likely that our United Methodist conflict would fester and worsen over the years to come.

“Options for the Future” was based on the influential book by Lyle Schaller, The Ice Cube Is Melting. In the book, Schaller laid out many options for the UM Church to consider in order to resolve both the conflict and the decline that besets the church. The paper attempted to flesh out various possibilities for how these options might happen. The paper considered at least six different options, including a “local option” or “One Church Plan” denomination, and named the pros and cons of each. Far from being a “blueprint for forced departure” of centrists and progressives, the paper merely examines different possibilities. It is amazing how prescient parts of the paper were in predicting how the conflict might develop.

Like many internal analysis papers, “Options for the Future” was put on a shelf and not referred to again after its discussion by our board. There was no conspiracy, nor did Good News commit to a plan to force centrists and progressives out of the church. On the contrary, for at least the last seven years, Good News has argued that a negotiated, fair, equitable separation was the better way forward for the church.

The Mainstream UMC caucus continues its overblown rhetoric when it says, “The leadership of the WCA has spent a generation harming LGBTQ persons.” Let us not forget that the WCA was officially launched in October 2016. It has become fashionable to blame or credit the WCA for everything that happens on the traditionalist end of the church, but the WCA is specifically focused on preparing for the next iteration of Methodism, either within the UM Church or separate from it, not on the political battles over increased accountability.

Mainstream UMC claims, “WCA President Keith Boyette penned the majority opinion in the infamous, anti-gay Judicial Council Decision 1032.” Opinions issued by the Judicial Council, however, are the product of the whole Judicial Council as all members inevitably have a hand in their composition. The Council does not release the name of the person who writes the first draft for the reason that all who concur with it take ownership in it. So Mainstream UMC has no credible way to state authorship of the decision.

Decision 1032 specifically held that the “Discipline invests discretion in the pastor-in-charge to make the determination of a person’s readiness to affirm the vows of membership.” Boyette did write a concurring opinion in Decision 1032 in which he observed that nothing in the opinion of the Judicial Council could “remotely be construed as making a sweeping declaration that … ‘homosexuals’ are barred from membership in the church.” Boyette’s concurring opinion further noted that the pastor’s discretion as to a person’s readiness to affirm membership vows was not unfettered, but was subject to review.

The more important point is that Mainstream UMC continues to call the upholding of biblical teaching as “discrimination against LGBT persons.” Upholding scriptural standards and the discernment of our General Conference over 47 years is not discrimination. The church is solidly within its historical tradition to require clergy to observe “celibacy in singleness or faithfulness in a heterosexual marriage.”

If Mainstream UMC wanted to stop the trials, Good News and the Renewal and Reform Coalition have proposed and supported mechanisms to do just that for years. Proposals for amicable separation and gracious exit were submitted to both the 2016 and 2019 General Conferences. These would have ended the conflict and ended the trials. But many centrists fought tooth and nail to oppose these proposals. If the 2020 General Conference approves a plan of separation similar to the Indianapolis Plan, the conflict and the trials would end immediately.

It is difficult enough for people with differing perspectives on these contentious issues to dialog with one another, to seek understanding, and to work out a mutually acceptable way forward. That task is made infinitely more difficult when advocates distort and mischaracterize their conversation partner’s perspective and demonize their opponent.

One gets the impression that such advocacy seeks to win at all costs, rather than follow a Christ-like path toward a fair resolution of the conflict. If that is the approach taken at the 2020 General Conference, we will only prolong a conflict that does the church no good and allows observers to cast the church as irrelevant and hypocritical. That approach does real harm to the cause of Christ and all who participate. We should work to do better.