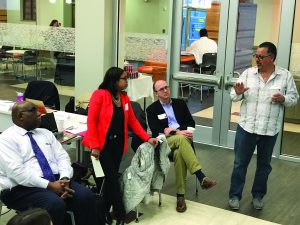 The 32 members of the Commission on a Way Forward are getting down to the business of doing what their name says — helping a denomination deeply divided over homosexuality move toward some sort of future together. That future could end up looking very different than how The United Methodist Church operates at present. The multinational commission held its third meeting April 6-8 in Washington. Just as was true with its first two meetings, the commission’s third gathering was closed to reporters.

“We’re acknowledging that there are deep-seated differences in the church, and there are parts of the church that are not able to live together in a close connection,” the Rev. Thomas Lambrecht said. “So we are looking at ways to loosen the connection. What form that might take, we don’t know yet.”

Matt Berryman agreed with Lambrecht’s assessment. “What we’re contemplating is loosening the connection in the face of conflict over whether there needs to be uniformity of practice and belief around LGBTQ people,” Berryman said.

Scott Johnson of Upper New York cautioned not to get too carried away with the idea of “loosening the connection.” “I think there is no question we still see a connected United Methodist church,” he said. “We’re working toward unity.”

The group brings together clergy and laity from nine countries and of diverse perspectives. At least three members, including Berryman, are openly gay. Still others, like Lambrecht, have long advocated for maintaining the bans on same-gender unions and “self-avowed practicing” gay clergy.

“We are trying to think about and model the new behaviors that will help leaders who deeply care about the church to see new forms and structures that will allow for differing expressions of the global church,” Florida Area Bishop Ken Carter, told UMNS. He is one of three bishops who is moderating the commission’s work.

The group is not only looking at a way through the impasse around homosexuality but also how to increase vitality of local churches and strengthen the church’s mission. According to a press release about the meeting, the commission members indicated they are leaning toward a simpler structure “with clearer processes for decision-making and accountability.”

The Rev. Tom Berlin, lead pastor of Floris United Methodist Church in Herndon, Virginia, said the commission still doesn’t know what “simpler” would look like. “We just have a sense that it’s a lot more complicated than it needs to be,” he said. “That’s why you are hearing people say, ‘simpler’ and ‘looser.’” Berlin added that in his experience, The United Methodist Church is “a denomination that likes the tension of different perspectives.”

Heather Hahn is a reporter for the United Methodist News Service. Vicki Brown, UMNS news editor, contributed to this report. This article was adapted from UM News Service.