Local UM Churches Respond to Harvey and Prepare for Irma 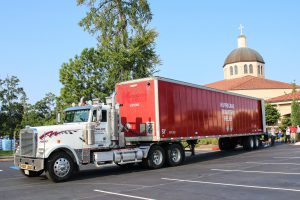 The Woodlands United Methodist Church is one of the official distribution centers for the relief efforts for victims of Hurricane Harvey. Photo by Steve Beard.

By Walter B. Fenton

Local United Methodist churches across the country have rushed to support people trying to get back on their feet after the devastation of Hurricane Harvey. And they are already preparing to assist those in the path of Hurricane Irma.

Along the western coast of the Gulf of Mexico, teams of United Methodists have assisted thousands of people in the depressing, but necessary task of quickly removing drywall, carpeting, furniture, and appliances from homes flooded by Harvey’s torrential rainfall. Across the region 40 inches of rain fell in just three to four days, and in some areas total rainfall topped 50 inches. Communities that never expected to flood found themselves surrounded by a foot or more of water.

“Our church and community wanted do whatever we could to support people impacted by the flooding,” said the Rev. Jeff Harper, lead pastor at Evangelical UM Church in Greenville, Ohio. “One of our church members owns an 18-wheeler truck and he volunteered to drive it to Texas if we would fill it with supplies. We’re in the process of filling it right now.”

Harper explained they did not know exactly where to send the truck, but his team eventually got in touch with the Rev. Dr. John Hull, pastor of missions at The Woodlands UM Church, just north of Houston. Hull is playing a leading role in coordinating local and national efforts to assist flood victims.

“We don’t always understand exactly why tragedies like this strike people,” Hull said, “but we want people to know God will walk with them as they go through these experiences. As a church we’re in this for the long haul, and it is always moving to see the gifts God has given us rise to the surface as we seek ways to help others.” 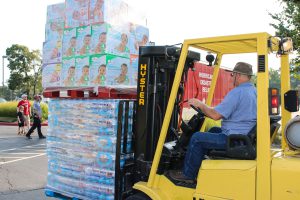 Marshall Perry, facilities engineer at The Woodlands United Methodist Church, unloads diapers and water to be distributed in the greater Houston area. Photo by Steve Beard.

in the area. During the storm, and in the days immediately following, the church’s gymnasium filled with cases of bottled water, food, cleaning supplies, diapers, clothes, and other items.

The Rev. Dr. Edmund Robb III, senior pastor of The Woodlands UM Church, reported that church members stocked its large gymnasium with relief supplies four times only to see it emptied it out four times in a matter of days. Church members have worked almost around the clock to assist people forced from their homes by the flood waters.

“Fortunately,” Robb said, “people continued to restock the gymnasium as quickly as it was emptied. The church will continue to serve as a distribution center for as long as local government officials ask us to do so. The response of the congregation has been tremendous.”

The United Methodist Committee on Relief (UMCOR) has organized an effective cleaning bucket campaign to channel local congregational involvement. (It has also been sending financial relief to respond to the severe flooding and mudslides in Sierra Leone – Advance #982450.)

The United Methodist News Service has published several articles in the past week detailing various ways United Methodists and their local congregations have responded to the storm that hit Texas and Louisiana.

When two members at Chapelwood UM Church in Houston realized the city’s 911 service was overwhelmed with calls, they created an app that helped police, fire departments, and volunteers quickly locate people who needed to be rescued.

Local churches quickly turned into shelters to house people driven from their homes.

And pastors prepared sermons to comfort people who face a long journey to recovery and to challenge others to help wherever they can.

United Methodists are now preparing to assist people in Florida as it braces for Hurricane Irma, one of the strongest storms on record to develop in the Atlantic.

Walter Fenton is a United Methodist clergyperson and an analyst at Good News.