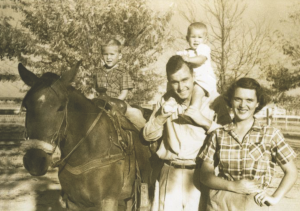 George and Barbara Bush with their children, George and Robin, at the rodeo grounds in Midland, Texas, October 1950. Courtesy of the George H.W. Bush Presidential Library and Museum.

It had been three hard days for George H.W. Bush, the 94-year-old former President of the United States. Lifelong friend James Baker, Mr. Bush’s secretary of state and chief of staff, went to check on his neighbor – a man he called “Jefe,” the Spanish word for “chief.”

“Mr. President, Secretary Baker’s here,” said one of the caregivers. Bush opened his eyes and looked at Baker and said, “Bake, where are we going today?”

Bush replied, “Good. That’s where I want to go.” A few hours later, a kinder and gentler man took his last breath.

That is the eloquent appeal from the Book of Common Prayer to be read at the time of death. A lifelong and devoted Episcopalian, Bush would have anticipated those words. He was, after all, raised from childhood on the scriptures and daily readings from the Prayer Book – an incalculable gift to Christendom from King Edward VI and Archbishop of Canterbury Thomas Cranmer in the 16th century.

“We all knelt around him and placed our hands on him and prayed for him and it was a very graceful, gentle death,” reported the Rev. Dr. Russell Levenson, Bush’s pastor at St. Martin’s Episcopal Church in Houston. “We were silent for a full long measure as this man who changed all of our lives, who changed our nation, who changed our world, left this life for the next.”

Once again, the Prayer Book intones: “Deliver your servant, George, O Sovereign Lord Christ, from all evil, and set him free from every bond; that he may rest with all your saints in the eternal habitations; where with the Father and the Holy Spirit you live and reign, one God, forever and ever.”

Bush’s friends in the Oak Ridge Boys sang “Amazing Grace” at his memorable funeral in Houston. Afterward, his body rode 90 miles on a specially commissioned Union Pacific railroad car, pulled by engine #4141, through Texas to his final resting place next to his wife Barbara and their daughter Robin who died at age three of leukemia.

Washington D.C. was my home during the Bush 41 administration and I still recall the stark radicalness of his call for a kinder and gentler way of doing things in our public square. “Abraham Lincoln’s ‘better angels of our nature’ and George H.W. Bush’s ‘thousand points of light’ are companion verses in America’s national hymn,” observed Bush biographer Jon Meacham in his eulogy. “Lincoln and Bush both called on us to choose the right over the convenient, to hope rather than to fear, and to heed not our worst impulses but our best instincts.”

Like many other grateful Americans who admired the grace, kindness, and compassion of the 41st President of the United States, I stood by the railroad tracks to pay my respects. The gorgeous iron horse rolled right past a legendary former saloon and brothel in Old Town Spring, right down the street from a bank rumored to have been robbed by Bonnie and Clyde in the 1930s. Every parking spot within a country mile was taken. American flags and homemade signs were displayed from the backs of pick-up trucks. Veterans saluted the former Commander in Chief and fighter pilot.

“Those who travel the high road of humility in Washington D.C. are not bothered by heavy traffic,” observed former Senator Alan Simpson in eulogizing President Bush. On this rainy day, the sky cleared up and the track was clear.

It was good to be reminded of Bush 41’s inaugural address: “We cannot hope only to leave our children a bigger car, a bigger bank account. We must hope to give them a sense of what it means to be a loyal friend, a loving parent, a citizen who leaves his home, his neighborhood and town better than he found it.

“What do we want the men and women who work with us to say when we are no longer there? That we were more driven to succeed than anyone around us, or that we stopped to ask if a sick child had gotten better, and stayed a moment, there, to trade a word of friendship.”

In the wake of his death, a list of life’s lessons learned by Bush is worth remembering. 1. Don’t get down when your life takes a bad turn. Out of adversity comes challenge and often success. 2. Don’t blame others for your setbacks. 3. When things go well, always give credit to others. 4. Don’t talk all the time. Listen to your friends and mentors and learn from them. 5. Don’t brag about yourself. Let others point out your virtues, your strong points. 6. Give someone else a hand. When a friend is hurting show that friend you care. 7. Nobody likes an overbearing big shot. 8. As you succeed, be kind to people. Thank those who help you along the way. 9. Don’t be afraid to shed a tear when your heart is broken because a friend is hurting. 10. Say your prayers!

One did not need to share his political leanings to marvel at his magnanimity and genteel demeanor. Those close to him testify to his overwhelming charm, curiosity, and decency.

At a Christmas concert nearly two decades ago, President Bush raised his hand to receive a packet during an appeal to become a personal sponsor for a foreign child in need. “I want one,” said Bush, recalled Wess Stafford, the president emeritus of Compassion International. Two weeks later, Bush began writing to a seven-year-old boy named Timothy in the Philippines.

Stafford knew the sponsorship had to be kept secret. “For his own security, this little boy must not know that his sponsor was the President of the United States,” recalled Stafford in a Facebook post. They used an alias (George Herbert) and carefully censored the letters so no clues were given. The former president encouraged the young boy to love and respect the people around him. Little Timothy and Bush even exchanged hand-drawn pictures.

It did not take long before Bush fudged the rules. It began, according to Stafford, with a picture of his dog: “This is my dog Millie … she knows many famous people!” Of course, the English Springer Spaniel had become world famous during his tenure at the White House with the Bush family.

Another big hint of his identity was shared with young Timothy when Bush (41) wrote during the administration of his son, President George W. Bush (43): “This year for Christmas we are going to celebrate with my son, at his house … he lives in a big White House!”

As leader of the free world, George H.W. Bush knew great triumph. He also knew tremendous heartbreak. He was shot out of the air in war and lost two crew mates in the process, survived the death of a child as a young father, and lost the presidency of the United States. His resilience and faith, however, tethered him to hope. “Be strong,” Bush wrote in his diary after his election defeat. “Be kind, be generous of spirit, be understanding, let people know how grateful you are, don’t get even, comfort the ones I’ve hurt and let down, say your prayers and ask for God’s understanding and strength, finish with a smile and with some gusto, do what’s right and finish strong.”

Fittingly, Bush’s pastor at St. Martin’s, called us to find inspiration in Bush’s virtues. “Some have said in the last few days, ‘this is the end of an era.’ But it doesn’t have to be,” Levenson said. “Perhaps it’s an invitation to fill the hole that has been left behind.”

At his passing, we gratefully return to the Book of Common Prayer: “Into your hands, O merciful Savior, we commend your servant George. Acknowledge, we humbly beseech you, a sheep of your own fold, a lamb of your own flock, a sinner of your own redeeming. Receive him into the arms of your mercy, into the blessed rest of everlasting peace, and into the glorious company of the saints in light.” Amen.