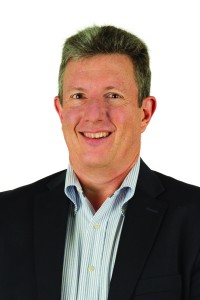 “But the angel said to them, “Do not be afraid; for see—I am bringing you good news of great joy for all the people: to you is born this day in the city of David a Savior, who is the Messiah, the Lord.” (Luke 2:11-12, NRSV)

“Please see me before you leave for the day!”

The note was taped to my office door by a colleague at work. My heart sank a bit. We’d been working through several challenging situations and my first thought was, “What now?” As I entered her office a short time later, however, she smiled broadly. “I’ve got good news!” Immediately my whole body relaxed.

“Good news.” These are two words we all enjoy hearing. They often precede a birth announcement and engagement notice. They are heard in connection with promotions at work, victories in sporting events, or positive results from medical tests. What follows them is almost always pleasant, and quite often joy producing. Rarely is anyone put off by a good news announcement.

From the very beginning, the announcement of the birth of our Savior Jesus, God’s incarnational presence in our world, has been called “good news.” According to the angels this joy producing news was for “all the people!” That includes everyone. God has entered our broken and problem plagued world with the promise of salvation, abundant life, and purpose. What is there not to like in that message? But lately it seems, especially in the western world, many have lost confidence in the goodness and joy producing power of this message.

Much has been written about the tragic death of John Allen Chau, the young man who was killed while attempting to share the gospel with an unreached group of islanders off the coast of India. There is, undeniably, a need for conversation about Chau’s missiology and methodology, and even whether he should ever have attempted to go to this island.

There is one aspect of the conversation which followed his martyrdom, however, that has given me great concern. Many people, a number of them self-professing Christians, have decried attempts to take the good news to people who haven’t heard as culturally abusive and an unwanted intrusion into the lives of others. For these people, the idea that the gospel could be welcomed as good news and received with great joy by people hearing it for the first time is not only unbelievable, but dangerous and wrong. Rather than good news, these voices see the gospel as intrusive, manipulative, and unwelcomed. Yet there is much evidence that when the gospel in shared, even cross-culturally, in culturally sensitive and contextually appropriate ways, it is still an announcement of good news that is received with great joy.

Several years ago, Sue Koljeski, one of TMS Global’s cross-cultural witnesses, moved to West Africa to work in partnership with the Methodist Church of Ghana. She settled in a remote town on the border of Burkina Faso and began to learn the culture, language and traditions of the people there. Sometime later she discovered a very remote village where there was no active church presence, and where the good news was not known. With loving care, Sue formed relationships with the people there, ministering to the physical, emotional, and spiritual needs of the community, and sharing the good news of Jesus with them. 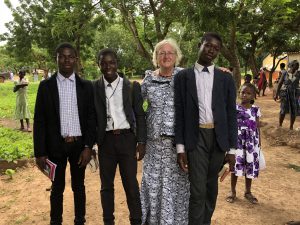 Sue and the young Christian boys who now have the Scriptures in their language.

Over the coming months and years, scores of people from this village, both young and old, received the message openly, became followers of Jesus and were baptized. Among them were three young boys who heard the message with gladness and responded with great joy. Intelligent and deeply desiring to know more about this good news, the boys longed to have the scriptures in their own language. Sue worked to make that happen.

On the day she arrived in the village with the Bibles, the three early adolescent boys excitedly raced off with their copies of the Word, each to his own tree, where they sat for hours devouring the scriptures. These young men became so enthusiastic about the life transformative power of the gospel message that they committed to sharing it with others. Indeed, they began to refer to each other as Prophet, Evangelist, and Pastor. And the people in the village began to refer to them in the same way! Today the lives of the entire village are being transformed in positive ways as a result of their embrace of this message. No wonder this good news produces great joy!

Sue retired a couple of months ago after many years of faithful service. She has returned to the United States, but not before having a wonderful farewell service in Ghana. I was blessed to be present for the almost 7 hour long affair, and witnessed multitudes of people celebrating with glad hearts and bearing witness to the life transforming power of the gospel among them. At the conclusion of the service, Prophet, Evangelist, and Pastor – the three young men – came forward to read a scriptural blessing over Sue, each testifying to their gratitude for Sue’s willingness to share with them that a Savior, Christ the Lord, had been born – for them!

Stories such as Sue’s are being repeated around the world and here at home on a regular basis by those who not only believe the angelic message, but are willing to embrace it as their own. Taking this good news to “all the people,” especially to those for whom it is truly news, they are discovering that this message is not only welcomed, but life changing. And that, I would contend, is good news indeed!