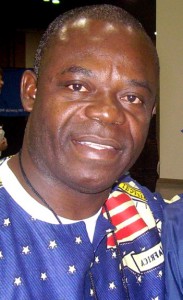 The Rev. Jerry Kulah, West Africa Central Conference Coordinator of the UMC Africa Initiative and the dean of the Gbarnga School of Theology, a United Methodist seminary in Liberia, is set to speak at the WCA launch event Friday, October 7.

Jerry is an ordained United Methodist clergyperson and has served as both a local church pastor as well as the Monrovia District Superintendent overseeing 35 churches. He has represented the Liberia Annual Conference as a delegate to General Conference.

With his miraculous story of escaping death during the Liberian civil war, Jerry has been instrumental in organizing Liberia’s non-denominational National Day of Prayer and is widely regarded as one of its most influential Christian leaders. He was also instrumental in bringing the medical mission Mercy Ships to Liberia that has blessed hundreds in need of medical services that would otherwise be out of reach.

Jerry’s sermon, “Methodists at the Crossroads,” inspired hundreds of people at the first worship service ever hosted by Africans at the 2016 General Conference. We are thrilled to have Jerry join us in Chicago.